He’s a nervous sex symbol and a reluctant pop star, but New Zealand soul singer Teeks is slowly becoming more comfortable in his own skin.

When we first meet at the offices of his record label Sony, Te Karehana Toi-Gardiner (Ngāpuhi, Ngāi Te Rangi, Ngāti Ranginui) greets me with a big nervous smile. He’s tall and has to bend down quite far to harirū. Dressed casually in a fleece and cap, he picks at a graphic red and black manicure throughout our interview. Before the interview even starts, aunty mode takes over and I tell him to stop picking at it. He laughs guiltily.

His friends call him TK but to an ever-widening global fan base he’s known as Teeks.

When the honey-voiced singer made his debut in 2017 with The Grapefruit Skies EP, audiences were immediately smitten by the languorous, 1960s inspired ballads, and not a little bit by his smouldering good looks.

In person, Toi-Gardiner is shy, with an energy that ebbs and flows depending on how confident he feels in the answer he’s giving. Talking about family is a sweet spot – he tells me he grew up in Hokianga, Coromandel and Tauranga, then back to Northland again, to the east coast. He’s a proud alumnus of Taipā Area School and a Te Taitokerau boy through and through. 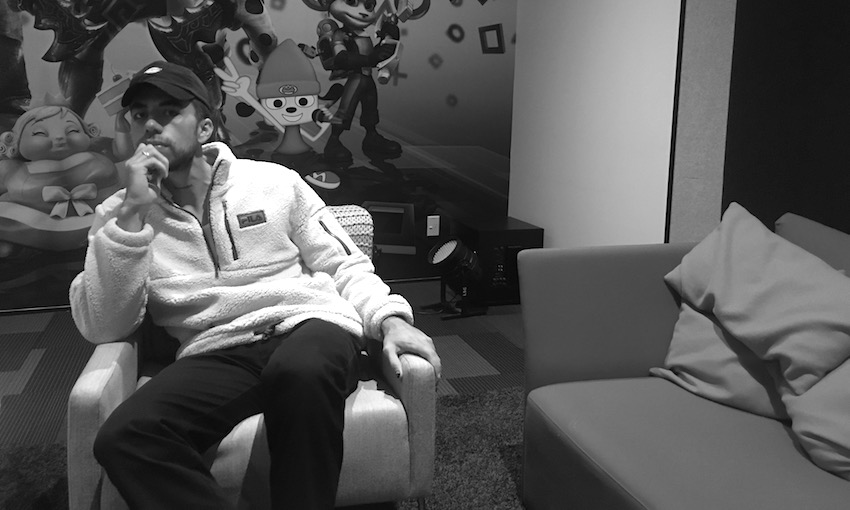 Both parents and two sisters are teachers so while he imagined it wasn’t a path he would take, before music became his main gig, fate led him to working part time as a kaiako at Unitec, teaching kura pō te reo Māori. “That’s not something I thought I’d ever do,” he says, settling into an oversized lounge chair with a Sony Playstation sign looming behind him. “I was always quite reluctant to go into education because of my family. It worked out really well, having a part time job while I was trying to do music. And it was nice being immersed in the culture and language. It’s not something I’ve had since moving away from home. You don’t want to lose that part of yourself.” These days music is a full-time job. His just-released debut album, Something To Feel, has been finished for some time – since before the Covid-19 pandemic even. He tells me he spent the first lockdown in 2020 with his sister in Hokianga, and relished the opportunity to do nothing “music related”.

“It’s so isolated up there anyway so we just did what we usually do. Go to the beach, did a lot of cooking.” His best dish is “some type of pasta”.

But this week won’t be the first time fans are hearing songs off the album. Toi-Gardiner broke the release into parts which he has fed to listeners since August last year. “Human beings consume music way too quickly now, they don’t really take the time to listen to the music as much as they used to. I wanted to give each song the opportunity to be heard.”

The first single, ‘Without You’, a pared-back ballad of intense longing, dropped in mid-August. And then five days later, to the delighted surprise of proud New Zealanders everywhere, the music video was debuted by none other than Vogue, who called him “New Zealand’s soulful singer to know”.

Part I followed soon after – just four songs, including ‘Without You’, and another four in November.

“I wanted to give each song the opportunity to be heard,” he says. “We could extend the life of the campaign, stretch it out quite a lot. Also it just gives you more space to observe how things are unfolding. Instead of just dropping an album and then people are like, ‘cool, what’s next?’ Like, nah, that took me ages! These are good songs.”

On Friday, part one and two disappeared from streaming services, and the album as a whole took their place.

“That was a cool thing for me, realising there’s no rules really. You can do what you want.”

He’s charmingly evasive when I ask who his love songs are about. “People!” he blurts amidst embarrassed giggles. “When I first started writing songs I wrote for the sake of writing, for the exercise. I didn’t necessarily write from personal experience. It was fictional. But as time went on I found that I was able to draw from personal experience. Now I can’t write without having some kind of personal connection to the song. The story might be this small, but you make it bigger.

“It’s almost like speaking in te reo Māori. You elaborate on small details and it seems so much more meaningful and poetic and metaphoric.” Hollie Smith and Teeks perform during the National Remembrance Service on March 29, 2019 in Christchurch. (Photo by Kai Schwoerer/Getty Images)

While the songs on Something to Feel are all written in English, Toi-Gardiner regularly sings live in te reo Māori. His duet of ‘Whakaaria Mai’ with singer Hollie Smith went viral after the pair performed at the remembrance service in Christchurch on the first anniversary of the mosque attacks, and ‘E Kore Rawa e Wehe’, the translated version of his 2017 hit ‘Never Be Apart’ from the Hinewehi Mohi-produced Waiata/Anthems, is on high rotation on iwi radio.

He’s aware that the industry’s relationship to te reo and to Māori artists has been bleak historically. “It’s in a better place than it’s ever been, but there’s still a lot more work to do. Māori artists have so much to offer and there’s so much talent out there. Even the people I looked up to growing up, for example Seth Haapu and Ria Hall, they came through Sony as well and they had … a different experience.”

He says from the outset he and his manager, Cilla Ruha (wife of musician Rob Ruha), approached the record label relationship “like a Treaty partnership”.

“We spent a lot of time before we signed anything, just making sure the relationship was right. It’s working because we brought the two worlds together. When we signed the contract I brought my family in and we had karakia, we did it how we would do it in te ao Māori. I think it started something.”

He’s still unsure what being a Māori artist means to the wider industry. “Like when I won the “best Māori artist” award in 2017. I’m still like, what does this mean? I’m grateful but I don’t really know what that means. I hadn’t been writing in te reo Māori. I think there’s still a lot of understanding that needs to take place.”

In December, Toi-Gardiner embarked on his first headline tour. The stripped-back live show saw him performing with a piano and string quartet in intimate settings – including St Lukes church in Hokianga. He says he was nervous to play in front of his home crowds there and in Tauranga. “I’ve never played at home before in front of my own people, so that’s scary for me.”

While the shows were heralded as a huge success – and will be followed by a just-announced larger national tour in June – the extra attention didn’t go to his head. “I have a large family, they keep me humble,” he laughs. “It’s good to have that to remind you where you come from.”

At a handful of the live shows, Toi-Gardiner surprised the crowd by inviting a young woman on stage to serenade. It’s a surprising move from someone who confesses to be “shy and awkward”.

He is, however, becoming more comfortable with how others perceive him. I ask him frankly how he feels about the hordes of men and women that believe he is a sexy Jesus sent from heaven. He giggles. “More recently, I’ve become more conscious of it. I don’t hate it. For me, that self-confidence has been positive. I feel like I’ve grown so much in the past few years in feeling confident in myself, finding different ways to express myself. It’s just that kind of reassurance. I’m quite self-conscious and lately that’s faded away more. I’ve just grown and become more confident.”

Dropping another song from the album tomorrow and let’s just say, if you thought I was sexy before you ain’t heard nothing yet 🥲

He’s particular about the aesthetic of his image. “I’m intentional about the things that I put out there, whether it’s art or music or photos or video. I have an eye and I know how I want things to be. Lately I’ve just wanted to be across everything as much as possible, beyond music.”

I call him a control freak. “That’s probably what they say!”

“I haven’t always been like this, having that confidence and assurance that I know what I want.”

His new-found confidence extended to making his directorial debut for the ‘Remember Me’ music video. What he lacked in experience, he says, he made up for with the talented friends and family he drew into the project.

“Directing the ‘Remember Me’ video was a cool experience; I chose who I wanted to work with. It was friends, family, a Māori-led crew. At one one point I said, “Oh no, I should have got a director, I don’t know what I’m doing!” He laughs. “But we did it, and I enjoyed it. Having that support from people who believe in you. I needed it.”

He’s also wearing his heart on his sleeve when it comes to the messages he puts out on his social media platforms – it’s a responsibility he takes seriously. Throughout the Black Lives Matters protests he made his support clear, and brought to light issues closer to home. He’s unafraid to call out politicians and racist media personalities, and even express his own exploration of femininity.

“When you have a platform, you have a responsibility to make sure you’re serving the people, and making sure the information you’re sharing is true and authentic. Even self-reflection,” he says thoughtfully.

Much like the Treaty-based relationships he’s embedding in his work life, he’s determined to bring “his people” along for the ride.

“I want to work with Māori because I know that we’re capable and that we can make cool shit. In the mainstream sector of the music industry, like every other industry, it’s just Pākehā, Pākehā, Pākehā. So it’s cool to bring our people into these spaces. We have so much talent. We just need the resources, and that’s what these guys are here for,” he laughs, pointing at the large Sony sign behind him.

He says he’s intensely lucky to do what he does. “I feel so grateful!” He says his success belongs to the crowds at shows, to the people who stream his music, to the messages from people who say they had the first dance at their wedding to one of his songs. “Once you release the songs, they don’t belong to you any more and it’s cool to hear those stories. Makes it’s bigger than myself. I love it,” he says.

“Music is art, it’s symbiotic. It benefits me, and the listener. More recently I’ve thought about the pressure of that, realising that it’s not just about me. It’s good, it’s complex. Music is complex.”

This content, like Teeks’ album Something to Feel, was created with the support of NZ on Air.