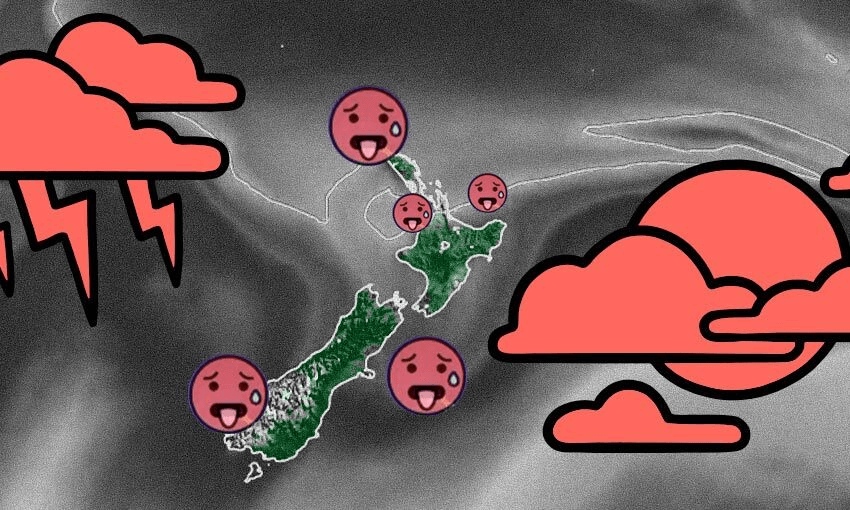 The weather has gotten uncomfortably hot and humid around the country. How long will this sweaty reality last?

It’s glisten weather, when the boundary between skin and air is softened by a sweaty glow. Metservice has described the reason for my glisten as “an atmospheric river of warm and moist air”. This river is bringing heavy rain to Te Waipounamu’s west coast and warm humidity to the rest of us. In Tāmaki Makaurau temperatures for the rest of the week are predicted to hit 28 degrees and not fall under a sticky 22 degrees. For those averse to numbers, this is “significantly hot” according to the mild-mannered MetService.

But to say it’s glisten weather may be rolling a turd in glitter. The North Island has had meagre rainfall this year – Niwa’s “Hotspot Watch”, which assesses soil moisture, shows most of Te Ika-a-Māui in fiery red, orange or yellow, meaning the soil is very dry. However, this is preferable to Westport’s evacuation and near-miss of a major flood last weekend. Here at The Spinoff, there are complaints of “it’s too hot to sleep”, “there’s so many flies”, “my furnace bedroom is full of mozzies” and “I can’t work in this weather!”. It may be more accurate to describe us as whining, wilting flowers than anything glistening.

As delicate petals, we need to know: is this Auckland’s new normal? Will we be forever shiny and wilted in the summers to come?

Peter Little, MetService meteorologist, justifies our complaints. Using Auckland Airport as a long-monitored site from which to draw data, he calculates January’s average temperature was about 3.5 degrees hotter than previous years, and February too has started warmer than usual. For those of us struggling to sleep, tossing and turning or relocating to cool tiled floors, it is the overnight temperatures at fault. Little says they haven’t dropped below 18 degrees this month. Add to that the “very, very, very muggy conditions” which make everything feel hotter and you’ve got a lot of bothered Aucklanders.

Niwa meteorologist and forecaster Ben Noll has been “asked a lot about humidity in the last couple of days”. He describes Auckland as exposed, meaning there’s nothing to block humid air masses coming from the north – no Southern Alps or Central Plateau to catch the moisture. In northerly winds, the humidity just blows right on in. In the last few days, this has caused conditions in Auckland to be comparable to places like New Caledonia, Vanuatu and Fiji.

Without travelling, we have found ourselves in the tropics. We should get ready to stay.

Noll expects “warmth to continue to increase” over coming summers. According to Auckland Council, our mean annual temperature has risen about 1.6 degrees in the past 100 years. The way things (emissions) are going, this heating up will accelerate – by 2100 our average temperature is predicted to rise 3.5 degrees. Noll adds to this: “Warmer air can help to evaporate more ocean water… leading to more moisture in the atmosphere which we feel as more humidity. That is part of our future climate.”

Combining temperature and humidity data allows scientists to model “effective temperature”, a measurement that accounts for the glisten effect. Sweat is our body’s cooling system. As it evaporates, it transfers the body’s heat into the air – but in high humidity the air is saturated with water so evaporation takes longer. Thus the glisten.

I always imagined time on tropical islands to be defined by icy cocktails on a sun-lounger punctuated by swims in crystal-clear waters. But this is where the glitter slips off the turd. I’m keeping the curtains drawn against the sun in my inner-city shoebox apartment, and checking Safeswim, a website which gives live updates of local water quality, since beaches are so often contaminated especially after rain. The water situation is communicated in a series of icons: a green tick for “low risk of illness”, a red cross for “high risk of illness”, a black cross for “very high risk of illness”, and the worst: a red swimming man with an X for “Water quality consistently poor, swimming not advised”. Most visits to the website end in questions: If there’s a green tick next to a red cross, or a green tick surrounded by several black Xs, is it a yeah or a nah?

Noll’s consolation is that our temperatures will never reach that of Australia. “The fact we are surrounded by the ocean does have a moderating effect on the air temperature, it doesn’t allow the temperature to get quite as hot.” Unfortunately he does caveat this with “but our humidity levels are higher”.

Humidity is expected to reach a peak this Saturday, ease off next week, return later in February and continue into March. The heat will continue.

Little has some advice for wilting flowers: “Keep hydrated, stay in the shade, wear a hat if you’re outside, and if you have air conditioning, make the most of it.”

Gabi Lardies is a cadet in the Next Page cadetship programme, public interest journalism funded through NZ On Air. She will be working with The Spinoff for four weeks before working with Metro, North & South, New Zealand Geographic and Pantograph Punch.

Next Page
Made possible by