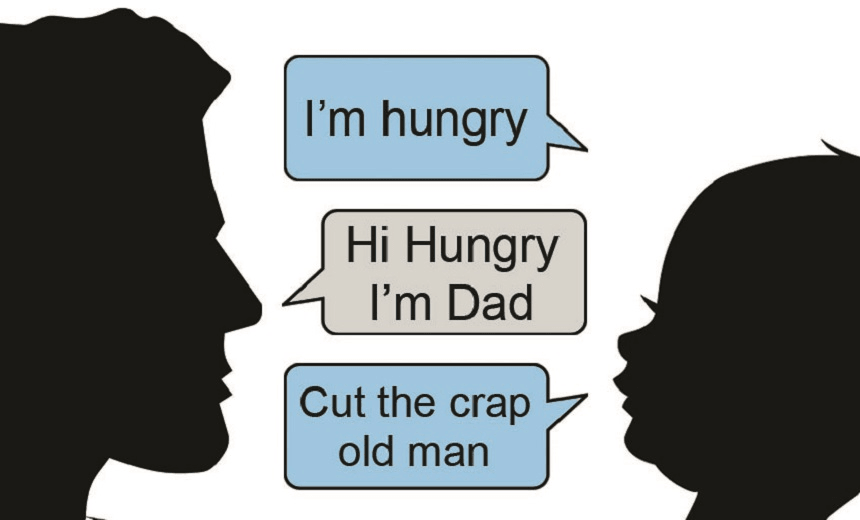 Not funny: A dad explains the art of dad jokes

Adam Mamo knew that part of being a dad was being able to do dad jokes. This is his inspiring story of how he discovered his inner dad comedian.

I thought it would just happen. I’d witness the birth of my first child and my head would click suddenly to the side twice and I’d cut loose the first of many cheesy one-liners. But it just didn’t happen, and of all the horrors of being present at a birth, realising that dad humour wasn’t automated was the worst. Looking back, it may not have been an optimum time for jokes anyway.

Months later, a pea slipped from my plate at dinnertime and as I bent down to pick it up my wife said, “look an escape-pea.” I laughed lightly, but inside I died a little. Not only was my dad humour weak, it wasn’t even the best dad humour in my own home. Tough break when you’re the only dad.

I had to do something, and following painstaking online research lasting tens of minutes, I deciphered the cryptic formula of perfect dad humour. Now, no father need live with the shame of only cracking genuinely funny jokes and can annoy his brood with epic groan-inducing dad gags.

The temple of dad humour is built on a foundation of puns. Traditionally it’s the most important element of dad humour and a strong pun game means a strong dad jokes game. For best-practice delivery, make sure the pun word is emphasised, then pause for as long as it takes to get a reaction. A ripper pun needs to breathe; let it hang in the air and don’t ruin it by saying “pun not intended”. Dads should never apologise for punning.

When dealing with a tough crowd like cool teenagers, keep repeating the pun sentence until you receive recognition of your awesomeness. If they refuse to budge, you can say “Get it” twice, but not three times. Have some self-respect.

Remember, anytime is a good time for a pun. For example, a regulation school pick up offers multiple opportunities:

“OMG did you hear there was a kidnapping at your school today? It’s ok now, he woke up.”

“Wow there’s so much construction around here, I’ve got a joke about construction. Oh nah, I’m still working on it. Hey, that guy’s got a shovel, it was a ground-breaking invention that.”

Only dads understand the true value of repetition when it comes to jokes. That said, comedy is all about timing. When hearing a joke as it reaches the masses, just hang back and remember it. Then wait at least a month, before telling the joke to each member of your family individually but while you’re all together. Repeat every month until they develop genuine concern about your health.

Deliberate misinterpretation can lead to hijinks

After puns, deliberate misinterpretation is the most important tool in a dad’s comedic bag. The best part of misinterpretation clowning around is seeing how long you can keep it going. Don’t let the anger and frustration fool you – kids absolutely love this game. If they rephrase, it’s a clear sign they want to keep playing; just misinterpret again. Proceed until someone cries or you get called a dick.

Pass it down. How will your own kids know how to dad joke when the time comes if you’re not role modelling how dads have done it for generations? The racist and sexist stuff is best left in the last century, but your own dad probably laid out a blueprint of how to dad joke. Revisit his classics and if you feel guilty about plagiarising, finish the gags with “that’s what granddad always said”. Proceed until someone cries or you hear “granddad’s a dick as well”.

From “got your nose” to the magic detachable finger, kids dig physical humour. Who can forget the first time they got stung with “pull my finger”? Hilarity ensued that day, and it can again. Tickling is a classic move but has a bad rap now and those LOLs aren’t truly earned anyway. Horse bites, armpit fart noise generation and “why are you hitting yourself” foolery is always warmly welcomed.

Laugh at your own gags

A joke is never a failure if at least one person laughs at it. Finish all your zingers with a hearty chortle. This not only qualifies the joke as an immediate success it also alerts those around you that you’re on-form and to give you the attention your comedic prowess deserves.

Get down with new school vernacular

Kids just love it when they learn some mean new street talk and their dad shares in its usage. If you want to be the most lit dad in your hood then stay woke with fresh slang from the shorties. Never worry about using it correctly, that will just slow you down and inhibit your freedom to bust out totes sick phrases anytime you want. Extra points for dropping text acronyms into verbal speech, LMFAO, and for continuing to use on fleek expressions long after everyone else has stopped. As a dad you’re all about squad goals so it isn’t right for young haters to throw shade on you. If they do, tell them that you and their mum are going to Netflix and chill that night. YOLO.

Now you have no excuse for weak dad humour. Key points to remember are to work on your puns, always crack yourself up and if it’s an above average dad joke, everyone deserves to hear it more than once. If all else fails tune into Simon and Gary on More FM: they’re the grand masters of dad humour and have stalled on its bleeding edge for the past thirty years. Peace out.