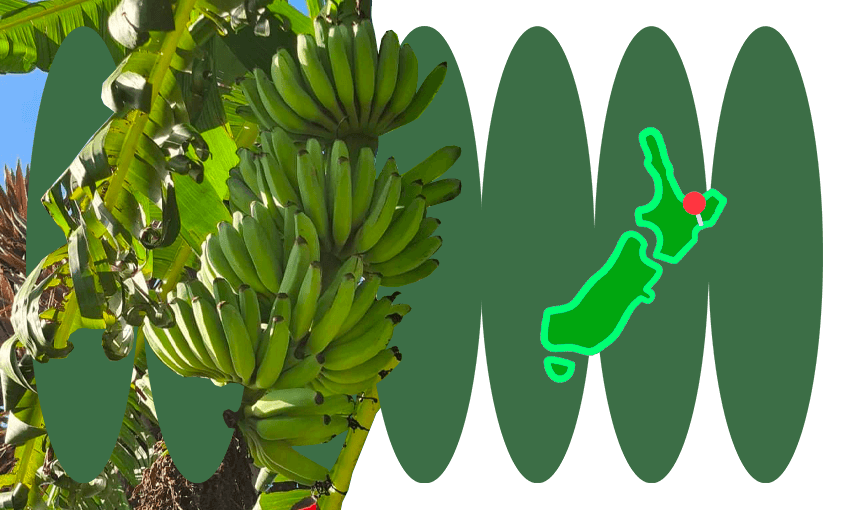 Gisborne growers want to bring local bananas to the table

In this story from the Electric Highway, Don Rowe learns about an East Coast effort to change how we source one of our favourite crops.

From the dry Canterbury plains to the sodden West Coast paddocks, through the arable central North Island, up the west coast and onwards to the Far North; as I travelled the country in the BMW iX, one thing was very clear: there’s a hell of a lot of farmland in this country. Cows, sheep, deer – the odd bloody old alpaca – animals line the roadside through every region and every climate in New Zealand. Behind them, the orchards: avocados, apples, berries of all stripes. But conspicuously absent from almost the entire nation is one crowd-pleaser of a crop.

Bananas are far and away the most popular fruit in New Zealand. Supermarket figures show that 80% of customers going into the fruit and vege section will buy bananas – apples are a distant second around 60%. The country is one of the leading importers in the world. But the vast majority are imported from places like Ecuador and the Philippines, with huge costs environmentally and to the lives of the people who produce them. Workers in the Philippines can spend their whole lives on the plantation, suffering gruelling conditions, low wages and exposure to harmful pesticides in order to feed Kiwi customers.

So why don’t we grow them here? It’s long been assumed that producing bananas commercially is not possible in New Zealand. But Trevor Mills, Tai Pukenga banana project manager, argues that’s no longer the case. The warming climate and further research into the viability of banana crops is seeing a boom in production across the motu.

In fact, proof of concept has existed at a hobbyist level for almost 70 years. “We’ve got photographs from the mid-1950s of a full-page pictorial of this guy out in Ormond growing all these tropical fruits and bananas and all sorts of other things. A local guy Roger Bodle is a hobbyist in his 80s now – and he’s been growing bananas in Gisborne since he was given a plant when he was 13.”

“And as the climate becomes more tropical, tropical fruits are going to really enjoy it. On the flip side, if there is an accelerating change to a more tropical climate as it looks like we’re seeing, crops like grapes and kiwifruit and apples could struggle.”

Banana farmers could also avoid the huge licensing costs seen in other fruit, says Mills. Gold kiwifruit growers pay around $800,000 a hectare, he says, with another $100,000 per hectare outlaid on netting to protect the fruit. Bananas almost propagate themselves, says Mills, with a single plant potentiating many more – and quickly.

“The planting rate that we calculate is about 500 plants per acre, or 1,000 per hectare. If you put 100 plants in, within 18 months you’re going to get up to five or six suckers, or second generation plants, growing around the original plant. That’s when your total number of plants from the original 100 can get up to 400 or 500 by the second generation.”

“Thirty years ago a place like Turkey barely had a single banana growing. Now they’re exporting 800,000 tons of bananas per year. Why couldn’t we do the same thing?”

Approximately 35,000 cartons of bananas arrive in New Zealand every week from South America alone, says Mills. The fruit is still green and must be sprayed with ethylene in order for their skin to turn yellow. But internally, they remain a substandard product. “We’ve proved with our trials that we can produce a superior product here in taste and sweetness and flavour, without the chemicals.”

Mills says banana crops are an increasingly attractive possibility for Māori incorporations, creating employment and a more productive and less intensive form of farming than running livestock. “I’ve been in talks with Te Puni Kokiri and they’re keen to motivate a number of Māori incorporations from places like the East Cape right down to Masterton and Wairarapa in the south. They can see the potential that horticulture has to create more employment for Māori, more investment and more productive use of the land, rather than just having a few sheep on land that is tailor-made for horticulture.’

In 2019, Tai Pukenga received around $94,000 through the Vision Matauranga Capability Fund, which was used to grow a trial crop of bananas at Ormond. The money also funded the creation of a method of producing banana plants through tissue culture methods for the first time in New Zealand, greatly diminishing the time it takes to cultivate banana crops. Crown Entity Plant & Food Research have also expressed interest in bananas, says Mills, with development managers set to visit the area in June.

Further south, NIWA scientist Bernard Milville has established a plot in Nūhaka, utilising his background to locate a site he believes is suitable for growing bananas and other tropical crops – at the moment he’s cultivating everything from red pineapples to mountain paw paw.

“That will really be a demonstration to the local farmers that there is potential in growing tropical plants and tropical fruit. And that grassroots development is the secret I think. If you get the right sort of people pushing the right sort of vision, it’s amazing. Northland growers have got a three to four-year head start on this, and I know one grower up there can take 100kg of bananas to the Whangarei farmers market and sell them in half an hour at $8 a kg.

“People will pay that, no questions asked, because of the superior product that the bananas are. The possibilities for farmers and the environment are massive.”