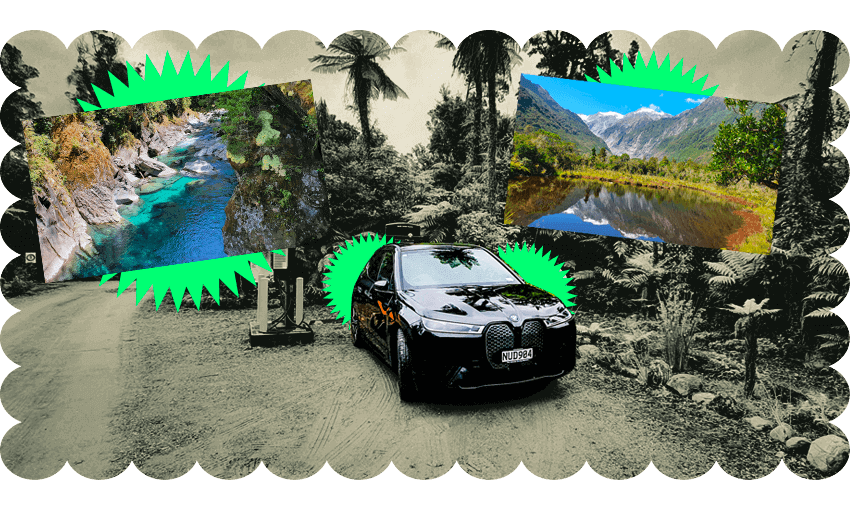 In his final story from the Electric Highway, Don Rowe looks back on his journey and finds a good few things to be optimistic about.

There’s a saying I love, one used by hunters and trampers both. Looking at a map, or reaching the top of a hill, they’ll put their hands on their hips, take a deep breath and summarise their feelings with a grammatically questionable, yet somehow profound, “She’s pretty big country, mate.”

In literal terms, we do live in a pretty big country. According to this map, tweeted out by aunty Helen Clark, the distance from Kapowairua in the Far North to Rakiura in the south is roughly comparable to the distance between Copenhagen, Denmark, and the foothills of the Pyrenees in France. There’s a lot to see – white sand beaches, temperate rainforests, alpine deserts, roaring coasts, ancient glaciers, pumping surf breaks, penguins, seals, the almost definitely haunted Otira Stagecoach Hotel.

This story from the Electric Highway is brought to you by BMW i, pioneering the new era of electric vehicles. To learn more about the style, power and sustainability of the all-electric BMW i model range, visit bmw.co.nz.

It doesn’t always feel that way. Over the last two years our geographic and psychological isolation has shrunk our collective world, emphasising the distances between us. I saw that in Franz Josef, where the traditionally buzzing hostels were empty, the ghosts of the pioneers on the walls were somehow a little more frightening than usual.

There’s another saying I like a little less, just on an aesthetic level, although I understand and agree with its premise. You will have heard it: “Do something new, New Zealand.” While admittedly jarring at a time where doing something as new as buying the fancy-pants tinned tomatoes feels difficult, the beauty of this place is that you can do a lot with a little out on the road.

The country is riddled with DOC campsites, like at Hans Bay on the West Coast, where for $8 you can wake to the sound of weka tearing into last night’s sausages and smoked fish. I slept on the ground in my one-man tent, on an old opshop duvet, but it wouldn’t take much to do it better. Hiking up Roy’s Peak, or surfing at Raglan, or dragging yourself across the lunar dunes at Te Paki, there is no charge for some of the more stunning experiences in Aotearoa. And as chronicled in this series, these days you can even do it without spending a cent on petrol.

It’s hard to rank the stories I heard over summer. And it’s probably unnecessary. Everyone I met on the road restored my faith in our collective worth at this particular point in time. Far from the ugly scenes on Parliament’s grounds, Aotearoa is still a fundamentally good place full of good people, doing what they can to make life a little bit better for each other – giving away food, caring for the land, searching for ways to prepare for a rapidly changing world.

It was a valuable reminder as a journalist; nobody in this industry is immune from internet-poisoned cynicism, a “seen it all before” attitude or the nonsense conviction that you alone have the true pulse of the country, that you know How People Really Feel. We all know that social media, and the media more broadly, doesn’t always reflect reality. That’s true here, with the exception of the landscapes. Aotearoa really does look as good as we think it does.

This was evident crossing the Cook Strait on my way back to Wellington. Stuck in Picton with no booking, I lined up outside the Bluebridge office at five in the morning, trying to talk my way onto the boat. I wasn’t alone; a group of imam, young labourers, seasonal workers from Fiji, a couple of old hippies with a bus growing moss. There are a whole range of different people in New Zealand, living their lives, moving amongst each other more harmoniously than you’d expect from watching the news. Sailing through the Marlborough Sounds at dawn, with dolphins and penguins alongside the boat, it wasn’t hard to start feeling a little bit kumbaya.

There was real pain in returning the iX. My own car, bought when I ran home from London with Covid on my heels, is worth roughly 2% of the value and feels roughly 2000% more garbage. I’m a student again now, so an upgrade is about as far in the future as cars that fly, but the project did sell me on the possibilities of electric vehicles. And I’m not alone, the boom is undeniable – walking to university, it feels like every second car is electric, and an increasing chunk of the buses. Ownership of a car is an inherently consumeristic choice, but I’m optimistic that this shift towards electrification is at least in part a true reflection of the real desire we have to do better.

So while my rust bucket might be parked in the driveway, and my trip an increasingly distant memory (albeit one with a decent scrapbook), it’s still good to be home in this pretty big country.