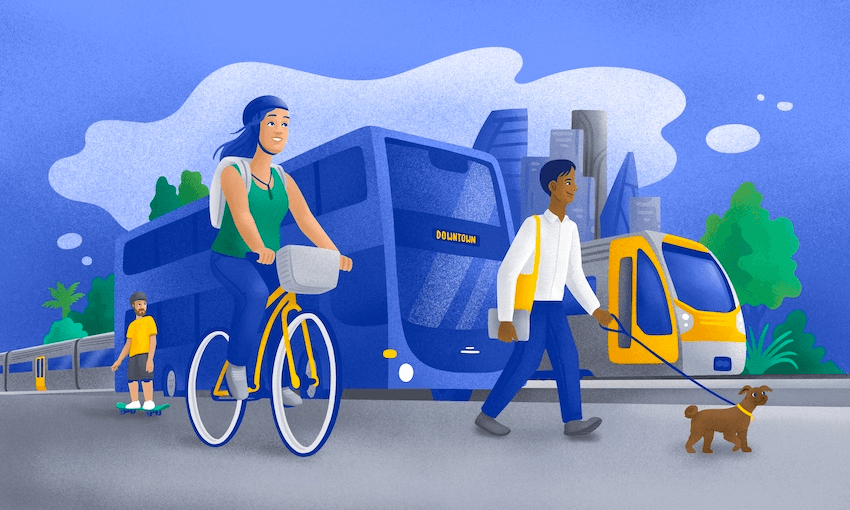 New Zealand’s public transport systems require a major update, but any conversation on what’s needed has to consider equity as much as the environment.

This content was created in paid partnership with WSP New Zealand.

The argument for using public transport is simple – when it’s quick, affordable, safe and reliable. In this world, the start and end points of each trip would be close to the bus stop or train station, or have adequate cycleways and footpaths servicing them. Those stops and stations would be well-lit and have clear signage – with audio announcements for those unable to read the timetables – and they’d be serviced often. There would be secure bike parking at each point, serviced by cycleways safe from swinging car doors and wide enough to hold both the speedy e-bike commuter and the parent pulling two kids in a trailer.

But the reality of New Zealand’s public transport is far from this idyll. In our main centres, services cater mainly to those heading to and from the city at either end of their nine-to-five jobs. Footpaths are often designed as an afterthought to the roads they border, not quite wide enough to pass others on – especially when trying to social distance – and while the number of cycleways is increasing, there is still work to be done on their public reputation.

The issues with our transport systems across New Zealand are broad, and when layered with our need to decarbonise transport in order to reach our goal of net-zero emissions by 2050, there’s an urgency to fixing these issues too.

Holly Walker, WSP fellow at the Helen Clark Foundation, says there is no way to reach that 2050 goal without some serious behavioural change.

“To have any chance of meeting our target, we have to address emissions from private vehicles. And the only way to do that is for people to drive less in the future. There’s no two ways about it.”

For Walker, though, there’s little use in trying to convince private car users to opt instead for the bus or train without also pushing for significant changes in our transport system. She’s clear that we need to reduce our reliance on private transport, but believes for that to happen we first need better alternatives in place.

“We have to change the way our transport infrastructure is configured to make it the easiest, most practical, most appealing, most convenient transport option – and to make driving less appealing.”

Those changes include more than just increased frequency or additional transport options. According to Roger Burra, technical principal for transport planning and advisory at WSP, accessibility needs to be top of the list when planning public transport – and that means more than just lowering the front of the bus for those who can’t make the step. He says there are three main aspects within “accessibility”.

The first is spatial proximity – how close you are to the things you need to access. The second relates to mobility – how far you have to walk to get to public transport, how many different roads the bus services or rail lines go to, and the accessibility of people with different needs. Finally, Burra says digital access is important in helping people access what they need, when they need it. Whether that be up-to-date information on scheduling, or online appointments that mean people don’t have to travel in the first place, digital accessibility can change people’s relationships with travel.

“Accessibility is the combination of those three aspects. If you make a really big change to the transport system it will actually impact the shape of the city and where people live. It’s not a static environment.”

Vivienne Ivory is the technical principal of social science resilience public health at WSP. She says there are many demographics who find themselves disadvantaged by the current public transport system – often in non-obvious ways – and for whom accessibility needs to be designed.

“If you don’t feel safe or it’s not possible or practical or it’s too expensive, then that decreases the accessibility of public transport for particular parts of society.”

Some of the real conditions impacting accessibility seem almost mundane, but speak to ingrained societal mores. Giving an everyday example, Ivory points to the enduring expectation that women assume the lion’s share of domestic labour, even in multiple-income households.

“Women tend to be more responsible for household-level things, so they tend to do more trip-chaining, where you don’t just go to and from work, you do things along the way. That’s been a traditional pattern and it’s still fairly dominant and means their transport needs are complicated.”

“International research about indigenous populations in many countries indicates that indigenous groups tend not to benefit equitably from the way that public transport systems have developed. They don’t experience the same level of mobility as wider populations.”

So how do we begin to tackle the issues that are making our transport system inaccessible for so many groups of people? It’s about consultation and discussion, and not just with the loudest voices.

For Ivory, that planning involves speaking to real communities about how they use the transport systems around them. Asking the people who live and work in the area what they think about their transport options helps to paint a clear picture of what’s working and what’s not.

“If we find that actually the cyclists or the bus users do feel really unsafe in this place and they would love to take another route instead, then you can start to shape a conversation about mobility rather than parking. I think when we’re looking at these big changes that are going on, the resistance is because we’re not having those conversations.”

Burra says that resistance often comes from people who aren’t looking at the long-term developments that new infrastructure will cater for.

“They think ‘I’ve only ever seen two cyclists down this road, why are we designing cycleways for two cyclists?’ They don’t recognise that in the future there could be twice as many people living in a particular area or consider other things that might change the dynamic.”

The sustainable transport pyramid illustrates the optimal shares of each mode of transport, with walking, wheeling and cycling coming ahead of public transport like buses and trains. Walker says we need to make sure governments aren’t just focusing on public transport vehicles as we aim to reach zero emissions, but investing in infrastructure to make emission-free transport more viable for everyone.

“Those are the modes that have the biggest impacts on our emissions reductions and on equity as well, because they have real health and wellbeing benefits.

For Walker, creating an equitable transport system can happen at the same time as making efforts to decarbonise.

“People talk about a just transition for climate change. That’s things like upholding the Treaty of Waitangi and working in partnership with Māori, making sure there’s representation from disadvantaged groups and communities on the governance and decision making bodies that decide what our transport systems look like. It’s co-designing the solutions with the affected communities.”

Private car ownership being the only easily viable transport option in some areas can further disadvantage those in low-income households. Concepts like forced car ownership – where cars are “forced” on people because no alternative transport is available – illustrate the need for equitable transport systems that better service our disadvantaged communities. By creating these systems, decarbonisation will happen far more organically.

Part of the future transport system also needs to take into account the changing shape of communities. The 20-minute city model, where all essential services can be accessed within a short trip from home, would change how people interact with their environment. According to Ivory, implementing that model more deliberately and widely will help to drive down the number of cars on the road.

“New Zealand research showed us that people living in neighbourhoods with a denser number of destinations walked more by quite a margin, compared to places like the cul de sac neighbourhoods where there’s barely a dairy.”

“We are a product of our environment, of the transport systems that were given to us, of the cycle networks and footpaths and buses we’ve got and individuals will choose to use those if they work, so if as a society we want people to travel like that, we should plan for it.”