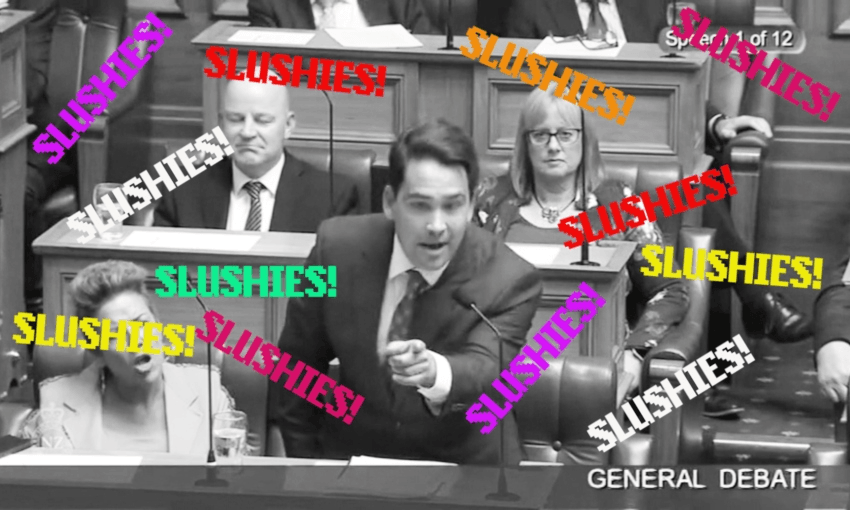 Every frame of Simon Bridges yelling ‘slushies!’ in parliament, analysed

On May 1st 2019, Simon Bridges stood up in parliament and yelled the word “slushies” at the government. Madeleine Chapman dives deep into the slush.

Hon SIMON BRIDGES: So what has the Government delivered?

So reads the Hansard transcript of the general debate in Parliament, dated 1 May 2019. It reads so innocuous. Simply a mild joke delivered in what a reader can only assume is the bored voice of a tired politician. Probably not even worth watching the video of it. Because the video definitely doesn’t show a leader of the opposition yelling the word ‘slushies’ at the top of his lungs while gleefully pointing at the government.

Hm? What was that?

If I were being conservative I’d estimate that I’ve watched this 22 second clip 157 times. I have analysed every face, movement, and inflection. Were you asleep at two o’clock this morning? Lucky for some. I was measuring the shine on Matt Doocey’s forehead.

This clip will become part of this nation’s political history and deserves a full breakdown and analysis. Here it is.

Before Bridges has even begun, he’s losing the crowd. Chlöe Swarbrick is out, operating under the false belief that she has somewhere better to be. Swarbrick is a Miami Heat fan, leaving Game 6 of the 2013 NBA finals early, only to miss out on a historic moment (except Bridges yelling “slushies!” repeatedly is somehow more exhilarating than Ray Allen draining that corner three).

Bridges warms up by adjusting his tuck-in and buttoning up his suit jacket. This is the political equivalent of cracking your neck muscles and putting on your knuckle duster. He’s had well over an hour of Question Time to rehearse his opening remarks. It has to absolutely kill.

“The prime minister has said, and she’s made it quite clear, this is the year of delivery,” he says, setting himself up for his own punchline.

Next to Bridges is Paula Bennett. She’s nervous. She’s read his opening remarks and knows she could deliver them better. Could Judith Collins? I’m sure we’ll find out soon enough. Meanwhile, behind Bridges, junior whip Matt Doocey and senior whip Babara Kuriger already have their smiles in position, ready to support their leader.

“So what has the government delivered?”

What a set up. He could say so many things next to dunk on the government. “Not a capital gains tax” is one of them. His support crew are perched in anticipation. Kuriger looks genuinely bored.

Someone on the opposition side yells out “nothing!”, a great response. Doocey, in a blatant attempt to take Kuriger’s senior whip crown, emphatically shakes his head, eyes closed. A beautiful, restrained performance.

“Slushies!” Bridges yells his punchline(?) so fast his support crew take a moment to react. Poor Doocey’s still shaking his head. That point, and that body language, screams on thing and one thing only: nark. I look at Bridges pointing like that and all I see is a kid on the playground at lunchtime who’s just spotted someone trying to wag. Next thing he’s gonna turn and find a teacher to beckon.

I knew it. Only a seasoned “I’m telling mum/the teacher” nark has a point  technique like that.

Bridges’ biggest fan at this point is Grant Robertson. There is such a thing as aggressively laughing when you’ve been burned but something tells me that in this instance, Robertson is genuinely laughing at the point and the yelling. Even though his face is only four pixels in this image, it’s clear that Winston Peters is also grinning.

Bridges, buoyed by the reactions around him, manages to increase his volume. “KELVIN DAVIS,” he yells into the microphone, the first, but not last, time he’ll blow out your speakers in 22 seconds. “Kelvin Davis says 193 slushy machines, at nearly $6,000 each.”

This is my attempt at conveying, through a static medium, the experience of listening to Simon Bridges deliver the line “Well Grant Robertson drank them all”.

The repeated point, the repeated blowing out of the mic, the repeated slightly dazed look on the faces of those around him. Some people can see sounds and hear colours. I’m not one of those people and yet the sound of this moment made me need glasses.

Doocey might be late to the party but he’s making up for lost time. Look at that grin. Kuriger is remaining staunch, either because they’ve agreed upon a good cop-bad cop routine, or because, well…was that a fat joke? It was a fat joke. right? It was certainly delivered in a fat joke manner. Meaning it was screamed borderline incoherently in a panic after the initial zinger wasn’t as well received as he’d hoped. And yet somehow Bridges screaming a fat joke at Robertson will be the least remembered moment of this clip.

Bridges is struggling. He’s admitted to cherry picking an issue he thought his supporters would get behind, and has instead united the nation in their dismissal of him both on this issue and as a party leader. But weeks, months, years from now, when Bridges is almost certainly no longer the leader of the National Party, we can look back on this moment and fondly remember.