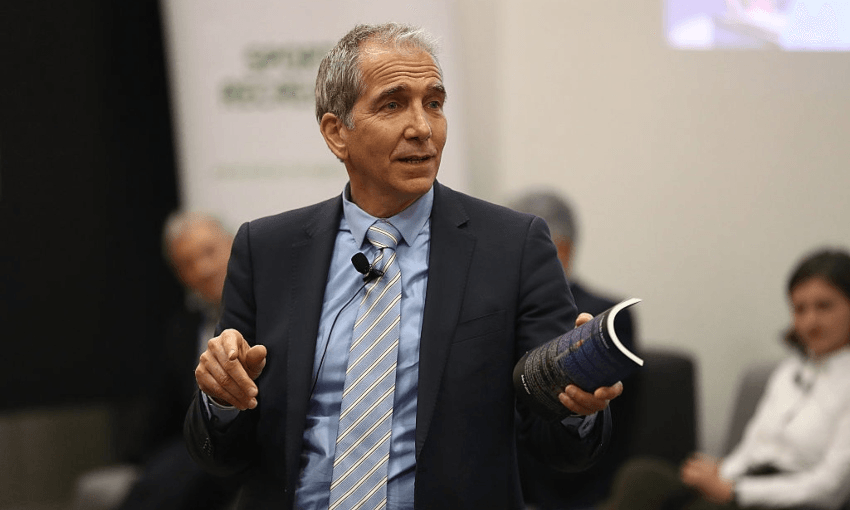 John Palino is running for parliament – from Florida

Former Auckland mayoral candidate John Palino has joined a fledgling party in a bid to make it into parliament, 13,000 km away from his current home, reports Alex Braae.

Former Auckland restaurateur and mayoral candidate John Palino is mounting a bid for parliament this year, from the unlikely campaign base of the US state of Florida.

Palino has signed on to be a list candidate for the fledgling Tea Party, which stands for the Taxpayers and Entrepreneurs Alliance. He was approached to stand by party co-leader John Hong, a former Panuku Development executive who last year placed 4th in the Auckland mayoral race, which Palino himself initially stood in before dropping out.

The Tea Party – no relation to the US conservative movement of the same name – is running on a platform of support for business, opposition to capital gains taxes, opposition to recreational drugs, and embracing migration and multiculturalism. It was formally registered earlier this year, and is yet to appear in any polling.

Palino, who emigrated from the US 25 years ago, travelled with his wife and young son to Florida at the end of last year, with plans to introduce their child to his extended family. They planned to come back to New Zealand, he says, but now they’re expecting another child, and the pandemic has made the prospect of passing through airports seem too risky. He’s had a nervous time of it in the US, where he says states like Florida have been too quick to reopen, and is pinning his hopes on a vaccine coming out soon.

As New Zealand citizens, Palino and his family would have little problem getting one of the limited spots through the borders to come back. “If we’re lucky and fortunate to get enough votes for the Tea Party, we’ll have to come back,” he says.

Palino says the international perspective of Tea Party candidates and members – many of whom are themselves migrants – was one of the reasons why he was drawn to the party. In particular he liked its policies on trade and manufacturing.

“I don’t think people are really thinking about this at the moment, but their policies around supply chains – when Covid hit, just like in New Zealand, in America we couldn’t get masks. That was one of the things they were worried about at hospitals – frontline people had to wear their masks for five days.”

Palino said there are many similar examples, including other types of PPE and electrical components, of goods that have become incredibly difficult to source because of global supply chain issues. He believes the Tea Party’s policies on trade and manufacturing would prevent such shortages from crippling New Zealand’s economy.

“Imagine parts that you have to order from overseas that run power to a city or something like that. We have to look at our future supply chain, and I believe to make New Zealand self-sufficient, we really need to bring manufacturing back.

“God forbid something happening in the world one day, where if it’s a natural disaster or something like that, and all of a sudden you can’t get your supplies out of a certain area. We actually have to think about that.”

Palino is a believer in the power of ideas to cross cultures, and that what he has seen around Florida could be applied to New Zealand, and vice versa. On housing, “in Florida, we have an enormous amount of gated communities, and beautiful gardens, and different ways of doing things.

“When I first moved to New Zealand 25 years ago, I brought things to New Zealand. And as I was there, I looked at things and thought wow – I could bring these back to America. There’s different ideas for different areas. Look at how many Kiwis go overseas and come back and open up big businesses.”

Even with that international perspective, Palino acknowledges it’s going to be challenging to campaign from the other side of the world. He’s more of a face to face campaigner, and says this is partly why he’s standing as a list-only candidate.

He also admits it will be hard for the wider Tea Party to make it into parliament, given how recently it formed. “It’s always very hard for a new party to build up their profile, but I think John [Hong] and Susanna [Kruger, co-leader] are doing a great job. I’m blown away by how many people are getting back to me and saying wow about them – the word is getting out there.”

Palino says Hong is also well known around Auckland for bringing a lot of international money and development into the city. Hong has also chaired the local arm of a promotion committee for the Chinese government’s Belt and Road initiative, a project which aims to build both diplomatic soft power and trade links through the construction of infrastructure.

So will Palino be heading back to New Zealand any time soon? If the Tea Party doesn’t get elected, he plans to return next year, after he and his wife’s second child is born. And if the party does get the votes, he’ll be on the next flight home.