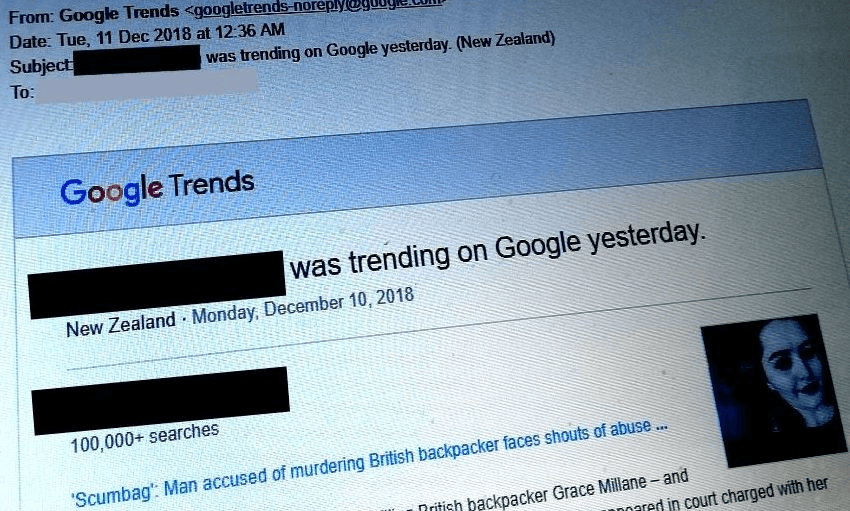 Who is the man accused of killing Grace Millane? Google told recipients of its email in the subject header.

Who is the man accused of killing Grace Millane? Google told recipients of its email in the subject header.

In a ferocious opinion piece for the Spinoff, the minister of justice says he would be ‘failing in my duty’ if he were to allow the internet giant to ‘ride roughshod’ over New Zealand law.

The New Zealand minister of justice has promised that there will be consequences for Google after the US-based company informed him that it was planning to do nothing to change systems which late last year allowed a flagrant breach of a court-ordered name suppression in the case of the murdered British backpacker Grace Millane.

“Google’s attitude to fair trial rights in New Zealand should concern us all,” he writes in the Spinoff. “It’s time to call out their recklessness.”

Little contests the idea that the scale of Google’s operations and its reliance on automated algorithms should not be an excuse for inaction. “Frankly, their size, far from meaning they can’t fix an obvious risk to justice systems, means they are big enough to do better.”

He continues: “I would be failing in my duty if, as a minister of justice in a small country, I threw in the towel and decided nothing could be done in the face of a giant international corporation thinking it could ride roughshod over one of the most important principles of criminal justice.”

Last year the Spinoff revealed that Google had sent the name of the accused, in breach of a court order, directly to everyone subscribed to its “New Zealand trends” email newsletter. The name was obvious even without opening the email, appearing in the subject header.

In the days before Christmas, Little hosted two Google representatives at his parliamentary office, with another Google staffer joining via video link from their California base. At the time, Little called it a “constructive meeting”.

He told the Spinoff then: “The upshot was they’ve agreed to consider what action they can take … I’ve suggested any automated email concerning a court case and generated on the basis of the volume of queries could have a delay built into it until a manual check is made of any court orders relating to it.”

Google had agreed to engage with officials “to see what else could be done”, he said.

Almost eight months later, Google has informed Little that there are no plans to do anything to address the issue, he says.

The New Zealand government is considering a range of options in response, says Little, including legal recourse, on which it has sought advice.

He has also asked the Ministry of Justice to “review how it notifies media about suppression orders as part of its work to implement the new contempt laws”.

Little concludes his op-ed by insisting that he will not let the issue lie.

“One thing is clear. I’m not prepared to let Google off the hook, and all options are on the table.”

Jacinda Ardern this morning said that both she and Little had directly raised directly with Google their concerns over the name suppression breach.

“These are our domestic laws, and we do have an expectation they will be upheld,” said the prime minister.

“So the response has been disappointing. Now we need to consider what the next steps will be.”

Approached for comment, Google provided the Spinoff with the following statement: “Google respects New Zealand law and understands the sensitivity around this issue. When we receive valid court orders, including suppression orders, we review and respond appropriately.”

The name of the man charged with Grace Millane’s murder remains suppressed.