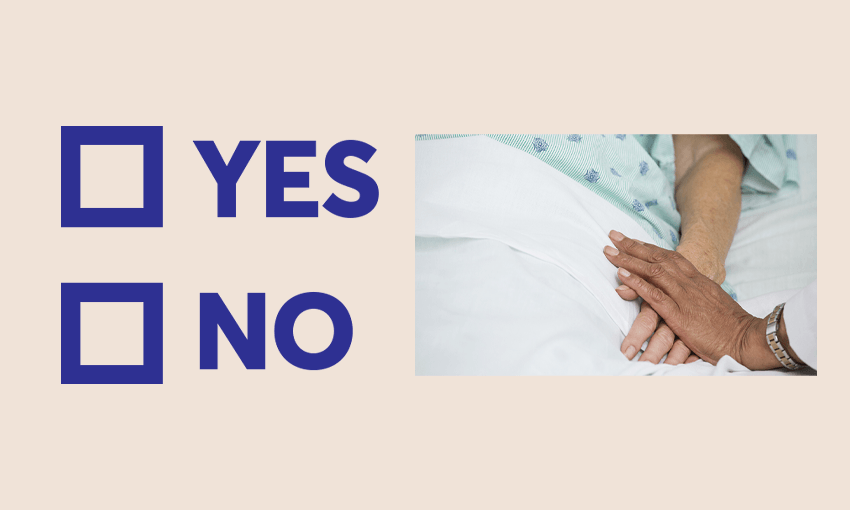 Everything you need to know about the 2020 assisted dying referendum

Alongside the general election of 2020, New Zealanders will be asked to vote on the End of Life Choice bill, which allows voluntary euthanasia for those suffering terminal illnesses. Here’s our bumper question-and-answer special on what it involves.

Click here for everything you need to know about the cannabis referendum. Read more from the Spinoff on Election 2020 here.

The election date has changed. Will the referendum date change as well?

Yes, the referendum will now take place on October 17.

What is the exact question we’ll be voting on?

“Do you support the End of Life Choice Act 2019 coming into force?”

That’s it. To be a worthwhile gauge of public opinion, referendum questions have to be worded as neutrally as possible. So the question itself is a simple yes or no about a specific piece of legislation. You can read the full legislation here.

Who got the legislation through parliament?

The End of Life Choice bill was largely driven by Act MP David Seymour, who has advocated for this law since the 2014-17 term of parliament.

Why is the public voting on it, if the legislation already exists?

Over the last term of parliament, MPs in select committees and the full chamber of parliament worked on this bill, and eventually got it to a point where a majority were comfortable with it passing – providing it also went to a referendum. This clause was brought in as a Supplementary Order Paper by NZ First MP Jenny Marcroft, in exchange for her party’s support for it to proceed. Without that, it may have failed to pass through parliament.

In general terms, MPs did not vote for or against the End of Life Choice Act along party lines. Instead, it was treated as a conscience issue – in other words, MPs had to decide for themselves whether they supported or opposed it. At the third and final reading of the bill, the margin in favour was 69-51.

If the referendum passes, will anyone be allowed to choose assisted dying?

No. Under the legislation, there are strict conditions – all of which must be met. They are:

What exactly is assisted dying?

This is defined as a medical professional giving medication that will relieve suffering by bringing on death. A person’s doctor and an independent doctor must agree that the person meets all the criteria, which includes being able to make an informed decision about assisted dying. If either doctor is unsure of the person’s ability to make that decision, a psychiatrist needs to assess the person. If a person is not eligible, they cannot receive assisted dying.

If a person is deemed eligible, then a date and time is set for the person to be given their fatal dose of medication. They can change their mind at any time of this process.

How would the medication be administered?

There are four options:

Can a decision on assisted dying be made on behalf of someone else?

Under the legislation, no. You could not, for example, make a choice for assisted dying on behalf of a grandparent with severely advanced dementia. A medical professional must also step in and stop the process if they feel someone is pressuring a person to choose assisted dying.

What about a family member denying permission for someone to choose assisted dying?

Again, no. A person does not have to discuss their choice with their family, one way or the other. It can only be the person’s choice alone.

Say severe dementia runs in a person’s family. Can I write a will or other legal document that would allow me to make a decision in advance to choose assisted dying, if I cognitively decline to a pre-agreed level?

No, the decision must be made at the time, by a person of sound mind and judgement. If a person had experienced such cognitive decline that they were no longer able to make this judgement, then there would be no way to be sure that what they declared in advance was still their choice.

Could a doctor suggest to someone that they consider assisted dying?

No, as that would contravene the choice being freely made.

If I chose assisted dying, would that forfeit my life insurance policy?

Can we be absolutely sure that nobody would ever choose assisted dying because of pressure from another person?

While there are safeguards in place with the legislation, this is one of the main arguments raised by opponents of the law change. The concerns have been raised by advocates of the elderly, and people with disabilities, on the grounds that at present, some view these people as a “burden” – either explicitly or implicitly. For example, disability rights commissioner Paula Tesoriero last year said that those in the sector were “overwhelmingly opposed” to the legislation, because some patients may feel coerced by their families.

Former prime minister Bill English is another opponent of the law change who has raised this point. He wrote an op-ed on Stuff saying that even supporters of assisted dying generally should be wary of this particular legislation, because the protections were insufficient. “Talk to any doctor and they will tell you it is virtually impossible to detect subtle emotional coercion, and even overt coercion, at the best of times. Yet many people will be ‘signed off’ by medical practitioners with little or no understanding of the patient’s family or social history, let alone medical history,” he wrote.

Is there also religious opposition to the law change?

Some faiths are heavily opposed to assisted dying. An open letter to MPs was signed by leaders of Catholic, Baptist, Presbyterian, Anglican and Lutheran churches, the Federation of Islamic Associations and the Salvation Army.

What about tikanga Māori?

As with pretty much every other issue under the sun, there is no singular view within te ao Māori on assisted dying. Radio NZ’s Meriana Johnsen had an excellent piece last year which explored the complexities and different opinions on the matter.

What are the arguments in favour of the law change?

The primary argument in favour of this law change centres around compassion for the dying. David Seymour set out his reasoning on the website LifeChoice, saying it was about giving people the freedom to choose to end their own lives with dignity, saying it was both legally and morally the right thing to do.

“The motivation for this bill is the very real anguish faced by people with terminal illness, as they anticipate the prospect of intolerable suffering, and the indignity of the final few days and weeks of their lives. While pain can be ameliorated somewhat, the suffering and indignity of that final period of life remains a profound concern to many people.”

Additionally, he argued that total prohibitions on assisted dying left terminally ill people facing much worse choices than that offered by his proposed law change. “A person facing this prospect has two options: she can take her own life prematurely, often by violent or dangerous means, or she can suffer until she dies from natural causes. The choice is cruel.”

Is the medical community in favour of this law change?

Many medical professionals are not in favour. More than 1000 doctors signed an open letter against the law change, saying that assisted dying was unethical. While they supported the right of terminally ill people to refuse treatment if they so chose, “crossing the line to assist a person to die would weaken the doctor-patient relationship.” Subsequent polling carried out by Horizon research and published in an Act Party press release found that 37% of doctors were in favour of a law change, while 52% were against, with the remainder unsure.

Of those doctors who are against assisted dying, can they object to providing it as a service?

No health practitioner would have to carry out a request for assisted dying if they had a conscientious objection towards it. However, if a patient requests assisted dying from a doctor, they must both inform the patient of their conscientious objection, and also inform the patient that they have the right to ask for the name and contact details of a replacement doctor.

What about polling of the general public? After all, it is a referendum.

Currently, pretty much all polls show a majority of the public is in favour of changing the law to make assisted dying legal. The numbers vary from poll to poll, but the general outline is the same. On the most recent survey carried out by Research NZ in July, 64% of respondents were in favour, with 18% not in favour. The remaining voters were undecided.

If I’m voting in the general election, do I have to also vote in this referendum?

No, voters can also choose to abstain from voting on this question.

Click here for everything you need to know about the cannabis referendum. Read more from the Spinoff on Election 2020 here.