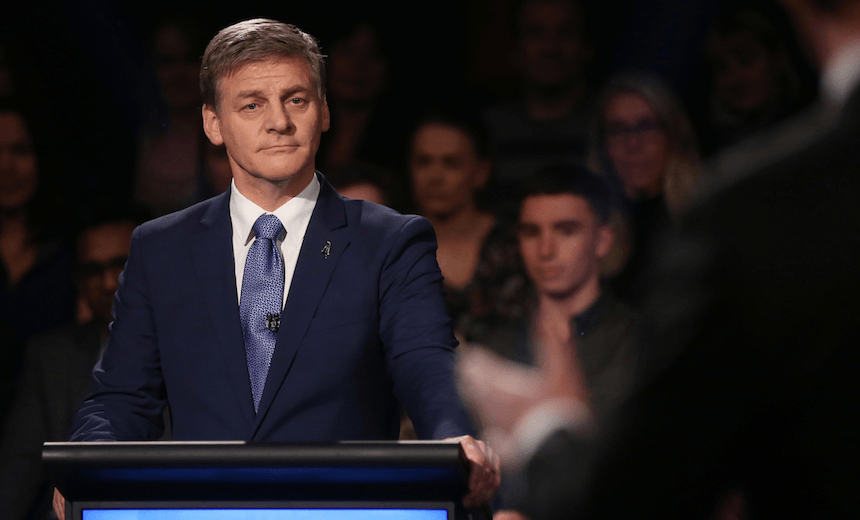 Surprise! National can measure child poverty after all. Now comes the hard part

By Max Rashbrooke
Guest writer
Made possible by

Prime Minister Bill English made an unexpected commitment last night to cut the number of kids living in poverty by 50,000 over the next three years, and another 50,000 in the three years following. What exactly does he mean by that, asks Max Rashbrooke – and could his plan ever even work?

When Bill English announced in last night’s debate that National would lift 100,000 children out of poverty if re-elected, you could forgive Jacinda Ardern for feeling a little flummoxed. Ardern and Labour have spent nine years urging the government to tackle poverty, only to be told there’s no point in even having a measure for it. Now, not only does National seem to have a measure, it also has a target.

This was policy-making on the hoof, it appears. There were no accompanying press releases from other ministers, nothing to prepare the ground, and crucially no detail – even the following day – about how it would be done. This is, as Newshub’s Lloyd Burr argued, a big problem for a party that has spent weeks attacking a claimed lack of detail in Labour’s policies. One has to hope that a media that rightly dug deep into Labour’s water tax will go just as hard here.

If we take a step back, though, we can see what an amazing moment this is. New Zealand now has all its major parties committed to a massive reduction in child poverty. It is a tribute to the activism of campaigners, the research and writing of experts, and the power of evidence to change people’s minds over the long run. It has taken perhaps 20 years, far longer than it should have, to get to this point.

The key question, though, is whether the commitment is real. The answer starts with National’s pre-existing claim that the 2017 Budget would, by reducing taxes for low-income workers and boosting some child support payments, lift 50,000 children out of poverty. In this context, being poor means having less than half the income of the typical family (adjusted for household size). Under this measure there are 150,000 or so children in poor families; National’s claim is that the Budget’s family incomes package will help one-third of those families over the line, and that they would if re-elected find policies to help the next third down.

This measure is one of the less demanding poverty lines, which vary because there is – alas – no perfect way to measure the issue. In contrast Ardern last night cited (implicitly) the line that says families are poor if they have less than 60% of the typical income and their increased housing costs are taken into account. These subtle changes make a big difference: as she said last night, on that measure 295,000 children are in poverty.

That doesn’t mean that poverty is hopelessly complicated or that one can do nothing about it because no-one agrees on the measures; it just means there are different depths of poverty, and that English is targeting some of the poorer people in Ardern’s wider group.

English’s choice is significant because, even if his government wouldn’t formally set a poverty line, he is now implicitly endorsing one. It’s also philosophically interesting because he’s chosen an inherently relative measure, one that deems people to be poor based on how much they have compared to others. It implies that poverty is not just about lacking a roof over your head or a decent pair of shoes, but is also about the shame and deprivation of not having what others have deemed is a minimally acceptable way of life. The great economist Adam Smith recognised this back in 1776, when he wrote in The Wealth of Nations that being in poverty is to lack “not only the commodities which are indispensably necessary for the support of life, but what ever the customs of the country renders it indecent for creditable people … to be without”.

This approach, though clearly correct, is resisted by some commentators because it situates poverty in the wider income distribution and thus in the raging debate about inequality. So it is telling, and welcome, that English has accepted that this is a key measure.

Whether he could achieve what he claims is another question, though. As I argued last month, the government was rather shy about its Budget claim, probably because it could only measure what happened to people’s income before they had to pay their housing costs. Ordinarily that’s a reasonable approach, but not with the housing crisis we currently face, and the problem for National is that although their changes will give poor people more money, much of that may simply be swallowed up by landlords. With competition for rentals so high, it’s very easy for landlords to inflate prices. So the assumptions behind the claimed cut in poverty were, as the Treasury admitted, “highly contentious”.

That means there are doubts about whether even the Budget measures will work, unless someone properly tackles the housing crisis. For the same reasons English also needs to be pressed to use an after-housing-costs measure.

Then there are doubts about how National would afford the next set of measures – which apparently would come through another family incomes package. The first package was based on taking families from just under the poverty line to just over it. The next tranche are much poorer, so it’ll cost much more to lift them over – and there is no evidence of how National would afford that. Mind you, that also creates problems for Ardern, who, having also committed herself to the target, must likewise show where she would find the money.

One also has to be sceptical about the idea progress can happen quickly. When Tony Blair famously made child poverty a defining issue for the British Labour Party, he thought it would take a decade to halve it and 20 years to end it. In the end even this proved too ambitious – Labour made only moderate progress before being turfed out in 2010 – and it is hard to see why it would be different in New Zealand.

There is, finally, a wider picture. Just taking families over an income line doesn’t wipe away all the stresses in their lives. It doesn’t excuse the humiliation that WINZ routinely inflicts on them, or deal with the clawbacks that can see them lose 80 cents of every extra dollar earned. But given that inequality researchers like myself have spent years urging the government to make progress on poverty measures, it would seem churlish to pivot straight to these concerns. Those issues can be raised later. For now, there is enough work to be done asking whether our political parties can deliver on what is remarkably close to a new nationwide accord on one of the issues of our time.