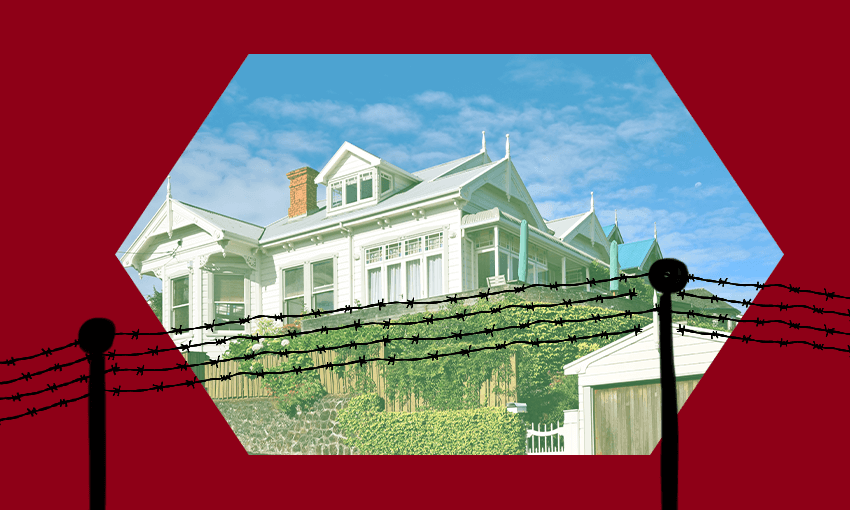 Councillors have voted to protect most of Auckland’s villa suburbs, in an audacious, questionably legal act of legislative defiance. Hayden Donnell writes on the council quest to stop housing where it’s needed most.

The political speeches hadn’t officially begun at Auckland Council’s planning meeting on Thursday and Wayne Walker was already agitated. In what was meant to be a stale question and answer session with council staff, the Albany councillor got into a heated argument with committee chair Chris Darby. He sparred with council planning chief Megan Tyler. Walker was angry about climate change. Councillors were debating their response to new government legislation aimed at enabling more housing, and he was dismayed at the fact their proposal would force extra development to the edges of town, where residents were more likely to be dependent on cars. “This proposal sinks any significant reduction in emissions that we might make over time because it encourages development around the periphery,” he huffed.

If Walker wants to take a look at one of the people responsible for torpedoing the potential climate benefits of the housing legislation in question, small handheld mirrors are available at The Warehouse for just $6. At that cost, he could probably afford to buy one for himself, the majority of his colleagues, and some of the top bureaucrats in charge of the council’s planning department. They could all use them to look the climate saboteurs straight in the eye.

The government’s National Policy Statement on Urban Design (NPS-UD) is aimed primarily at enabling housing in climate-friendly areas. It orders councils to allow buildings six storeys or higher within walking distance of train stations and dedicated busways. A supplementary piece of legislation passed last year, the Resource Management (Enabling Housing Supply and Other Matters) Bill, permits people to build three townhouses by right on most sections in residential areas. Though that bill would allow some housing in outlying suburbs, the most meaningful curbs on development in Tāmaki Makaurau are in inner suburbs like Herne Bay and Mt Eden, where construction is restricted to one house per section under special character rules.

At every step, councillors have fought tooth and nail to water down, subvert and sabotage the progressive aims of these bits of legislation. They decided last year to define “walking distance” as 800m when it came to the areas they were required to upzone around rapid transit outside the city centre, despite council’s own research showing commuters routinely walk further than that to catch a train, and many past council documents defining 1.5km as the “walking catchment” for public transport.

Around some train stations, councillors simply haven’t allowed extra development to happen at all. In a long, 2.8km-wide stretch of land along the proposed route of Labour’s light rail line, they have decided not to comply with the government-ordered upzoning. The excluded area includes much of Kingsland, which is set to become the most connected suburb in the country, home to both light rail and a major hub of the City Rail Link. In council on Thursday, Tyler said that corridor was cut out because it could soon get an “exciting” and “significantly different” land use to what it would have been assigned under the NPS-UD. She promised those changes within “months, not years”. In the meantime, the council is refusing to allow apartments in several areas near rapid transit because there might be even more rapid transit in those areas in future.

Even these are just sideshows to the council’s most egregious bit of climate vandalism: its desperate, clutching defence of special character areas. Protections on so-called character houses restrict dense development on 41% of the residential land within 5km of the city centre under the council’s Unitary Plan. The restrictions are most draconian in the places where development makes most sense, covering 94% of land in Grey Lynn Central, 91% in the city-adjacent suburb of Ponsonby East, and 80% in central Mt Eden and near Eden Park. Not only are these areas within walking distance of jobs; they’re the best connected to public transit.

Character restrictions are often defended on “heritage” grounds. But heritage is enshrined in legislation and protected under the NPS-UD, while special character is a made-up council category with an amorphous definition, designed to protect houses that don’t qualify for heritage status. The villas that populate Auckland’s inner suburbs are mostly heavily renovated. Some are just facades standing in front of completely new houses. At this week’s meeting, pro-housing Waitakere councillor Shane Henderson took aim at the misunderstanding. “If I had a dollar for every time someone conflated special character and heritage, I’d be very rich indeed. Maybe, just maybe, I could be able to afford to buy a home in a special character area myself,” he said.

Despite that, Walker and his like-minded Albany colleague John Watson have fronted a series of “save heritage” meetings across the city in recent months to warn audiences their history is under assault. In a council meeting in June, Walker said the planks that villas are made out of must be defended, even if the houses themselves are unaffordable to the working class Pasifika people that once occupied them. “The kauri, the rimu, the matai, the tawa. So many timbers, and effectively trees, that are that taonga, the treasures of Auckland,” he said. On Thursday, these opponents of housing close to jobs and public transport complained bitterly that the council was allowing housing far away from jobs and public transport. The only logical conclusion was that they didn’t want housing anywhere at all.

Even if they still weren’t happy, they mostly got their way. The council pressed ahead with a plan to retain the majority of Auckland’s 21,000 special character houses, even adding restrictions to a net 400 houses. When asked why more houses had received protections, despite only 30% of the public submitting in favour of that move, council heritage manager Noel Reardon explained that doing what the majority of people wanted wasn’t an overriding concern. The type of submission seemed to matter more. “We received feedback from a number of heritage and ratepayers groups,” he said. “The volume is irrelevant in terms of considering feedback.”

As he has throughout this process, Henderson used his speaking time to criticise his colleagues’ hypocrisy and servitude to monied interests. He pointed to new council calculations showing their quest to enshrine what amounts to fake heritage would come at the cost of rising emissions. Tyler questioned whether the figures were new, but said councillors should have known all along that they were prioritising character over climate action. “Retention of special character within really accessible areas can have some negative impact,” she said. Henderson was exasperated at the gap between his colleagues’ rhetoric on climate and their actions. “Why is this body ignoring the climate emergency that we all signed up for? Why?” he asked.

His question fell on deaf ears. In the end the vote was 14 for the council’s proposal, with seven abstentions, and only Henderson voting against retaining low density character areas. It was a victory for our councillors in their gritty, drawn-out campaign against a better world. But the losses could be about to pile up. Today’s decision is set to go out to commissioners for assessment. They will be picked by a government which has repeatedly accused Auckland Council of breaching the NPS-UD in its attempt to retain suburb-spanning character protections.

As the day ended, councillor after councillor lined up to thank staff for their tireless work. In the last few months, they’ve individually assessed thousands of character houses, in an exhaustive, councillor-backed effort to preserve as many of the richest parts of town in amber as possible. It’s a genuinely impressive effort, but it’s hard not to imagine what could have been achieved if they’d used the same time to plan for a vibrant future city based around dense, mixed-use development and public transport links. Instead, there’s a high chance all that painstaking work is about to be thrown straight into the bin. If that happens, they’ll have their bosses to thank.