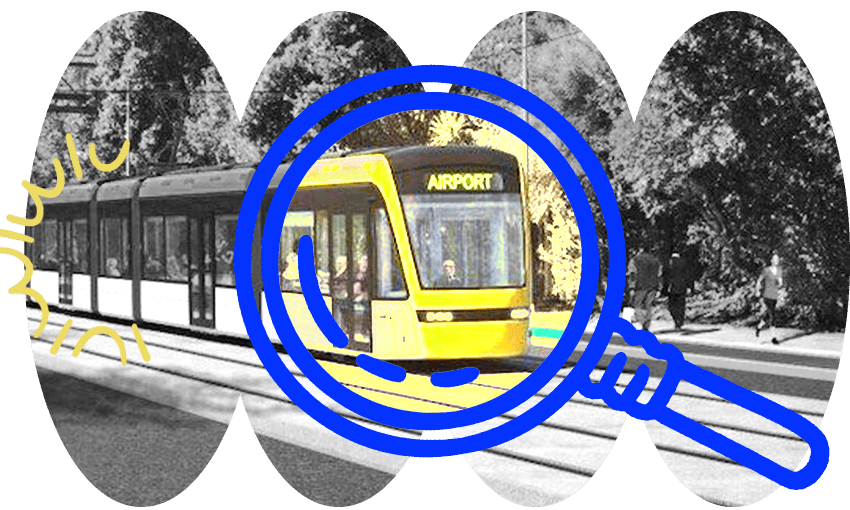 ‘The worst of both worlds’: A closer look at Auckland’s light rail plan

Public transport advocate Matt Lowrie explains why he’s disappointed by the announcement of the long-awaited light rail connection between the city centre and the airport.

The government last Friday pressed on with plans to future-proof Auckland’s public transport network, announcing a partially underground route from the CBD to the airport.

It’s the latest stage of a politically divisive and often halting process. But should the project proceed, tunnelled light rail from Wynyard Quarter to Mount Roskill will emerge to the surface by the early 2030s, running alongside State Highway 20, passing through Onehunga and Māngere before terminating at Auckland Airport. Stretching 24km, with up to 18 stations, and services running every five minutes, the option is the second-most expensive behind light metro, a rail-based mode that is grade-separated, meaning it runs either above motorways or in tunnels beneath densely populated areas. Tunnelled light rail has a likely price tag of around $15 billion once adjusted for inflation. There’s potential the cost could balloon to $24b.

“We have deliberately chosen this option for Auckland Light Rail that will integrate with other major infrastructure projects across Auckland, like the additional Waitematā Harbour crossing, the Auckland Rapid Transit Plan and Kāinga Ora Large Scale Projects,” said finance minister Grant Robertson last Friday. Transport minister Michael Wood added Auckland needed a “linked-up” public transport network that connected communities, made it easier for people to move through the city and reduced congestion.

The fact the government is willing to spend tens of billions of dollars on Auckland’s public transport is fantastic, wrote Matt Lowrie, the editor of the Auckland transport and urban design blog Greater Auckland, in a post titled “Sooo…Tunnelled Light Rail”. “So, it’s odd then to feel somewhat disappointed by it all.”

I spoke with Lowrie about his reaction to the announcement and why two good lines may be better than one great line.

You were disappointed by the decision because tunnelled light rail is the “worst of both worlds”, as you wrote in your blog post. What do you mean by that?

If you’re going to build something, you either go for the cheaper option and use the money you save to build a bunch of other things or you go for the more expensive option and do it properly. This is really the first of three lines meant to be built – the others extend to the North Shore and to the north-west. Previous modelling has indicated the North Shore is about twice the demand of these two other routes combined and the north-west will likely be busier as well. So you’ve got a situation where we’re putting all this effort into this first route but we’ve also got these other routes to build… we’re potentially causing issues further down the track because there’s a lot of decisions that will need to be made and the compromises that come with them.

How likely is it that we end up in a never-ending cycle of proposals and inaction – or is it too risky for the government to not get shovels in the ground?

It’s risky both ways. The biggest current transport project by far that New Zealand has ever built is the City Rail Link and that’s costing less than $5b – and that’s still very expensive. So we’re talking about a project that’s at least three times the size, possibly more. This is something unprecedented for New Zealand to build. The risks are very high to deliver it. What gets urbanists and transport advocates nervous is that we’ve seen this exact thing happen recently with the harbour crossing for bikes and pedestrians where, all of a sudden, the bridge doubled in cost. It was still less than a lot of other transport projects, but the government came under pressure from the media and cancelled it. Also, the opportunity costs for other things the government wants to spend money on, it will undoubtedly come under pressure from the opposition and other political parties to can the project. Does the government have the fortitude to continue on and deliver it under a lot of opposition? So far, the evidence points to “no”.

Kingsland is set to become the best-connected suburb in Auckland and you raised the question of whether it needs so much extra capacity. Besides rugby games and concerts at Eden Park, why do you think the suburb needs another public transport route servicing it?

It doesn’t. The capacity of the City Rail Link will increase substantially. Currently, there’ll be a train every 10 minutes, which can hold about 750 people, so you can move a couple of thousand people an hour with the City Rail Link. And with other plans for the rail network, that could rise to a train holding about 1,200 people every five minutes. Plus there are buses on New North Rd and Sandringham Rd so there’s a huge amount of capacity there already – and a lot more coming. The reason why Kingsland is on the list is simply that’s how the government gets to Sandringham Rd and Sandringham Rd is where it wants to be for the Kāinga Ora development.

It’s really a location of convenience then.

Yeah, in some ways. The wider issue for me is that all the solutions are expensive but this is a very expensive solution for what it is. So what else can we spend that money on? We have problems with our transport planning processes, which don’t allow for much out-of-the-box thinking. We’re rigid in what solutions we look at – all of them are routes running from the city centre to the airport. What we don’t look at are the alternatives.

For example, one of the things we’ve proposed is surface light rail on Dominion Rd. And because you’ve got parts of the route planned along State Highway 20, it’s not that much more to extend a separate route to the western line and connect up the network, which makes it easier for people going from west to Onehunga or to the airport. Instead of having one line that zig-zags all over the city, you have a couple of different lines, which serve a wider range of people and corridors… By comparison, for the cost per kilometre of surface rail and the difference in building a tunnelled option, we could build another 15km of surface light rail somewhere else. Do we build Dominion Rd or Sandringham Rd? Well, we could build both – and it’ll still be cheaper to build and run than what’s proposed.

Building two good lines is better than one great line.

This interview was edited for clarity and brevity