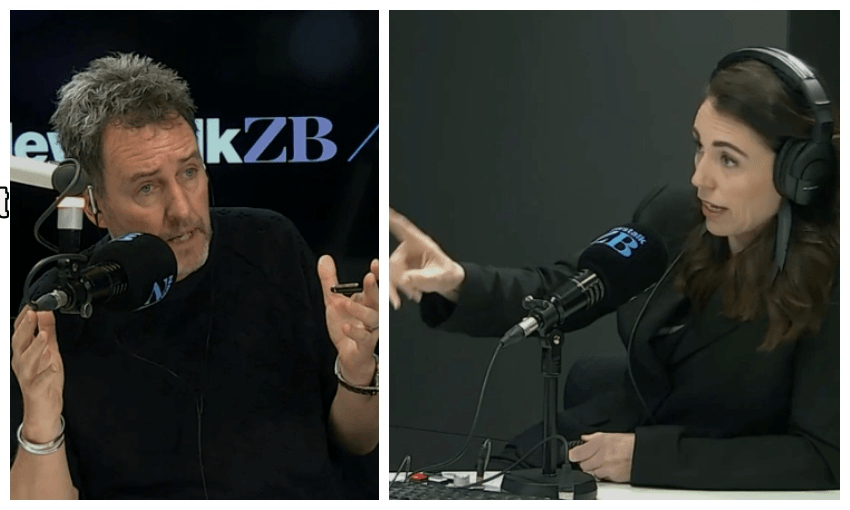 The prime minister conducted most of her Tuesday morning media interviews in-studio today, including her regular chat with ZB titan Mike Hosking. Madeleine Chapman watched then wrote this.

Every Tuesday morning Jacinda Ardern has the pleasure of speaking to Mike Hosking. A weekly interview slot on ZB, among others, has long been held by the prime minister of the day. It’s one of the privileges that comes with the office.

The conversations are a lot of things. What they rarely seem to be is enjoyed by the participants. It is, after all, the fourth estate’s responsibility to hold power to account. It also appears to be Mike Hosking’s personal mission to antagonise everyone he interacts with. But what eases the near palpable tension most Tuesdays is the fact that the interviews tend to be conducted by phone. A dramatic sigh or long pause is great, but there’s a distance to it, a safety. Phone calls can get tense, sure, but knowing that if worst comes to absolute worst, one of them could just hang up means the stakes have a ceiling.

This morning, the stars aligned and Ardern smashed through that ceiling by speaking to Hosking face to face.

So what happens when two people who disagree on everything are forced to spend time in each other’s company outside the timeless classic When Harry Met Sally?

“So meth has never been cheaper in this country.” Hosking bursts out of the blocks into … nothing? He’s clearly looking at someone, or something, but he looks very much alone. I don’t trust any interview without a two shot. He could be speaking to a wall for all we know.

Still no proof they’re even in the same room. Look at all that empty space. The presence of the Ardern Point so soon into the discussion does, however, suggest the prime minister is in the presence of a middle-aged white male broadcaster. For two people who love to wear a splash of colour, they’ve coordinated well for this event: their joint funeral.

Radio interviews are audio first and visual second but still a disappointingly safe choice from Ardern in the headwear department. The presence of a Newstalk ZB microphone does nothing to allay my suspicions that this interview is being conducted at separate locations. Give. Me. A. Wide. Shot.

Two people have never sat further apart. Mr and Mrs Smith sat closer than this and they were literally planning each other’s death. Ardern is closer to Simon Bridges across the House during Question Time than she is to Hosking in this moment. Are those papers Ardern’s? The bag, I assume, is hers, which means if the papers aren’t, she pulled a classic power move by throwing her shit on Hosking’s desk a la Miranda Priestley.

I cannot get over this. Logically I know that this is probably how modern radio studios are set up, but compared to the AM Show (sitting directly opposite Duncan Garner) and Breakfast (practically sharing a seat with John Campbell), this looks like they’re yelling across the Bermuda Triangle. But it’s still not enough space for Ardern, who literally leans away while calling Hosking “ridiculous” for saying the government was “pro drugs”.

Hosking is very confident in this drug debate for someone who rambled incoherently about the topic just days ago, suggesting the government would go too far and provide clean needles for drug users. Green MP Chlöe Swarbrick responded on Twitter at the time: “We were the first country to roll out needle exchange services in 1987. We now have some of the lowest HIV rates in the world.”

In berating Ardern and the Labour government for its stance advocating for drug testing at festivals, Hosking inexplicably voiced the line “you start soft, it ends up hard, and everybody knows that”. Right.

Remember the days of twirling a 15 metre phone cord? If their phone interviews were conducted via landline, this is what Ardern would look like throughout them.  Today’s was no different, with the two disagreeing and speaking over each other and then ending with a terse goodbye. Here’s a random snippet that encapsulates the Ardern-Hosking relationship.

Ardern: it is outrageous and I’m personally offended that you would suggest –

Hosking: don’t be personally offended by anything I say.

Ardern: I am most weeks, to be honest.

And here’s the moment the segment ended and the ad break began.