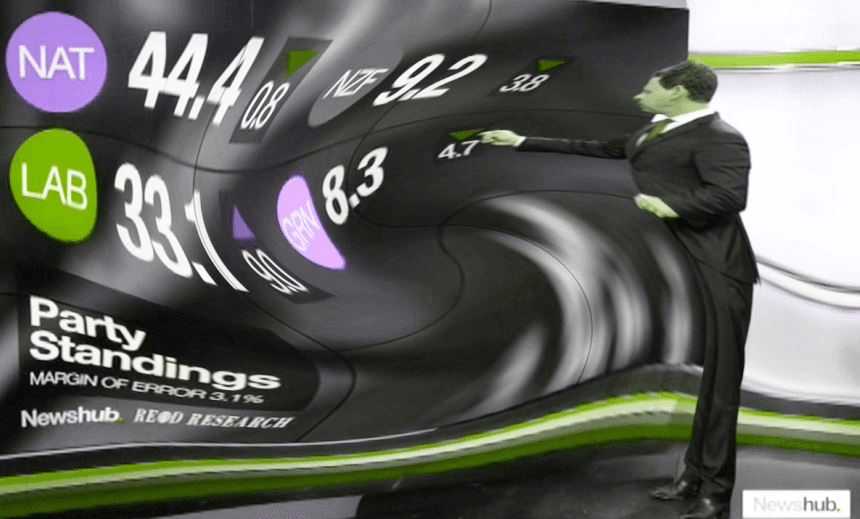 Pollwatch: Under Jacinda Ardern, Labour has powered back to the future in the new Newshub poll, as an embattled Green party slides. But are National impermeable? And should we be talking about a disaster for NZ First, too? Toby Manhire weighs it all up.

There is something distasteful about fighting over a political corpse.

Newshub was having none of that. Turei was gone, and “it has been a Newshub poll tonight which has forced her out”, was the introduction to Patrick Gower’s report. The poll, the first since New Zealand politics entered the mirror maze of the last 10 days, was awaited by some of us with an eagerness bordering on frenzy. It delivered a “catastrophic, disastrous result” for the Green Party, said Newshub’s political editor. For the Greens, “losing one third of their support in one week [is] an absolute political nightmare, and that is what has obviously forced Metiria Turei to go – she learned of the result just hours before she resigned”.

Boom time for the New Zealand scalp collection industry. While it’s unseemly at the best of times, there’s an added layer of unpleasantness when the scalp belongs to someone whose sins are, in the scheme of political scandals, kind of piffling. The chances are that they were both a bit right: that the poll numbers, combined with the tide of questions being asked by RNZ and others, broke Turei’s previous steadfastness. Her explanation: that the scrutiny on family had become unbearable. That “the reality of my life and people’s fallacies about my life are just becoming intermingled”. And that “the swirling story had begun to damage the kaupapa of the party”.

I don’t agree with those that say Turei should not have faced questions about the account she gave at the Greens’ AGM. It was right and defensible to investigate details around an episode she chose to publicise. She expected to face scrutiny. The decision to speak out about her own law-breaking was, as the Green leaders have said repeatedly, taken knowing it was seriously risky. They were foolish, as Turei has in effect conceded, not to proactively reimburse the public purse before going public.

But, in the context of reporting polling data, going all Bring Me the Head of Alfredo García is too much.

“If Metiria Turei hadn’t resigned just before we came to air,” said Gower, “we would be calling for her to go now, given that disastrous result.” Isn’t this the kind of thing that Gower – a brilliant journalist, I reckon – was reflecting on as deeply problematic after his return from covering the US election?

Anyway, anyway, anyway. Whether or not it triggered Turei’s exit, there is a heap to digest in tonight’s extraordinary Reid Research poll for Newshub, which was surveyed through the tumult of the six days up to yesterday. Everyone was expecting a Labour surge with the beatification of Jacinda Ardern after Andrew Little’s resignation (and what a contrast with Turei’s that was); the question was by how much and, critically, at whose expense?

A nine-point lift to 33% is unquestionably good news for Labour. They’ve dramatically closed the gap on National. Their problem is that it’s barely at National’s expense. English and co won’t like the direction of travel – while there is nothing remotely statistically significant about a fall of 0.8%, it is their third consecutive drop in Reid polling – but on the whole it shows just how stable their support is. Solid as a rock, you might even say.

Or to put it another way, the combined vote of Labour, the Greens and NZ First, remains essentially unchanged. That possible tripartite coalition has grown by a wholly inconsequential 0.5%. Whatever else that means, this is clear: Winston Peters and New Zealand First, despite having dropped 3.8% in this poll, are still sitting pretty as kingmaker.

That NZ First result, really, is the least predictable – certainly the least predicted – finding. The Greens have been hurt by continuing layers of confession and internal mayhem, that seems clear enough. They could yet drop further. But a good chunk, if not the majority, of their poll fall can surely be attributed to the fact a plausible and popular leader suddenly popped up in the red corner. Doesn’t this result, when you think about it, point to the Ardern Effect being a considerably more powerful force than the Turei Effect?

No such scandal in the NZ First Party, yet they’ve dropped by 3.8 points. That does mean they now rank as the third most popular party in the poll, but that’s nevertheless a disappointment: it’s not a lot less that the Greens’ 4.7 slide. Just where does the line for “catastrophic, disastrous result” lie?

There is, however, something of an old-school feel to the result, with National and Labour comfortably out in front. The preferred prime minister stakes, more than anything, deliver a bold vindication of the 11th-hour change in leader. And you can judge how important leadership is by the insistence from National’s top MPs that leadership is not that important.

As we all rubberneck at the political pile-ups, it’s fair to ask what about all the policy. On that score, the Spinoff has something super exciting to reveal next week. Hang on, voter. Help is on its way.

Gorge yourself on the Spinoff’s election coverage here.