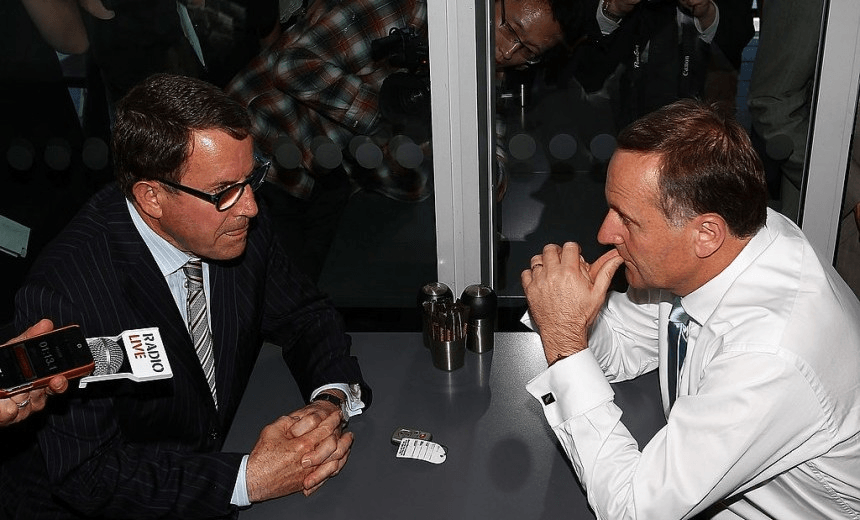 Election 2020: The case to make this the filthiest contest of all time

So-called dirty deals have been roundly denounced over the years. Hayden Donnell argues that they need to be normalised, and even embraced, in September’s election.

Just before the 2011 general election, Patrick Gower was confronted with a political act so stomach-churning, it forced him to abandon his trademark reserve. John Key was building up to the tea date where he would signal his intention to concede the Epsom seat to Act leader John Banks. Gower was sickened even before a cup was sipped. “John Key and Act’s dirty deal in Epsom is set to be the filthiest of them all. It disgusts me. BLOG:” he tweeted.

Gower may have hoped that would be the most turd-ridden deal in history. Instead every election since has brought in a fresh tide of fetid political wheeling and dealing. In his eyes, the record for the dirtiest deal of all time was eclipsed just six years after the 2011 Epsom filthathon, when the Green Party decided not to stand a candidate in the Ōhāriu electorate. “Labour and the Greens have just done the dirtiest electorate deal in New Zealand political history,” he said. When the Greens eventually reneged and stood a candidate, Gower exhaled. “I thank God for the Greens,” he wrote. “They have made New Zealand clean again.”

Nobody knows what deals the 2020 election will bring, but one thing’s for sure: this situation isn’t sustainable. Our electoral system can’t work properly if every political deal has to be judged not by the actual law, but by how they register on a dirt meter somewhere in the depths of the parliamentary press gallery. In this year’s general election, we need to normalise dirty deals.

It’s not like they’re against the rules. There’s no statute saying John Key can’t hand John Banks a cup of tea containing thousands of National votes. Though some commentators think trying to win elections is “political fraud”, parties are allowed to cede seats to potential allies polling under the 5% threshold, or avoid splitting the vote in potentially winnable seats.

The only disincentive for doing a dirty deal, besides its cost to party morale, is the possibility of being called a criminal on the 6pm news. That creates an uneven playing field, where those that care most about being seen as ethical voluntarily kneecap themselves at the start of the electoral cycle, while the proud political filth-mongers enjoy the forbidden fruit of their dirty deals.

It may be wiser to ignore the headlines. Nearly every dirty deal ever struck has been wildly successful. Peter Dunne was able to remain the MP for Ōhāriu through two elections thanks to the blessing of National Party, despite United Future regularly polling at 0%. Act hasn’t won more than 1.07% of the vote since 2011. It’s still in parliament preaching the wisdom of the free market that has so roundly rejected it, thanks to its triannual welfare package from National. But perhaps the most impactful dirty deal of them all was between Labour and NZ First during the 2015 by-election. Winston Peters won that campaign after Labour leader Andrew Little gave tacit approval for voters to back him over his party’s candidate, Willow-Jean Prime. Is there a chance that Labour’s backing, along with National’s opposition, influenced his decision on who to side with following the 2017 election? Did a dirty deal usher in the reign of Jacinda Ardern?

Whether that’s true or not, all the available evidence suggests a plurality of voters accept elections may involve both strategy and trying to win. There’s little sense in some politicians signing up to an arbitrary set of limitations, particularly if their opponents don’t do the same. Neale Jones, who was involved in dirty deals in Ōhāriu and Northland as Labour’s political director and chief of staff, says while he’d prefer no-one gamed the system like National and Act in Epsom, “I think as long as … one side does it (in this case National and ACT) then the left would be mad not to if the situation arose.”

Jones says the current rules governing dirty deals produce some undemocratic results. He points to the 2008 election, where Act got into parliament after winning Epsom, while NZ First missed out with 4% of the vote. That situation could repeat this year, with the Green Party polling close to the 5% threshold, and unlikely to win an electorate seat, despite having several strong contenders.

If we want to do away with those downsides, there are better ways than to demand hodgepodge adherence to an unwritten code of conduct. Our politicians could revisit the Electoral Commission’s 2012 review of MMP, which recommended lowering the threshold for entering parliament to 4% and eliminating “coat-tailing”, where parties like Act can get multiple MPs into parliament with just over 1% of the vote, provided they win an electorate like Epsom. Both of those moves would disincentivise dirty deals, though they have their share of detractors.

Perhaps the most effective reform would be to change elections in local electorates to single transferable voting, or STV.  The current first past the post (FPP) system delivers a win to the candidate with the largest voting bloc. That may sound democratic, but it means National MPs often win electorates despite having less support than the combined vote for Labour and the Green Party candidates. The Greens’ decision to pull out of the race in Ōhāriu in 2017 was an attempt to prevent that vote-splitting and allow Labour to finally eliminate Peter Dunne.

The primary criticism of STV is that it’s confusing and “for nerds”. The counter-argument to that is that it would create actually fair elections. Otago University politics professor Janine Hayward says STV takes away the impetus for dirty deals like Ōhāriu by allowing voters to rank candidates in order of preference, with the vote transferring down their list if their top contender is eliminated. FPP incentivises dirty deals, she says. “STV would remove the incentive.”

None of these reforms are going to be enacted before September’s general election. If we want to bring them about faster, we need to see the current system operating at its full potential, without any artificial limits imposed by weird outsider morality. This election, it’s time for a stress test of MMP. Maybe Labour should let Chlöe Swarbrick have a real shot at Auckland Central and help ensure the Greens’ survival. Or Northland to Shane Jones. National could give Epsom and Whangarei to David Seymour. Maybe we’ll come out of this disgusted at ourselves and determined to make a change. But to make that step into the future, first we have to fully embrace our present.

Let’s make 2020 the filthiest election of all time.