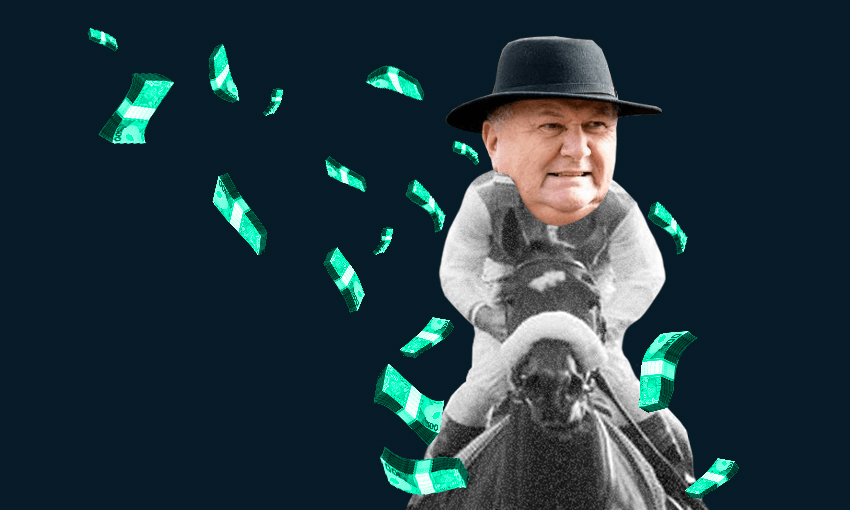 The Provincial Growth Fund is meant to fund… growth… in the provinces. So why is it building a huge new racetrack in one of New Zealand’s biggest cities? Because the racing industry seems to get whatever it wants, argues Duncan Greive.

Yesterday morning saw a blazing RNZ report that the Provincial Growth Fund has allocated $10.5m for the creation of an all-weather racecourse at Riccarton. This is humdrum in a way, because we’re long-numb to tawdry or questionable application of funding from the PGF and New Zealand First’s proud championing of the racing industry, an industry that has by coincidence donated tens of thousands of dollars to the New Zealand First Foundation over the past few years.

But even by NZ First and PGF standards, this was a particularly eye-watering example.

The PGF had previously declined to fund the racecourse, chiefly because of its location. Riccarton is not in some poverty-stricken province in dire need of investment, but instead in the middle of Christchurch, New Zealand’s second (or third, depending who you’re talking to) biggest city. Officials assessing the bid, which was initially turned down in 2018, noted that it was quite a strange place to be spending PGF money.

“The proposed Riccarton Park synthetic racing track is located in Christchurch City, which is ineligible for PGF funding,” assessors from the Provincial Development Unit wrote, according to documents obtained by RNZ.

All that somehow still doesn’t capture the true surreality of what we have just witnessed. Because horse-racing is not a sport in any conventional sense. It exists largely as a vector for gambling. Without gambling, the sport would not exist – aside from a vanishingly small number of marquee races, its stands are near empty. Its races play only on a channel owned by the TAB, New Zealand’s statutory monopoly supplier of bets on its races. This is not to suggest there aren’t many wonderful people involved in the broader equine world – but that its racing subset is almost entirely about facilitating hundreds of short, sharp opportunities to gamble.

Other areas of our society that facilitate gambling, like casinos and pokie machines operators, are forced to operate under (relatively) onerous restrictions, and give back to the community through grants to arts foundations or sports clubs. The Lotteries Commission, which operates Lotto and Instant Kiwi, distributes tens of millions in grants to entities like Creative NZ and Sports NZ.

This is a recognition that gambling causes social harm, and only the offsetting of social harm with social good can justify its existence. (And that by making gambling illegal, you simply drive it underground and ensure that it is purely a social harm.)

Gambling on professional sports was introduced as a way of helping to fund its grassroots amateur ecosystems, and a slice of the profit goes back to those roots – though only after it has helped fund the TAB, which is run and controlled by the racing industry.

Which is to say that all New Zealand’s legal gambling is offset by its returning some of its proceeds to a relevant community, and even those who find gambling unpleasant or immoral would at least take some solace in knowing that everything from club rugby to opera gains from its existence.

Horse racing is essentially a charitable purpose unto itself, for reasons surely only Shane Jones could explain with a straight face, meaning that money raised through gambling on the product is ploughed back into creating more of the same product for people to gamble on. The proceeds of gambling on horse racing can be spent on promoting more horse racing and even on prizes for horse races, and that’s a charitable purpose in this upside-down world.

This would be bad enough if it were solely a self-perpetuating gambling universe. But for many years horse racing has been suffering a fast-ageing audience. Somehow, despite having spry young influencers like Winston Peters turning out to extol its many virtues, its most fervent bettors are well past 50. Where once it was able to carry its own weight, it now requires increasingly significant public subsidy.

This is where the most recent term of government has been truly appalling. Peters secured himself the minister of racing portfolio, and set about initiating industry-approved reforms of the racing board that happily consolidated power over the TAB. Then came a $72.5m bailout for the industry during Covid-19 lockdown, well before yesterday’s revelations about Riccarton. The two all-weather racecourses (the second is at Awapuni in the Manawatū) exist because, to the industry, one of the problems that bedevils it is that rain sometimes means meets are cancelled, and thus people have to delay their gambling. Now, thanks to tens of millions in government funding, the gambling will go on regardless of the weather. Jones himself told RNZ that “the need for all-weather tracks was highlighted in an independent review of the racing industry”.

There are plenty more scandalising elements to the story of horse racing. The animal welfare concerns (though Jones claims these are partly addressed by all-weather tracks). The opacity of the industry’s donations to the New Zealand First Foundation, the activities of which are currently under investigation by the Serious Fraud Office. The fact that the PGF, which is meant to be first and foremost about reviving the economies of the regions through jobs, is funding a racetrack in a large city, with long-term jobs listed as “unknown”.

At this point, though, does anyone seriously believe that there is any case for racing industry support outside of NZ First and the industry itself? The bigger question is what the next government will do about it. On current polling, NZ First is a long way out of parliament. That race ends on September 19. Whether horse racing remains New Zealand’s least-deserving winner after that date is still an open question.