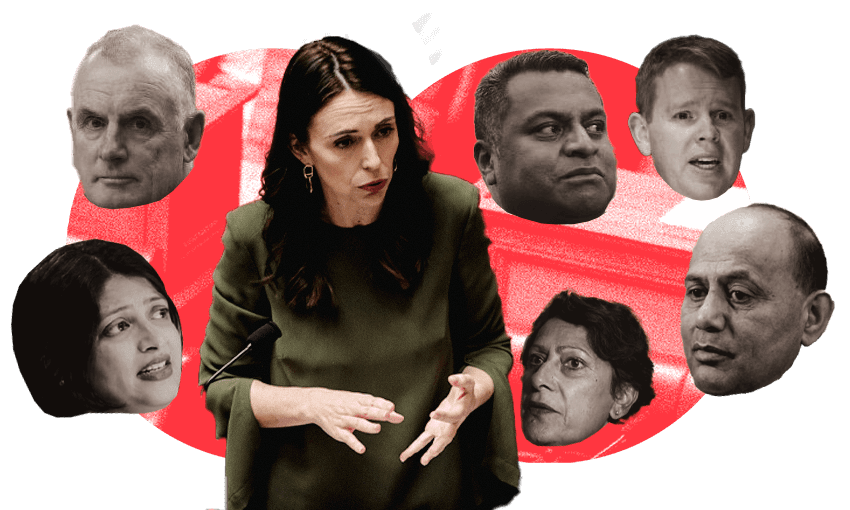 Kris Faafoi is leaving, Poto Williams is demoted, and Trevor Mallard is leaving the country. Toby Manhire attempts to make sense of a blustery reshuffle.

For what was billed as a “minor reshuffle” there was a lot of – what’s the word? – shuffling. It took the prime minister seven-and-a-half minutes to announce the changes, and though Jacinda Ardern can rightly say a bigger reshuffle is coming next year and that today only one new face is coming into cabinet, 15 MPs’ job descriptions change in a significant way – and that rises to 18 if you count the two newbies coming in off the list, the departing speaker, Trevor Mallard, and his near-certain successor, Adrian Rurawhe. Minor it is not.

Why were the prime minister’s spin doctors so keen to sell it that way? Probably because, beyond the shuffling or otherwise, the announcement contained three major news lines, of varying degrees of awkwardness. First: the departure of Kris Faafoi, which left three portfolios vacant. While that was characterised as the domino from which everything followed, however, it was quite unconnected to the second headline: replacing your police minister at a time when law and order is leading the bulletins. Nor the third: the imminent exit of Trevor Mallard from the speaker’s chair, from parliament and from the country.

In the cause of disentangling all of that, below are the main changes, and a cursory thought or two on each.

Blame Jason Kerrison. When Kris Faafoi was revealed in 2019 to have assured OpShop man, ark-fan and conspiracy theorist Jason Kerrison that he was doing what he could to help an immigration application, that was the first blight on a highly impressive political career. It had been so impressive that Ardern had begun to load him high with tricky ministerial warrants. The weight of those demands – and the compelling countervailing appeal of a young family – led him to tell the PM he was done. She persuaded him to stay on past the 2020 election.

The deal, apparently, was that he’d stay for a bit, but not the full term, moving to the list so a departure wouldn’t spark a byelection. But ever since, for all his rare smarts, empathy and competence, there’s been a sense in his handling of everything from the media merger to the residency pathway to hate speech proposals that he’s just kind of over it – that his head and heart are already halfway walking his son to school. The prime minister said: “He goes with the love and thanks of his colleagues for his contribution over many years,” and there was nothing spun nor minor about that.

Faafoi’s justice portfolio is picked up by Kiri Allan, who also assumes a new associate finance minister role, while immigration goes to Michael Wood, and Willie Jackson takes on broadcasting and media.

Allan has not put a foot wrong since she entered parliament in 2017. This is new test, but she has the legal background and, more importantly, intelligence and good judgment. Among her new responsibilities: assess a review of electoral law and decide whether Kim Dotcom gets extradited.

Immigration can be a hot potato, and Michael Wood gets it because, said Ardern, it “fits with his workplace relations portfolio and our focus on skills”. A straight-talking politician cut from traditional Labour cloth, Wood is about as sure as anyone to scrutinise every document that comes across his desk before signing it. But the piles on his desk must be forming towers: in workplace relations there are some big reforms under way, and he also has the daunting transport portfolio to manage.

Like Faafoi, Jackson has a media background – and has already overseen a review of Māori media – but he’s got a couple of big new challenges on his plate. The RNZ-TVNZ merger is hurtling down the track, with only about a thousand important questions yet to be answered. And on the digital front, representing local interests against the leviathans of Silicon Valley is a project that no minister has yet managed to properly get a grip on.

Poto Williams has been shuffled out of the police portfolio and loses building and construction and associate housing, which Megan Woods adds to her housing role, but picks up conservation from Allan and disability issues from Carmel Sepuloni.

Ardern has with varying degrees of rebuke removed ministers before – think Clare Curran, Iain Lees-Galloway, David Clark, Meka Whaitiri, Phil Twyford – but this one felt very much an exercise in disappointment rather than disapprobation. The subtext was: at a time when New Zealanders are concerned about crime and gang warfare, with opposition parties mounting law and order campaigns, the government needs to put up a more battle-hardened, quick-moving performer. It was about “the narrative”, said Ardern. She and Williams had “sat down and had a conversation about whether or not we were able to focus on those issues clearly in the current environment and both agreed we couldn’t and so we’ve made these changes”.

Chris Hipkins becomes police minister – he remains minister of education but associate minister Jan Tinetti takes over a “significant part” of the portfolio.

With the exception of the recent press in which he couldn’t remember the rules for the orange light setting, for which we can confidently blame post-Covid brain fog, Hipkins has consistently proven his command of some challenging portfolios. This new assignment confirms his status as Chris Fixit Hipkins. (Chris Fixthings?) That reflects his conscientiousness and competence, but his workload is immense –he’s also minister for the public service and leader of the house – personifies the argument that there is a shallow talent pool.

In taking on police, you can expect him to be at once more active in the weeds and dramatically more visible. Just imagine, the time is 1pm and he’s standing beside Andrew Coster to announce there are three new cases of ramraided Queen Street shops but the seven-day rolling average is on the decline.

Hipkins vacates Covid-19 response, which is picked up by Ayesha Verrall, who also gains research, science and innovation from Megan Woods.

Verrall is a very rare thing: she’s been a cabinet minister since being elected. And it turns out it’s very useful to have an infectious diseases physician at the cabinet table during a pandemic. That background means she’ll know better than many that “post-Covid” is a dream not a reality, and she’s as well placed as anyone to set up the inevitable review of New Zealand’s pandemic response and help us get prepared for, gulp, the next one.

Meka Whaitiri remains a minister outside cabinet but picks up food safety from Ayesha Verrall.

After being demoted in 2018 over an “incident” with a staff member, Whaitiri’s hopes of one day returning to cabinet get a boost. A minor boost, maybe, but a boost.

Trevor Mallard to leave parliament, Adrian Rurawhe to be nominated for speaker.

Not a cabinet matter, this, but a big ol’ shuffle. Mallard, the speaker, father of the house and a parliamentarian of 35 years, had some time ago signalled his wish to, ahem, “transition out of the role”, Ardern said today. It’s been a popcorn career: polarising, punchy (literally, sometimes), self-important, impassioned and generous. A decent babysitter, too. Adrian Rurawhe is to be nominated as his successor – a popular choice across the house, and, frankly, a welcome change in tone.

Ardern was emphatic: Mallard’s exit is not a consequence for his irascible management of the house or his provocative and perplexing response to the parliamentary protest. And he’s leaving for an existing diplomatic posting, not to an ambassadorship conveniently magicked up, as it was for, say, Louisa Wall. Where is he going? All we’ve been told so far is “somewhere in Europe”. On which, I will note only this little known fact: Barry Manilow is half-Irish.