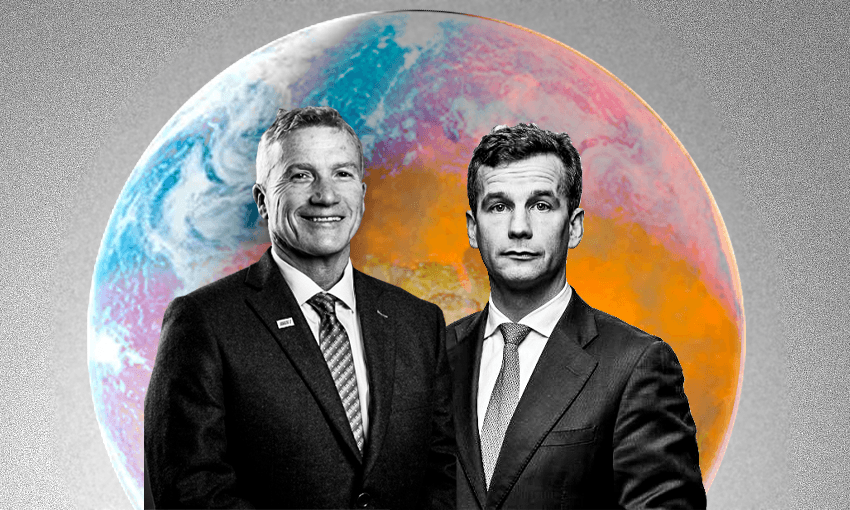 A Nelson-based candidate for the Act Party, who’s all but certain to be in parliament after the election, rallied against the local council for its position on “so-called ‘climate change'”, convened “Climate Hysteria Skeptics” meetings at the high school where he teaches, and attacked activist Greta Thunberg as “a Swedish girl with Aspergers and well known mental health issues”.

Chris Baillie is number four on Act’s list and standing for the party in the Nelson electorate. His online bio says he has a strong interest in sport and music, is a former policeman and a full-time secondary school teacher. David Seymour is quoted as saying Baillie would bring common sense to parliament.

But former students who attended Nayland College, the school Baillie teaches at, have spoken out about meetings he used to run where he would, they said, push back against the scientific consensus on climate change and claim climate hysteria was contributing to New Zealand’s youth suicide rate.

“[Baillie’s] main claim was that ‘climate hysteria’ was driving high rates of depression in youth and contributing to suicide rates,” one attendee told The Spinoff.

“The first meeting I went to, he placed a heavy amount of blame on Alexandria Ocasio-Cortez and the Green New Deal.”

Baillie routinely cited evidence sourced “from shady far-right blogs” and those in attendance would discuss them, the student claimed.

“He continually presented us with scientists who had spoken out against the ‘climate hysteria’ and been silenced.”

Baillie has previously said the meetings were a forum to promote critical thinking – a view one of the students rejected.

“Baillie attempted to provide ‘scientific evidence’ that cast doubt over climate science. He tried casting doubt on climate activists like Greta Thunberg by citing funding sources and ‘conflicting interests’ from groups like Extinction Rebellion,” they said.

This isn’t the first time Baillie has been criticised for holding these meetings, but emails obtained by The Spinoff show the depth of the prospective MP’s beliefs.

In one, Baillie invited Nelson’s mayor to speak at one of his “Climate Hysteria Skeptics” meetings in December last year, citing his “deep concern” for young people.

“I want to add some common sense to the lives of students who are not only afraid, but suffering from mental health issues, due to the constant barrage of unproven speculation and hysteria surrounding so called ‘Climate Change’,” Baillie wrote.

The mayor was asked to justify why Nelson was placed into a “climate emergency”, among other requests.

“I appreciate the sensitive reactions any sort of discussion on this topic evokes (can you believe ‘science’ cannot be debated or even talked about!) and I am aware of the current flavour of many of your fellow councillors,” the email continued.

“However, as mentioned, I believe the rhetoric continually flowing from alarmists is causing a huge amount of damage to our young people and needs balance – or is the health of our current young people just collateral damage when looking at the potentially devastating future you believe may occur?”

Baillie’s email included a link to a documentary called The Great Global Warming Swindle – a film which argues against scientific thinking on climate change.

“Although it is 12 years old it is still very relevant today. History doesn’t change,” Baillie said in his email. At the time the documentary first aired in the UK, the country’s broadcasting watchdog Ofcom reported 265 complaints about the programme’s factual accuracy – including a 176 page complaint written by a group of scientists.

Baillie’s email to the mayor was also distributed to the wider council, including environment chair Kate Fulton. She emailed Nayland College questioning the “level of misinformation”.

“Are you aware that a teacher is taking this approach?” she wrote to principal Daniel Wilson. He did not respond to Fulton but told The Spinoff he “trusted the professionalism of [his] staff member”.

“[Baillie] assured me it would be a balanced discussion,” Wilson said.

“My understanding of the group was that it was to try and alleviate student fears and anxiety (hence the unfortunate reference to ‘hysteria’, which was removed) about what is happening with climate change across the world.”

He added: “Senior staff members and members of our Environmental Sustainability Team also attended the few small meetings that were held. As a school that promotes freedom of speech, we would be on shaky ground if we did not support an opportunity for students to debate this very important topic.”

Wilson rejected claims by students that the meetings were only shut down by the school ahead of a visit by the Education Review Office.

The Spinoff has also obtained an unpublished letter to the editor submitted to the Nelson Weekly newspaper last year written by Baillie, in which he rails against a previously published column arguing that this generation should commit to climate change action for the benefit of the next.

Baillie labelled it an “emotional diatribe of doom and gloom” and said it came “straight from the song sheet of a 16-year-old Swedish girl with Aspergers and well known mental health issues” – a reference to climate change activist Greta Thunberg who refers to her Aspergers as her “superpower”.

“The way Greta Thunberg is being used to proliferate agenda-driven propaganda is despicable. The way some people fawn over her every word would be hilarious if it wasn’t so dangerous,” Baillie wrote.

Once more, Baillie linked to The Great Global Warming Swindle documentary, urging the writer to watch it. He also directed them to two websites that promote climate change denial, including one run by a former Republican party aide who has previously described Thunberg as an “autistic prophet”.

“The myth of settled science, the quoted 97% scientist consensus, and the ridiculous ‘what ifs’ are well explained,” Baillie said about the websites.

“The damage to our young people due to this current irrational climate change hysteria (coupled with no-hope scenarios) is already being documented as contributing to our shameful suicide statistics.”

In a recent Nelson candidates debate, held in the build-up to the election, Baillie was asked about this particular letter to the editor. Baillie refused to condemn his comments saying: “I don’t like the hysteria surrounding this topic [when] we have people taking kids out of school, climate strikes, advocating and condoning truancy”.

Speaking to The Spinoff, Baillie defended his high school meetings, calling them “discussion groups” to promote critical thinking. However, in hindsight, he admitted the words “hysteria” and “skeptics” may have given the wrong impression.

“The focus was on hysteria and the times I did meet with the kids I said ‘[it’s] nothing about the climate debate’. It’s just the hysteria that I was focusing on,” Baillie said. “I’m an educator and kids need to think for themselves about this.”

He added: “It was at a time when we had schools condoning climate strikes and I didn’t agree with that. I was seeing at school a lot of kids affected by it, mental health-wise, and I certainly stand by that.”

Questioned on the resources he shared at the meetings, Baillie denied he was spreading misinformation. A lot of the information discussed was directly from the IPCC, he said. The controversial documentary referenced in both his email to the Nelson Council and his letter to the editor – The Great Global Warming Swindle – was simply a “discussion point”.

“I’d point out to the kids ‘hey have a look at this’ and let’s discuss it next week and see what you reckon and that’s what we would do. Often, they’d come back saying ‘here’s another website that debunks that’ and we’d say that was cool, just to get them thinking about things.”

Baillie would not say whether he regretted any of his past comments but said, in hindsight, he probably would not have pointed out Greta Thunberg’s mental illness.

“At the time, that’s how she was being promoted,” he explained. “My job at school is teaching kids with special needs and most of those are actually autistic or Aspergers. That’s how [Thunberg] was being portrayed and promoted at the time.”

Asked to give a message to the students who spoke to The Spinoff, Baillie said he doubted they even attended his meetings “because we had great discussions”.

“I stopped [the meetings]. I ran out of time I had other things to do, and I had students coming to me asking ‘are we meeting today?’ They just wanted to talk about it and tell me what they had found out.”

Despite claims that he is a climate change denier, Baillie emphatically rejected the term.

“I’m an educator,” he said. “I was encouraging critical thought.”

Act is on track to win 8% on election night, according to the most recent Colmar Brunton poll, meaning it will have 11 MPs in the next parliament.

Know more? Email me at stewart@thespinoff.co.nz