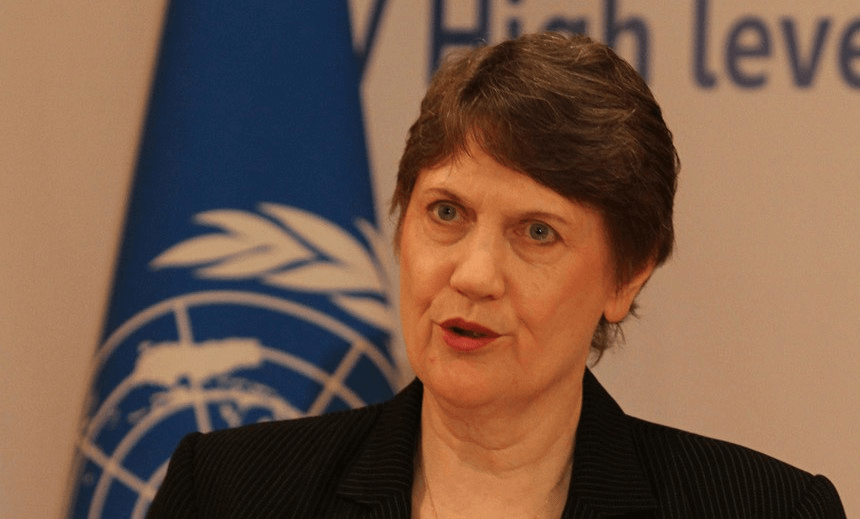 Helen Clark faced the United Nations overnight in a marathon session in New York to pitch her case for becoming the next secretary-general. Former Herald editor-in-chief Tim Murphy set the alarm to watch.

It was billed as the “Job Interview in Front of the Whole World”.

Live-streamed from the United Nations in New York, one person in front of 173 ambassadors intent on throwing all the world’s problems at the applicant.

Helen Elizabeth Clark, ONZ and SSI*, was second to last of the nine declared candidates hoping to be the next UN Secretary General to undergo this landmark international grilling.

She received the most questions of all, 88 from 45 nations, and clearly relished the challenge.

Clark, 66, and seven years into her role as Number 3 at the UN heading the development programme, faced questions on everything from her use of Twitter to genocide and climate change.

One ambassador commended her “forceful” presentation, but only once did Clark bare her teeth, to a suggestion she might be the “establishment” candidate and suffer because of association with current UN problems.

The format and the language of the UN is ponderous, respectful (everyone is called “Excellency”) and littered with acronyms. The SIDS, LDC, LDDC states had meaningful questions on the SG’s view of the QCPR and the ECOSOC dialogue. (Don’t ask!)

Clark heard from the Group of 77 plus China, the Group of Four (Japan, Brazil, India and Germany, who want to expand the five permanent members of the Security Council), CARICOM for the Caribbean, and the Landlocked Developing Countries.

It is her language now and in the Trusteeship Council Chamber setting she had home game advantage.

Her nine minutes of Opening Statement were word-perfect – the efficiency of one minute saved not lost on those demanding reform of the UN.

“I grew up on a back country farm in New Zealand … Ambitious but realistic … hardworking and resilient when times get tough,” she began, running through her activist time against apartheid, her parliamentary years and time at UNDP.

She let the diplomats know she knows their bosses. “I have met and worked with many of you in this room. I have met many of your presidents and prime ministers and ministers over the years and listened and learned a lot from them.”

There was one boast, that the UNDP was ranked most transparent development organisation in the world. (Later, a UN blogger for Foreign Affairs magazine tweeted that never extended to open relations with the press at UN HQ.)

“I believe the UN needs a proven leader, who is pragmatic and effective,” she said.

Then, citing a background of high cultural diversity, Clark quoted in both languages the Māori proverb, “What is most important thing in the world? It is people, it is people, and it is people.”

On the day, however Miss or Mrs Clark (no ambassador used the Ms) did not break into Français. Others in the field moved seamlessly between the two languages but Helen was resolutely English.

Clark’s manifesto promise was simple. With the slogan “A better, fairer and safer world for all”, her vision was for a UN that

– Is a flexible, practical and effective organisation

– Anticipates and responds to the world

The “informal dialogues” were anything but, to the real world. The General Assembly President, His Excellency Mogens Lykketoft, “gave the floor” ceremoniously to nations representing one of the many groupings and Clark scribbled down their questions.

How would she make the UN more efficient, more gender and geographically equal, work better with regional groupings, focus more on Africa, ASEAN, small island countries? Would she favour one non-renewable seven-year term over the current renewable five year terms? (She was “relaxed” about that).

If successful, would she be a Secretary, a General, or, as Saudi Arabia ironically offered, “the conscience of the world”? The British ambassador had earlier called outside the chamber for “less of a secretary, more of a general” but Clark was disarming. “The Secretary General cannot be a general because there’s not an army. It is about advocacy and mobilising opinion. Definitely upholding the rights of the marginalised and the voiceless.”

Then in a run of 30 questions at the end, with Clark given 14 minutes to answer, came the zinger, from the Ambassador of St Vincent and the Grenadines: “You are virtually a household name at the UN and among member states. Perhaps you could even be described as ‘the establishment candidate’ (when the UN has known problems). What fresh and innovative thinking is a key component of your tool kit?”

You could feel, down the webcam and out of shot, the grimace cross Clark’s face. When she came to it, between talking nuclear disarmament and the rotation of key UN roles among regional groupings, she was, well, forceful.

“What I want to say is this. I have never been an establishment contender for anything. I have come from the outside to everything I have done. From rural upbringing to urban life, as a woman breaking into a man’s world, as PM as the first woman to be administrator of UNDP.

The man from the United Kingdom asked, after a query on clear breaches of the UN Charter and what she would do in such an instance if elected, whether she would use “Twitter and other social media to pursue your goals?”

Clark, with 120,000 followers on @helenclarkUNDP and more than 5000 on the @Helen4SG account, was happy for the relief. “I did see a tweet from a member of the public who said, ‘my greatest fear is that Helen Clark will stop doing her own tweets.’ But I am very interested in continuing to hear from people in the widest possible circles.”

From the eight presentations observed for this piece, Clark’s was the most densely questioned. It was exhausting from thousands of kilometres away.

Her current opponents (and others, including Kevin Rudd, could well join the fray later) were mostly impressive. It is Eastern Europe’s “turn” if the rotation policy for the role is followed. And the leading contender from the region, Bulgarian head of Unesco Irina Bokova, had been measured and footsure.

It is a prominent UN organisation and she talked it up. “I am a very happy person because I am leading a beautiful organisation with a beautiful mandate. It is the soft power of the UN, protecting the incredible world of cultural diversity.

“I have the audacity to present myself for this position now.”

She posited Bulgaria as the cross roads of north and south, east and west. It has a heritage of “thousands of years of society”.

But Bokova has a PR problem – the day of her interview the Daily Mail reported UK unease at her alleged lack of judgment in hiring a friend to a key Unesco position.

Lynch, of Foreign Affairs, concluded: “It remains unclear whether Bokova can survive the campaign for the top UN job, given London’s (veto holding) concerns about her judgment.”

Antonio Guterres, a former UN high commissioner for refugees and former PM of Portugal, is the only non central or eastern European other than Clark. He was credited with the best performance on day one of the three days of dialogue. “The best place to address the worst cases of human suffering is the centre of the UN system and that is why I am a candidate.”

He could have been marked down for joking about advancing a UN “without acronyms”.

And Vesna Pusic, Croatia’s foreign minister, is another woman with a back-story hard to match. Being able to tell the General Assembly about “when we ended our war” does carry a certain respect.

Clark might have the slight untidiness of New Zealand featuring so prominently in the Panama Papers, but then the UN represents all the tax havens as well as the non-tax-havens like ours.

What happens now? Back to work for Clark travelling the world, engaging and partnering with these very nations in her development work. In July the Security Council, which has the final say, will begin its considerations. There is another round of informal dialogues, perhaps with new candidates joining, after that.

Lykketoft, yesterday’s chair, has previously said: “If a majority of the nations rally around one candidate, it will be very difficult to think of the Security Council coming up with another, different name. But if there are many candidates and no clear picture, it could very well be the same end-game as it used to be.

“I hope that the world and the world powers are ready to accept that the SG at the outset should be a strong and independent personality.”

Clark used different words this morning for the same ambition: “I am a pragmatic, moderate person, very task-focused. I’ve never been after personal glory.”

*Clark’s honours are ONZ (Order of New Zealand) and SSI (Star of the Solomon Islands, for helping resolve war there in the 2000s).