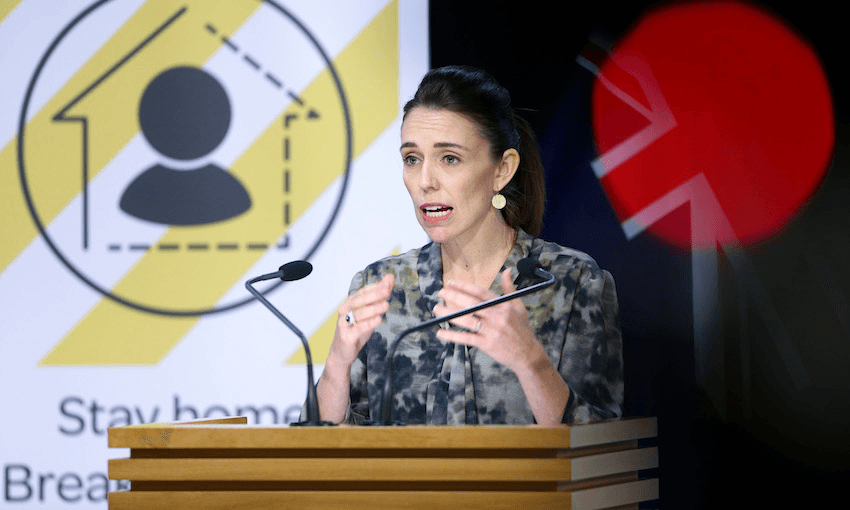 Prepare to go much harder and much earlier if coronavirus appears in the community. Justin Giovannetti reports from parliament where plans have been released for swift regional lockdowns and managed-isolation for domestic cases if Covid-19 ever breaks out of border facilities.

New Zealand hasn’t detected any community transmission of the Covid-19 virus in 75 days, but that pandemic holiday could come to an end at any time, prime minister Jacinda Ardern cautioned today.

There’s no new health warnings behind the notice. Instead, government officials have been looking overseas with concern. Every country that has come close to eliminating community spread of the coronavirus has seen it return. Even strong borders have shown themselves to be porous.

The real “cautionary tale”, according to Ardern, is across the Tasman. Details about the outbreak in the Australian state of Victoria has been making the rounds of the Beehive in recent days. The state has seen triple-digit daily increases of the coronavirus and a six-week lockdown in Melbourne, all fuelled by two cases linked to border facilities there.

“The virus can spread and it can move from being under control to out of control, and even the best plans still carry risk in a pandemic,” said Ardern, speaking at the Beehive this morning.

She warned that even the best trained and best equipped staff face a high risk of picking up the virus at one of New Zealand’s border facilities. As cases increase around the world, growing numbers of people coming into the country have Covid-19. Eventually, whether through a moment of inattention or a stroke of bad luck, the virus could escape New Zealand’s facilities.

“We must prepare now for that eventuality and have a plan at the ready in the event that it does,” Ardern said.

The prime minister made the announcement as her first public splash after nearly a week on vacation. The unspoken message was that while the opposition has gone through another leadership crisis, the Labour-led government has been focused on the health response.

Asked for her thoughts on the new National Party leader Judith Collins, Ardern would not be drawn, saying that though she did “absolutely accept that there is an election this year”, she was not for the time being interested in “politicking”. The strategy is clear: keep governing as long and far as possible, and avoid being drawn into an early tit for tat campaign.

Ardern’s renewed emphasis on a public health plan also follows the quiet move last week to reverse the government’s slogan from “unite for recovery” back to “unite against Covid-19″.

New Zealand now has a plan to respond to an outbreak of the virus beyond the border. It takes the government’s mantra, “go hard, go early” and intensifies it. This is now much harder, and much earlier.

Lockdowns will be thrown around any community transmission found in the country. If caught early, the lockdowns could be localised to a neighbourhood. Otherwise, entire cities or regions could be cut off. If that fails, the country as a whole could return to level four.

There could be advisories calling on people to wear face masks. Door-to-door testing in neighbourhoods could become necessary.

There will be no 48-hour warning like the previous moves between levels. The experience in Australia shows the virus moves too fast, Ardern warned. Much of the government’s announcement today had been discussed in cabinet documents released last month. What was then discussion is now policy.

The government’s view now is better safe than sorry. “We’d much rather take that approach than find that we haven’t done enough in the first instance,” said Ardern.

A role for the military

In the case of a regional lockdown, based on the country’s large Civil Defence regions, police would first attempt to create hard checkpoints along regional boundaries. With very few exceptions, no one would be allowed to cross. Cabinet documents warn that it is likely the checkpoints would need to be manned by soldiers. There’s also the possibility of using automated license plate readers on rural roads and in cities to aid the police in finding scofflaws.

The government has drawn up maps of where checkpoints would need to be created between regions and has concluded 84 road crossings across the country that would need to be staffed. At most it would take about 1,260 soldiers and police to staff them all. In a note to cabinet, the police minister warned that “hard 24/7 controls in any numbers would alter New Zealanders perception of government control.”

While the health and justice ministries had told cabinet they were opposed to regional lockdowns in the past, Ardern said Wednesday that the government is basing its current plan on what has been learned in Australia. Officials there have largely shuttered the border between Victoria and its neighbours.

If only a few cases are detected, the government is prepared to remove individual New Zealanders from the community and put them into managed isolation facilities. The prime minister said this would help reduce the risk of transmission to their families. In cabinet documents, there was also discussion that this would help eliminate the risk of people breaking from self-isolation after testing positive.

Calling this the “stamp it out approach”, Ardern said people need to continue keeping diaries or using the government’s tracking app. They also need to keep washing their hands. She said people need to ask themselves this question every time they go out: “If I come into contact with covid today, how will I know, and how will others know?”

It’s been an ongoing struggle to get New Zealanders to use the Covid-19 tracking app. Usage figures show the stark reality: almost no one is using it. Only a few thousand scans are registered daily, instead of millions from each visit to a coffee shop, store or supermarket. If community spread were to occur, the data from the app would be instrumental to minimising lockdowns.

Health minister Chris Hipkins said New Zealand would have a world-beating contact tracing system, if only people used the app. Both he and Ardern said current usage rates are unacceptable.

“We will have a gold standard contact tracing system when every business and every public place is displaying a QR code and every New Zealander, everyone in the team of five million, is keeping a good, accurate record of where they are,” he said. Without it, the government could have to resort to “more drastic measures” in the future.

New National leader Judith Collins said she tried to use the government app but couldn’t get it working on her phone.

“I tried to use it two weeks ago and then I thought, ‘Come on?’ I couldn’t even make it work. People are now not using it so much because we aren’t in lockdown, are we? And I thought the borders were secure, aren’t they?” she told reporters at parliament.