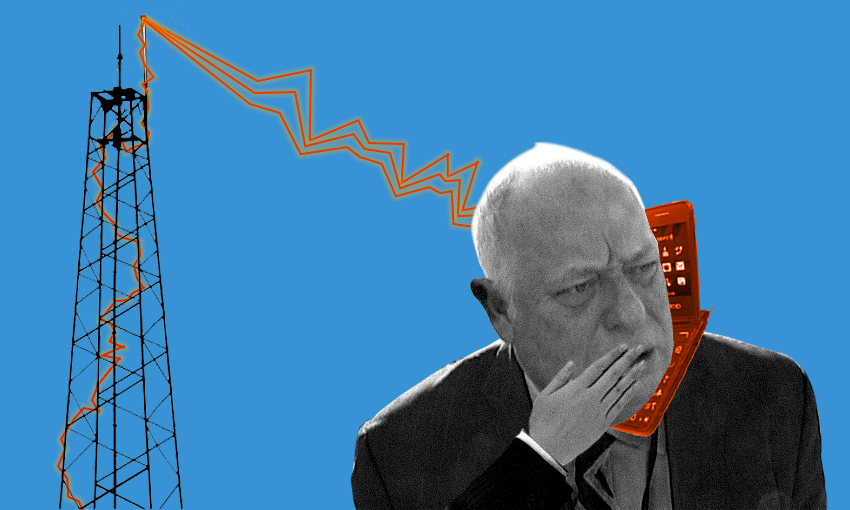 Merv endings: A deep dive into the world of phony political talkback calls

Newshub’s bombshell story about a Newstalk ZB caller named Merv rocked New Zealand’s political landscape. Roger Bridge, who stands accused of also being Merv, yesterday resigned from the National Party board. But he is far from the first political figure to don a fake name and ring a talkback station.

The hour before midnight on Newstalk ZB can be strange and listless, filled with lonely people, drunk people, and lonely, drunk people. On August 3, it became the unlikely forum for one of New Zealand’s strangest attempted political hit jobs, when late-night host Marcus Lush took a call from a man identifying himself as “Merv” from “Manuwera” (sic). For 10 excruciating minutes, Merv expressed confusion over the fact that Nuwanthie Samarakone, whom he called “that girl Nuwi”, was applying to be National’s Auckland Central candidate while still standing for election in Manurewa. No matter how many times Lush explained the situation, Merv would only reaffirm his confusion.

Anyone listening to the call would have been surprised to learn from Newshub that Merv was not one of New Zealand’s thickest men, but a National Party grandee posing as one of New Zealand’s dumbest men. According to political editor Tova O’Brien, Merv was thought in fact to be party board member Roger Bridge putting on a silly voice and mispronouncing te reo Māori. Yesterday he resigned from the board.

The stunt was a throwback in several ways. For one, it was part of a campaign of 1950s-style sexism surrounding Samarakone’s candidacy. But it also harkened to a different age of dirty politics. Back before the internet, political parties had fewer forums for their most scurrilous urges. Instead of laundering their attack lines through horrible toilet blogs, they had to direct their underhanded political efforts toward the task of dominating the airwaves on talkback.

Sir Bob Harvey remembers the teams of people who used to call up Radio Pacific during his days working as an ad man for the Labour Party in the 1970s. Around 20 or 30 party loyalists were charged with donning fake identities and ringing talkback stations to raise issues that painted Labour in a good light, he says. “We had a whole team of people that were based on the [North] Shore that had time. It was like a golden age where people had time and a phone. They would ring talkback into the night.” Harvey admits to making a few of the calls himself. He won’t give details on the topics he raised, but asserts that he was “quite good at it”.

Former Labour Party staffer Phil Quin also admits making several pseudonymous calls to talkback stations while he was serving on the party’s research unit in the early 90s. His efforts included one disastrous encounter where he posed as a listener with a question for then-leader Mike Moore.

There were other, more successful, calls as well. “I did it a few times,” Quin says. “Used to bullshit that I’d tried and failed because I really hated it. Terrible butterflies.”

Quin didn’t act alone. Labour had units of party faithful charged with making talkback calls under false pretences in the 90s, he says. “It was a fierce battleground and phone banks for volunteers were commonplace. Any such shenanigans probably take place online these days.”

Perhaps the most famous phony political call came from former National MP-turned-Far-North-mayor John Carter. He rang then-Radio Pacific host John Banks in 1995 pretending to be a “work-shy Māori” named Hone. Carter was sacked as the party’s whip following the incident. His act was racist and indefensible, but was it really that out-of-the-ordinary? Carter refuses to talk about the matter to The Spinoff, even if it means losing a chance at a measure of redemption. “I’ve made it very clear as mayor that I’m apolitical and I don’t want to get involved,” he says, in reference to something that happened roughly 25 years ago.

The man he talked to on air is less reticent. In a shock twist, John Banks says it was actually him who orchestrated the “Hone” call. It wasn’t the only time Carter had rung into a show posing as someone else, he says. “John Carter would mimic a lot of people. He was very good at it.”

Banks says Carter was only found out because a reporter at the Northern Advocate complimented the “Hone” call during a casual conversation. “Carter couldn’t help himself. He had to cop to it. The aftermath to that was that Carter was standing outside Bolger’s office at quarter to nine the following morning shaking like a bloody leaf.”

There may be some artistic licence in that assertion, as then prime minister Jim Bolger was in Washington at the time Carter’s call was made. Nevertheless, Banks says he never encountered any formal scheme aimed at gaming the talkback system during his time as a National minister in the 90s. That doesn’t mean party faithful weren’t asked to deliver their views on air, he says. “We would encourage people – hapless people – to ring talkback all night, every night. But we would never encourage people to call themselves Merv or anything else. The people on the left are expert at it. The National Party wasn’t smart enough to do that.”

That doesn’t mesh with what Quin remembers. He insists it wasn’t just Labour putting fake talkback fans up on the airwaves, and that National and “even the Alliance” were telling their supporters to make calls under false pretences.

Was National really guilty as well? At least one political commentator, who asked to remain anonymous, does admit to participating in light media manipulation in support of a right-wing party roughly 20 years ago – though it didn’t involve talkback radio. The commentator was asked to write bullet points, and sometimes whole letters, which party supporters would send to newspapers to be published as letters to the editor. “Everyone did this and probably still does,” the commentator says.

These sorts of schemes may seem quaint by today’s standards, where politicians and their supporters have several social media conduits through which to release their unfiltered messages. But is there still power in talkback deception, even now?

The same night Merv’s true identity was revealed on Newshub at 6, National held the selection meeting for its Auckland Central candidate. The two finalists were Samarakone and fellow political newcomer Emma Mellow. Samarakone lost the vote, and Mellow was announced as Nikki Kaye’s replacement. Merv may be a figure of derision. His call may have been a senseless, mind-numbing train wreck. But even at 11.35pm, his message seems to have got through to the right people.