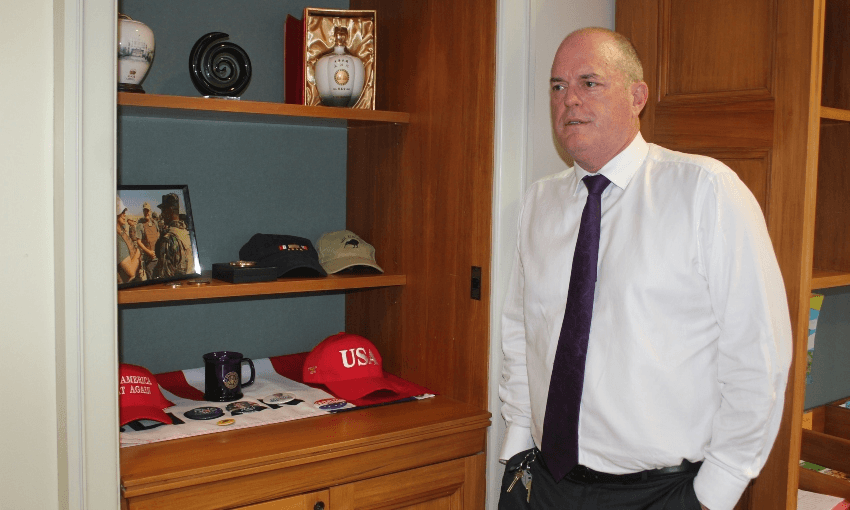 National’s new agriculture spokesperson finds himself in one of the party’s most important portfolios, at a time of dramatically increasing tensions in the sector. Will Todd Muller, a man regularly mentioned as a future leader contender, find common ground?

Todd Muller’s obsession with politics began with an American encyclopaedia, which his parents bought from a door to door salesman in 1979.

The long biographies of US presidents jumped out at him. He copied their signatures, and drew pictures of them. In time, Muller even came to write a book about his future political dreams.

It was an ambitious plan, and he admits in hindsight that there are a few reasons it might not have come off.

There’s a fair bit of American paraphernalia around the Bay of Plenty MP’s office at parliament. Among the items, a Make America Great Again hat picked up during a trip to observe the frenetic 2016 campaign. He refuses to put it on for a picture, for obvious reasons.

Because after all, hasn’t he noticed that everything in American politics has gone to hell in a handbasket recently? He has, and blames the extreme polarisation and partisanship that has developed, the extreme urban and rural divide, and the gerrymandering that screws voters out of being able to vote in competitive elections.

“I find it quite depressing,” he admits.

At the same time, Muller remains an admirer of the American system, in part because when it works it can showcase the best example of bipartisan compromise. That tension, between partisanship and reaching across the aisle, has been the defining theme of a year in which Todd Muller has risen to much greater prominence than he ever held during his term as a member of the last National government.

As the party’s climate change spokesperson, he forged an unusually constructive relationship with Green Party co-leader and climate change minister James Shaw, during negotiations around the Zero Carbon bill. He still speaks warmly of Shaw, even though National is now threatening to pull away from the bill, over methane targets they believe are too harsh on farmers.

But for a brief moment, it almost looked like all of the toxicity might have been taken out of climate change politics. Muller even made a habit of telling meetings full of farmers, who may have been inclined to indulge in denialism, that climate change was real.

There seems no chance of a similar detoxification in his new portfolio. As National’s agriculture spokesperson, he is the party’s direct line to their most loyal constituency – farmers. He doesn’t see anyone in any of the parties of government that he could work with in the same way around agriculture. And right now, Muller says, farmers are absolutely furious.

He says they’re being demonised by the government over water quality, and never given credit for improvements that are being made. He says they’re struggling with costs being imposed for environmental measures. He pointed to the high rates of rural suicide, and warns of “tragic outcomes” if farmers get pushed to the brink.

But is this not just more partisanship? Is Muller going out of his way to inflame tensions, to whip farmers up enough that they’ll get out and vote in droves? No, he insists, he’s just picking up on what he’s being told, and it’s his job to give voice to it.

“That anger is very real, and I experience it and see it every day because of the role I have.You absolutely get the sentiment that you’ve got 23,000 farming families out there, in, I think a difficult environment that most New Zealanders don’t understand, of being on the farm and on the land.”

Farming is personal for Muller, who grew up in the small settlement of Te Puna, to the north of Tauranga. His parents started a small orchard, which at the time was growing Chinese gooseberries, later known as Kiwifruit after one of the most successful rebrandings in history. While his parents later went on to found the Apata Group, a post-harvest giant in the Kiwifruit world, the early years were difficult.

“My parents did well to protect us kids from it, but the tension of just keeping the thing afloat… there is something about working your whole year for a crop that’s sitting there, and you need it to be harvested soon, and pack out well, and you’ve got hail clouds pending. It’s quite extraordinary.”

For Muller himself, that wasn’t the pathway. “I wasn’t naturally inclined, in terms of being able to be that competent on the orchard,” he says of his prospects of becoming a farmer. Instead, after doing English, History and Politics at Waikato University, he got into agribusiness. His career took him to both Zespri and Fonterra, and he’d almost certainly still be there had politics not called him back.

That too had been in his blood, as the grandson of five-term Te Aroha mayor Henry Skidmore. There’s a painting of the mayor above Muller’s desk, and he describes Skidmore as one of his biggest mentors. “He was from that generation, where community service was just part of his essence. Everybody knew them, and they just gave their whole life to the community. And it had a huge impact on me.”

Now he’s seen as a rising star. In the way it happens at parliament, his office has literally moved upstairs alongside his rise up the party ranking. There have been various media reports indicating that he’s seen by some as a future National leader – particularly if incumbent leader Simon Bridges was to botch the 2020 election.

Muller is very clear that if the opportunity came up to be the leader, he would absolutely take it. But he also gives his full backing to Bridges, who, Muller believes, is looking increasingly assured in the role. “Something has happened in the last two or three months, there’s a change I tell you.” He says it’s particularly noticeable when outside of Wellington, and says a “sentiment has crystallised” that Bridges would be able to lead a “competent alternative government than this lot.”

Muller’s next big target to try and make that happen will be on the government’s moves on freshwater quality, which have terrified many in the farming world because of their ambition and scope. Dire warnings are being sounded that farms will be put out of business. If the sector is going to see Muller as their champion, he won’t get there by preaching compromise.