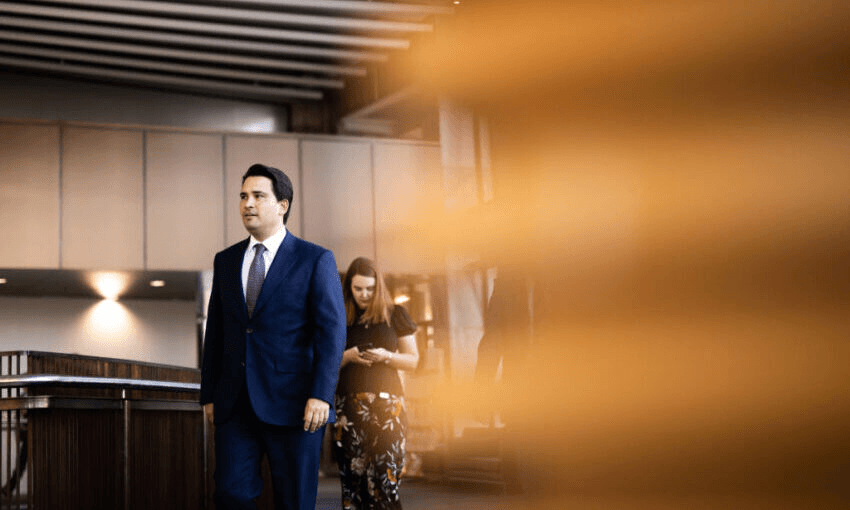 Simon Bridges’ leadership hangs by a thread after ‘mind-blowing’ poll

At under 5% in the preferred PM stakes, the National leader’s response to the Covid crisis is going to the talk of his caucus, writes Toby Manhire.

Staring this morning at the numbers from the Reid-Newshub poll, with exactly four months to go to the election, Simon Bridges must feel he’s been dealt the most diabolical political hand imaginable. But luckless though he might be, he has been the author of much of his own misfortune. While the country fortified itself against the Covid crisis like an armoured bear, Bridges was a buzzing, irksome fly.

He hit the right note in parts of the Epidemic Response Committee, but for every hour of able chairing there was an angry, overwrought Facebook post, a salvo condemning acting too slowly, a salvo condemning acting too soon. It was sporadic, unsteady, atonal. Too often in the upside down world of lockdown he simply failed to read the Zoom. When parliament resumed properly it seemed as if some kindly adviser, keen to calm him down a bit, had. Written. Full. Stops. After. Every. Word. In. His. Speeches. There was time between sentences to pop away and make a cup of tea. But slow is not the same thing as statesmanlike.

How bad are the numbers? The top line of the Reid Research poll for Newshub puts Labour at 56.5% ahead of National on 30.6%. By comparison, four months out from the last election, the Reid-Newshub poll out Labour on 30.4% and National on 46.4%. That is a mighty swing.

For Bridges, however, it’s a double whammy. Not only has the party he leads, the biggest in parliament, sunk to 30%, his personal rating has plummeted. To drop by six percentage points to 4.5% is ineffably grim. The only consolation, if you’re desperate, is that Judith Collins (on 3.1%) has not overtaken him.

Not entirely without cause, Simon Bridges blamed the starvation of attention. There had been “wall to wall coverage” of the government response to the lockdown, he told Newshub, repeatedly. But that’s unlikely to be anything like enough to quiet the disgruntled noises in the National caucus. There was said to be dissatisfaction with the leader’s tactics, and frustration that recent internal party polling had been kept from all but a few MPs. Assuming that looked like yesterday’s poll, you’d hardly blame them. But as the days to the general election draw closer, there are plenty of sitting MPs for whom there is nothing to lose and everything to gain in a change of the guard.

Whether someone else would want to take the wheel is another question entirely. True, you might calculate that it’s a hiding to nothing: better to bide your time. There’s another way of looking at that, however: the only way is up. Honourable defeat wouldn’t be a terrible place to start the next term. And the most recent data point suggests the best moment to become leader is around two months before an election. Jacinda Ardern found that the best time to be in the hardest job in politics was almost no time at all.

Certainly, the coming days will witness a consistent theme: Is it Judith Collins’ time at last? Is a Todd Muller and Nikki Kaye ticket an option? Does Mark Mitchell have what it takes? As we await the Colmar Brunton poll for TVNZ, reportedly coming later this week, these are hardly unreasonable questions for National MPs and the wider public to be asking. Not when the leader has been in the job longer than two years. Not when less than one in 20 voters wants him to be prime minister.

“Prepare to have your minds blown,” said political editor Tova O’Brien, teasing last night’s poll in the time honoured Newshub style. She wasn’t wrong. But the truth is pretty much everything’s mind blowing these days, every direction you look. The very last thing you want in your leaders is volatility.

The most astonishing of all the numbers in last night’s poll wasn’t expressly party-political at all. Echoing the result of Stickybeak surveys for The Spinoff, an extraordinary 91.6% said they believe the government made the right call in putting New Zealand into lockdown for four weeks. That number is the centre of gravity for the rest of the Newshub poll, and for all that Ardern warrants the plaudits raining down, it is inconceivable that it will stay there amid the economic and social pain that is to come.

Had Bridges shown a consistency and steel across these unimaginable last few months he might have – just maybe – positioned himself as the kind of leader who could navigate the country out of all that.