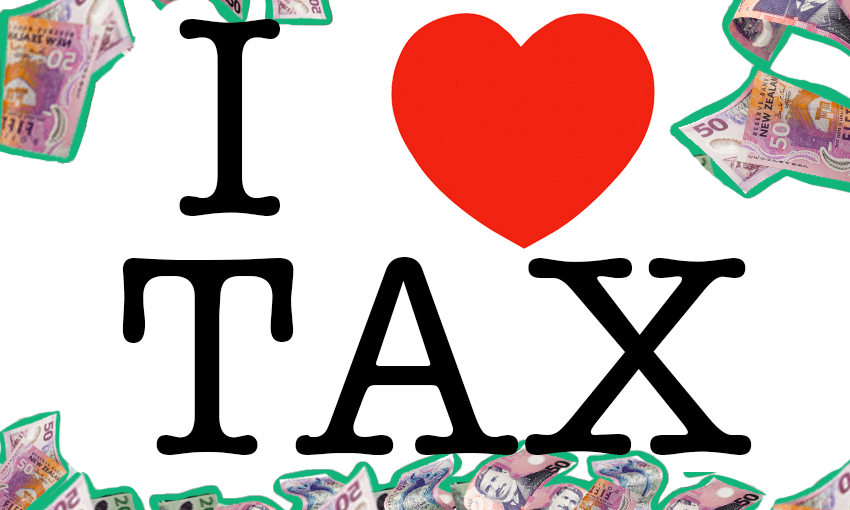 The case for tax (more of it, much more)

Let’s put tax at the core of this election. Sharing wealth is how we share care and responsibility for this land and all of the people in it, writes Laura O’Connell Rapira.

It’s election season in the middle of a pandemic and global economic crisis. These are strange times we find ourselves in, and looking after each other has never been more important.

What’s also important is thinking about who we trust to lead us out of this moment and into a prosperous future. In my view, that means voting for political parties that are willing to reform our tax system to help people thrive and the planet flourish.

Taxes are a highly efficient way of pooling our collective resources to fund public projects and services that benefit all of us. They fund schools, roads, trains, nurses, mental health workers, teachers, public housing, income support, conservation, superannuation, national parks, kindergartens, recycling, sewage treatment – the list goes on. Without tax, we would have to try and buy these things as individuals. Can you imagine having to organise everything needed to run your local library, landfill, community law centre and hospital? Ain’t nobody got time for that.

Taxing land is great because land is already valued and, unlike other forms of wealth, people can’t hide it in the Caymans. A wealth tax makes sense because there is no good reason that one person should have $50 million in the bank while thousands of people sleep on the street. Rich people get richer just by being rich. We’re much better off taxing that accumulated wealth and sharing it around.

Taxes can also be used to support innovations that make all of our lives better. Every piece of technology that makes a smartphone smart – GPS, touch screens, the internet – was government-funded. Tesla’s battery technologies came out of a grant from the US Department of Energy. If people in government were to properly tax corporations like Google, Facebook and Apple – all of which got rich off the back of government innovations – then they’d have more pūtea to fund the next round of new ideas and we could all benefit once again.

Closer to home, Callaghan Innovation, which is majority government-funded, has helped Kiwi businesses to develop technology that extracts gold from e-waste, kanuka honey-based products that treat cold sores, acne, muscle and joint pain, and new food processes that turn bread waste into beer. Fisher & Paykel Healthcare make medical devices that have helped 14 million patients in 120 countries. They benefit from government grants and we benefit from their life-saving innovations – everyone wins.

In the world of arts, almost every homegrown musician, director or producer has at one time or another had a government grant. Would we still have all of the incredible films that Taika Waititi has made if it weren’t for the now-defunct artist benefit PACE? I think not.

Here in New Zealand, most of the people who own $50 million or more, declare less than $70,000 per year in income. The wealthiest 1% of people own $6.2 million each and squirrel half of it in trusts to avoid paying tax. Given that most wealth in this country is built off stolen land, worker exploitation, and extracting money from rent or interest, we can and must do better than this. There are people with private yachts and $200,000 cars and people that are working 60 hours a week and struggling to feed their kids. Our economy is off-balance and the people we elect into the next government have a once-in-a-generation opportunity to fix it.

As we think ahead as to how we emerge from this crisis, it is worth taking a look back. After the second world war, there was a period that historians call The Golden Age of Capitalism. From 1953 to 1961, the United States experienced remarkable growth and innovation, developing new technologies such as nylon and Teflon, and making significant gains in the automotive industry. At the time, the top marginal tax rate was 91%, and the top estate tax was over 70%. President Eisenhower used that additional revenue to expand Social Security, establish the Department of Health, Education, and Welfare, fund the largest public works project in US history and increase the minimum wage. In other words, he taxed high, spent large and people were better off for it.

Here in Aotearoa, we might look to what helped us out of the Great Depression. From 1935 to 1940, Michael Joseph Savage introduced welfare, free health care and universal superannuation. The Reserve Bank was brought under government control and the money printer went brrr. Income tax was 42.9% and 57% for unearned income such as rent, interest or dividends. Savage used those funds to start construction on thousands of state homes which created more jobs and places for people to live.

Sharing wealth is how we share care and responsibility for this land and all of the people in it. Tax is one of the best tools that we have for designing an economic system that provides for everyone. It’s how we can guarantee everyone has a decent income, warm home and good health.

In these precarious times, I hope that we choose to vote to care for each other.

*I do not love GST which is unfair to people on low-incomes and should be abolished.