A year on from the first Covid-19 lockdown, researchers analysed the ‘first season’ of the daily press conferences. Dr Alex Beattie and Associate Professor Rebecca Priestley explain their findings.

Today marks one year since Jacinda Ardern announced a nationwide lockdown. On March 23 2020, Ardern declared an immediate move to alert level three and gave us 48 hours to prepare for alert level four. Over the weeks that followed, many of us tuned in to the 1pm daily briefings to watch the prime minister and the director general of health, Ashley Bloomfield, provide updates about Covid-19 and the government’s response to the pandemic.

Media pundits and academics have been generally positive about the government’s Covid-19 communications. The communication strategy has been called a “masterclass”, Ardern has been described as an exceptional crisis leader, and Bloomfield referred to as an “extremely competent [and] somewhat boring civil servant who has New Zealanders’ hearts aflutter”.

Were the briefings boring? Not according to viewers. In an era of Netflix and binge-watching, the daily briefings were a return to event TV. Fans reviewed the briefings on IMDB.com as if Ardern and Bloomfield were stars in a hit series. Other weird and wonderful fandom emerged in the form of Curve Crusher tote bags, and YouTube “chill” tracks mixing Bloomfield’s announcements with lo-fi instrumental beats. 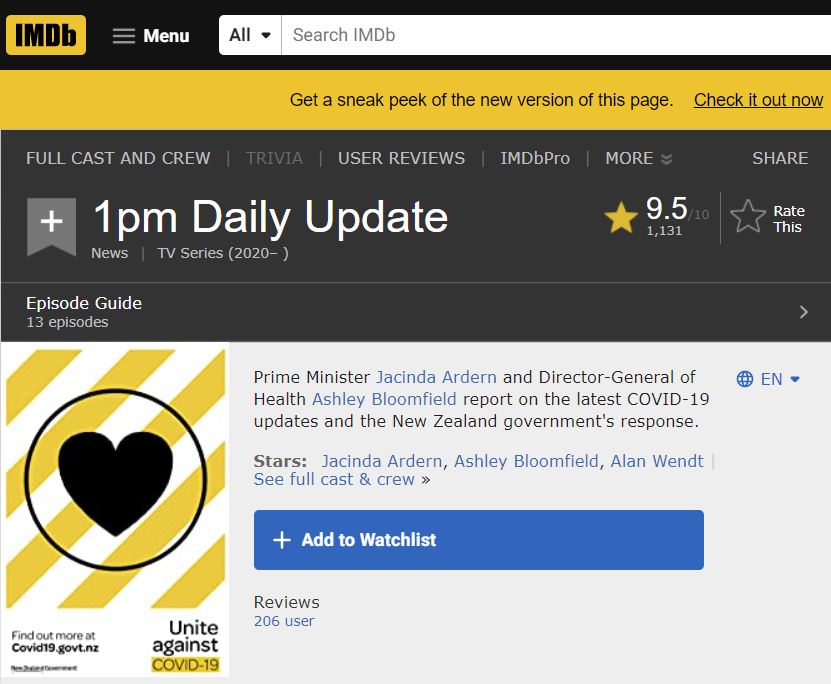 Yet, the government’s communications did not resonate with everyone. Māori public health experts have called the briefings “an exercise in whiteness” due to a lack of Māori speakers and a missed opportunity to demonstrate Te Tiriti o Waitangi partnership.

More recently, there are signs that the team of five million is fractured and fatigued. Following the February 2021 cases of Covid-19 in Papatoetoe, there were reports of growing public resentment towards individuals who do not self-isolate and calls by National MPs to punish rule-breakers.

Over the last few months, researchers from the Centre for Science in Society, at Te Herenga Waka – Victoria University of Wellington, have been studying the daily briefings to try and determine what role they played in communicating the risks of Covid-19 and encouraging our “team of five million” to support the government’s public health measures. We’re part of the wider Te Pūnaha Matatini team working on epidemic modelling and Covid-19 disinformation, supported by funding from the Ministry of Business, Innovation and Employment.

So, we re-watched the “first season” of the daily briefings, which took place between March and May 2020. We focused on the voices of Ardern and Bloomfield, studying the transcripts of their speeches, and used thematic analysis to identify different themes in the briefings. 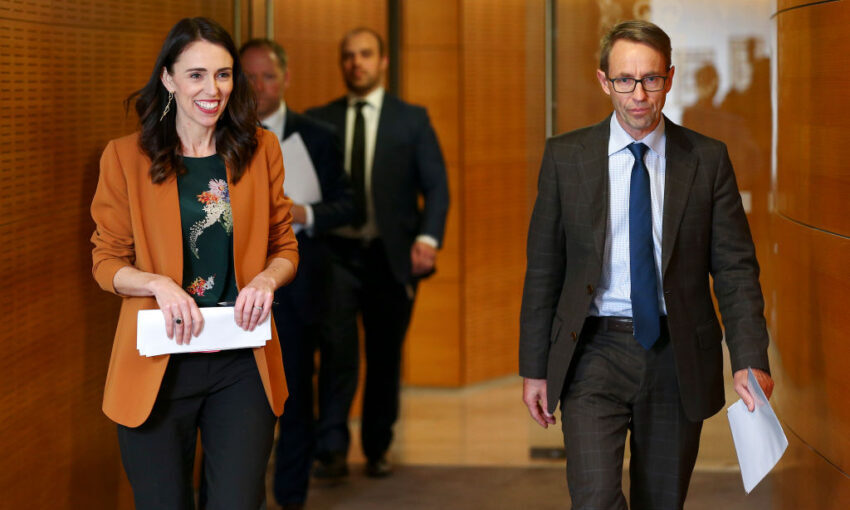 Communications in the daily briefings were generally open, honest and transparent. Bloomfield routinely conveyed case numbers, facts and figures about aspects of the response such as PPE and testing stations, and advice on where to go for more information. Both Ardern and Bloomfield stressed the seriousness of the threat posed by Covid-19, were open about government decision-making processes, and acknowledged the uncertainty surrounding the pandemic.

Honest and direct communication is critical during a crisis, when uncertainty is high. During the early stages of lockdown, there were widespread stories of panic-buying, a palpable fear of community transmission, and everyday anxieties on how to remain socially distant in narrow spaces such as footpaths and supermarket aisles. According to communication experts, during a crisis people look for information that can bring a sense of order, reduce uncertainty and create a greater sense of control. The daily briefings became Aotearoa New Zealand’s trusted source of information, offering viewers a sense of order by delivering information that was free of journalistic editorialising or sensationalism – in contrast to the television news, online or print media.

There is also evidence that open government communication increases public trust and positive attitudes towards Covid-19 public health measures. Both Ardern and Bloomfield explained protocols and lockdown requirements at length, were up front when they lacked information and admitted when they did not know the answer to a question.

But the daily briefings may not have developed trust with all New Zealanders equally. For groups that have a tenuous relationship with government – such as Māori, where there are historical low levels of trust with government because of colonisation – direct communication is unlikely to be sufficient to create trust. Instead, there is a need for a more specific communication strategy that decentres Pākehā and recognises the informational and psychological needs of broader categories of New Zealanders. One year out, there is still no communications strategy focused on Māori.

Lockdown was framed as an urgent, meaningful and collective cause

Our response to Covid-19 was repeatedly characterised as “going hard and going early”. Language used in the daily briefings often encouraged specific behavioural change: during the lockdown we were asked to “break the chain” of community transmission 23 times, and to “stay [at] home” 47 times. Another distinctive aspect of the language was Ardern’s use of military and sporting analogies. Ardern compared the government’s health measures to a “weapon” and mentioned the word “fight” or “fighting” 25 times in phrases such as “the fight against Covid-19”. The numerous sporting references focussed on team sports, mountaineering and marathon running. On 13 April, halfway through alert level four, Ardern compared the social distancing efforts of New Zealanders to both a race and the first half of a sports fixture:

We’re coming around the bend but we can’t quite see the finish line, but our job this week remains the same and as important as ever. … As the minister for sport recently said to me, “We can’t squander a strong half-time lead by letting up or getting overly confident.”

On May 7, by which time many New Zealanders were experiencing lockdown fatigue, Ardern compared the collective effort to a mountaineering expedition:

If we think of ourselves as halfway down Everest, I think it’s clear that no one wants to hike back up that peak. The descent is known to be even more dangerous, and so we need to proceed with caution … and to look after one another on the way.

Ardern’s liberal use of team sports, mountaineering and marathon references framed the lockdown, which was essentially a passive activity – “stay home and save lives” – as an active measure, involving all New Zealanders, in the fight against Covid-19. New Zealanders were encouraged to see their support for lockdown measures as doing their part in the team, and as something acknowledged as physically challenging. Furthermore, framing the lockdown as “going hard” both informalised the stringent measures that were expected of residents and positioned Ardern and Bloomfield as sports coaches motivating their “team of five million”. “Going hard and early” asked New Zealanders to work hard on social distancing measures and contrasted with the communications of international leaders, who negatively framed or undermined their own lockdown measures. On March 16, for example, when introducing the first set of lockdown protocols in the UK, Boris Johnson described the lockdown as a “very draconian measure”.

While the use of military and sports metaphors gave the lockdown an extra pep, there was a downside. Military and sports metaphors can create a sense of urgency, but can also encourage an “us versus them” mentality, where blame is attributed to specific actors or definable groups, particularly those perceived as “outsiders”. While a recent study claims that Chinese and Asian people in Aotearoa experienced lower levels of prejudice than in other countries during the pandemic, residents quarantining after travel from Pakistan and India have been stigmatised, including by former National MP Hamish Walker, and Māori and Pasifika communities have been subject to abuse on social media.

Yet, the overarching message in the daily briefings was that the enemy was not other people, it was the virus itself. Ardern made 19 explicit references to kindness or “being kind” and we were frequently reminded that “staying [at] home” and social distancing were protecting vulnerable New Zealanders. Ardern told emotionally laden stories about anxious parents and children with compromised immunity to demonstrate the positive impact of New Zealanders complying with public health measures.

In announcing the lockdown, Ardern declared that “government will do all it can to protect you. Now I’m asking you to do everything you can to protect us all.” This phrase, and sentiment, suggests a relationship of care between government and citizens, and between citizens. Ardern’s numerous expressions of care meant that the daily briefings provided more than simple knowledge transfer or dissemination of information – instead they worked to engage audiences by appealing to shared values, and social and cultural norms, and to acknowledge the diversity of New Zealanders’ experiences of, and concerns about, the Covid-19 lockdown.

Playing the long game against Covid-19

With the Covid-19 pandemic still in play, it is vital that we know how to play the long game against the virus. We found that the daily briefings galvanised the country because the open and direct communication, motivational language and expressions of care developed trust with audiences and conveyed the lockdown as urgent and meaningful. However, the daily briefings insufficiently met the needs of non-Pākehā and at times, encouraged blame culture. Blame culture can be linked to the liberal use of sports and military metaphors that we analysed in the daily briefings, which can construct rule-breakers, or those that are perceived as outside of the team, as the enemy.

However, rather than discarding the sports metaphor, we suggest that the team of five million needs a pep talk. A pep talk that is honest, motivational and expresses care, and in addition considers whose voices are represented and spoken for.

If a team is “only as strong as its weakest link”, then the team of five million will only ever be as strong as its rule-breakers. But the key is to admonish the rule-breakers without alienating them. Besides, unlike most sports, there is no sin bin for infringing public health measures. When tackling Covid-19, there is no place where people can be temporarily taken out of the game. This game is pervasive, and therefore the goal should not be to shame or punish rule breakers, but to encourage cooperation. To win the fight against Covid-19 the entire team of five million must play.

This post was updated on April 8 to correct some minor numerical errors.