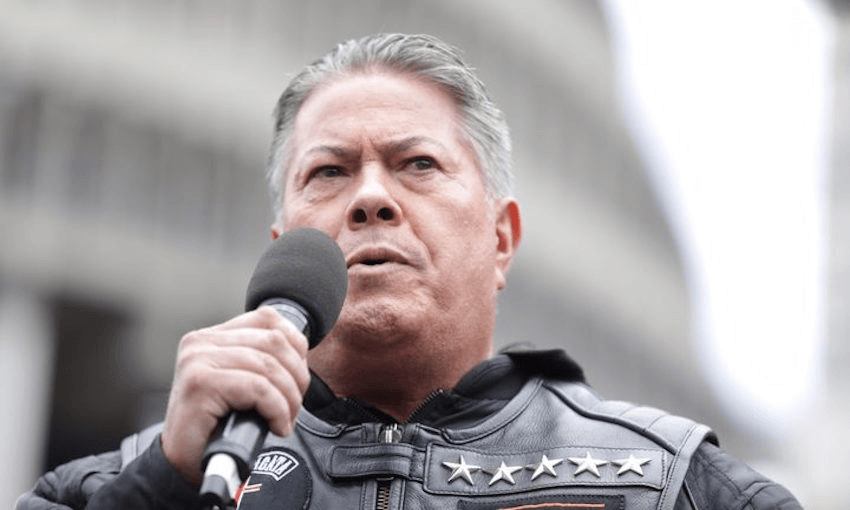 We love you, Brian Tamaki

The launch of a party fronted by Destiny Church leaders was a media event to remember. Alex Braae was there.

Somewhere along their journey through the public eye, Hannah and Brian Tamaki got the idea that the media hates them and their church. They have never been more wrong about anything.

From the moment Destiny Church members stormed down Lambton Quay chanting Enough is Enough, Brian Tamaki has been among the most bankable media figures in the country. No matter what he says or does, you know that if there’s coverage it will be polarising, controversial, dramatic.

It could be about his bizarre views connecting earthquakes and homosexuality, or his demands that his rehabilitation programme for prisoners get government backing despite never filing an application with the Department of Corrections. No matter the level of seriousness with which any reasonable person should take his pronouncements, they reverberate through the media. People will send complaints, and write letters to the editor about it. Social media engagement will flood in.

So it was, with the launch of the new Destiny Church Party. Everyone was there. Lisa Owen from Checkpoint and Katie Bradford from TVNZ were hurling questions hard and fast. The Project’s Rhys Mathewson looked for comedic angles. Steve Braunias floated around looking for colour, and asking if God had spoken to the Tamaki family about this party. In all, there were more than 30 reporters, camera operators and producers there.

It was all taking place in an opulent room, at Destiny Church’s Wiri headquarters. The wooden floors were covered in lush Persian rugs, and the walls were lined with the heads of animals Bishop Tamaki himself had shot. The lectern was gleaming metal, much shinier than what politicians normally stand behind. Clearly, the blessings of the Lord have rained down upon Destiny Church.

Apparently, though, it’s not actually a Destiny Church party at all. They insisted it wouldn’t be funded by donations from church members. They’re calling themselves Coalition NZ, and it will be led by Hannah Tamaki, not Brian. His passion, she explained, is to oversee the church. It seemed unlikely that he would even be a candidate for the party, though they’re not talking about who will stand in which seats yet.

Jeremy Wells from Seven Sharp took this tack, trying to get a rise out of the Bishop by escalating his titles with an arched eyebrow. But the plan came unstuck when “Your Grace” was asked about the capital gains tax, and gave an answer about relieved small business owners that was entirely uncontroversial and boring.

Do they even have a proverbial snowball’s hope of getting elected? Hannah Tamaki pitched Coalition NZ as a party that wasn’t about Destiny Church, and insisted it wasn’t even a Christian party, though she did make it clear they were standing on Christian values. She believes that the goal of the 5% threshold is possible, as even those who aren’t believers could be tempted to vote for the party, such is the disgust the so-called “silent majority” have for the current government.

She also magnanimously stretched out olive branches to both National MP Alfred Ngaro, who is considering setting up a Christian values party too, and to the New Conservative party. They’d be more than welcome to join Coalition NZ, she said, offering Ngaro the chance to come and sit next to her. Perhaps even former Mana leader Hone Harawira could be convinced to run for the party in Te Tai Tokerau, the Bishop hinted, though nothing had been confirmed there yet.

The chances of such a party getting above 5% are, of course, minuscule. A previous iteration of Destiny Church’s political ambitions garnered 0.61% of the vote back in 2005, and that was just after the massive rallies against the Civil Union bill. Now they’re trying to present themselves as being a movement for more than just Destiny, despite all four people fronting the press conference being intimately involved in the church. Many avowed Christians despise Destiny, believing they adhere to a twisted version of the prosperity gospel. Many New Zealanders generally just think Brian is a bit of a dick. And history clearly shows that minor parties universally fail to win seats if they don’t already have an MP in place when they’re formed.

So what were we all doing there? There’s plenty of news around today. The government made a big announcement on changes to their Budget Responsibility Rules, there are strikes on, there’s big news out of the kiwifruit industry, the British government could fall, climate change continues and so on.

But all of that shit is boring, compared to the absolute scenes of a press conference at Destiny Church. We won’t be chill about this, and we won’t keep this in proportion. You’re going to keep hearing all about Hannah Tamaki’s extreme stance against abortion, or hear Brian fling barbs at the Corrections minister, whether you want to or not.

The truth is, we love Destiny Church and the Tamaki family. We need them on our platforms. The Tamaki family are the perfect modern media talent, just as CNN found Donald Trump was pure media talent when he was just another candidate in a crowded primary field.