Successive governments have neglected families with disabilities – with appalling results

Here’s a fact to change the conversation: more than half of the New Zealand children in material hardship, 53%, live in a household with at least one disabled person (data crunch hat-tip: CCS Disability Action). Is this what kindness looks like?

While these are the first such official stats available for families with disabilities, any policy-maker who claims to have had no idea they were shirking responsibilities is disingenuous. In 2016, for example, CPAG published research showing that in the predominantly Pacific, low-income Auckland suburb of Otara four out of every five households with children with a disability or chronic health condition were unfamiliar with the child disability allowance and/or unaware that they could receive assistance from Work and Income at all. The system – of disability support and, in fact, of all income support –  is largely monocultural (with racist consequences), piecemeal (designed to make people fall through the cracks) and inadequate even for those on low incomes who are receiving all their entitlements.

CPAG and CCS Disability Action published a report last year with policy recommendations to stop this dire discrimination against families with disabilities. Basically it boils down to: increase vital income support to those with disabilities and make sure everybody knows about it.

Material hardship – measured by going without several things such as (for example) meat, fresh veges, shoes, clothes, dental visits and/or insurance – affected fewer children in 2019/20 than previously. The overall rate went from 13.2% to 11% of all children, a reduction of around 24,000 from around 149,400 to 125,200 children in material hardship. Severe material hardship – measured by going without even more basics also decreased overall: from 64,600 to 53,000, or from 5.7% to 4.6% of children.

It looks likely (although it’s not definite) that rates of material hardship for Māori also reduced somewhat, although rates for Māori are still much higher than for children overall. (Because of the sample size, it’s more difficult to say what is happening for particular ethnicities.)

Any celebration is likely to be bittersweet, however. Data collection halted early, so reflects only the country up to the point that the Covid measures began. Yesterday’s information is already out of date. The prime minister’s officials warn that “the most severe negative effects [of Covid-19] are likely to be felt by those who are already disadvantaged.” And we have seen no robust plan of action with the resourcing required to stop these effects.

A different story for income poverty

While material hardship has reduced, not so income poverty. What explains this? While the Winter Energy Payment may have helped, we suspect it’s mostly exploding debt and mushrooming charity. People are getting out loans, and/or being forced to foodbanks to look after their families – because of government shirking their responsibility. In the three years to the March 2020 quarter – again, pre-Covid – hardship loans from MSD increased by over two-thirds, from $48 million to $89 million per quarter. That’s money that the government insists must be paid back.

None of the three “supplementary” after-housing-costs measures that the Child Poverty Action Group focuses on showed statistically significant changes. Overall, 168,000 children in 2019/20 (pre Covid) were still in severe income poverty. On these measures, the government’s 2018 Families Package – including increased family assistance and introducing the Winter Energy Payment – wasn’t enough to make a statistically significant difference. 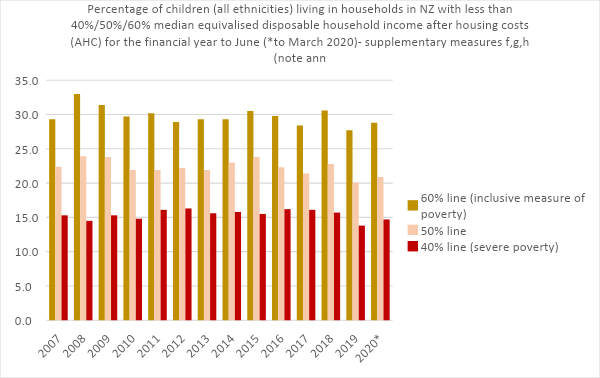 As Dr Keri Lawson-Te Aho, commenting from a Māori perspective for CPAG, put it:  “These statistics show entrenched, compounding inequities… In order to meet its Tiriti o Waitangi obligations, the government must re-prioritise, and have the reduction of poverty for tamariki Māori at the core of all its policies.”

We know what the solutions are

The government listens to public health experts about how to deal with the crisis of the pandemic – and at the start, that took guts and resources. We also need them to listen to experts – including Māori, Pacific and disability sector experts, and experts in lived experience  –  about how to deal with the crisis of poverty. This too will take guts and resources. Over 70 organisations and seven out of 10 New Zealanders are calling for immediate permanent increases in incomes for whānau and families on benefits. CPAG’s reason for doing so is that most children in severest poverty live in households which receive benefits, and typical incomes for families receiving benefits are below key poverty lines. The Welfare Expert Advisory Group had a reasonably useful set of recommendations in 2019, which, for the most part, the government keeps putting off doing anything about.

We need to see a robust, coherent, well-resourced plan. We need to see real and successful action, to ensure all communities – including Māori, Pacific and disability communities – have liveable incomes. We need to see that the government understands – just as our communities, our whānau, our parents, and yes, our children know – that “caring” is not all sweetness and light, but is often unglamorous, uncomfortable hard work.