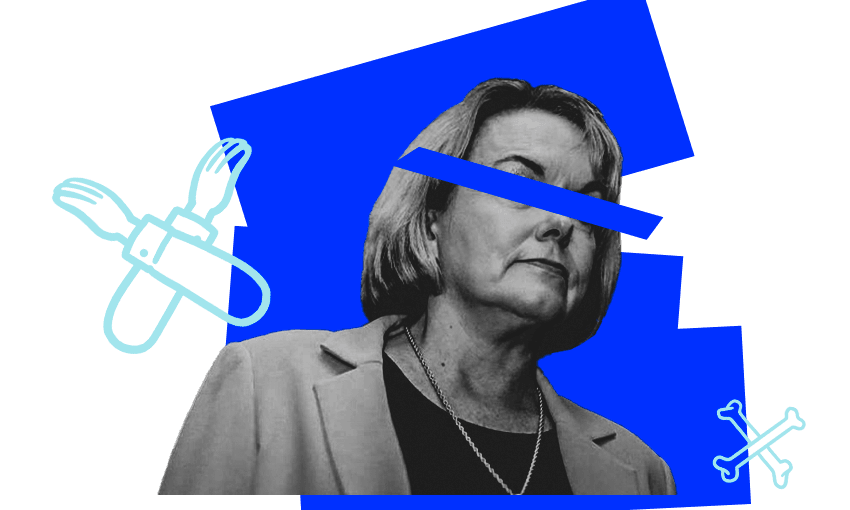 Blindsided by a late-night demotion of Simon Bridges, MPs have called time on Collins’ leadership, leaving Christopher Luxon and Mark Mitchell to battle it out.

Almost four hours after National MPs gathered for an emergency caucus meeting, the party has emerged to announce that Judith Collins’ turbulent 16-month leadership is over. Shane Reti, her deputy, will fill the role of interim leader while the party chooses her successor. Speaking to media at parliament this afternoon, Reti said caucus would elect a new leader at its meeting next Tuesday, November 30. He would not comment on initial reports that it would be a two-way contest between Auckland MPs Mark Mitchell and Christopher Luxon to become National’s fourth leader in two years.

The idea of a head-to-head appeared to be scotched shortly afterwards, when Simon Bridges said he was mulling an attempt to regain the position he held until he was jettisoned by Todd Muller in 2018. He told media that he would “consider it over the next day or two”.

The removal of Collins from the role she had so long coveted will leave a daunting challenge for her successor in rebuilding a party that is in tatters. Speaking to RNZ today, long-serving National Party pollster David Farrar said it was disastrous timing for National with Labour having recently dipped in popular support. “The public will not be in a forgiving mood,” he said. “I can’t recall a worse case of potential brand damage under MMP than the way this has played out.”

The latest chapter in National’s horror spell was sparked after 9pm last night, when Judith Collins, after weeks of consistently poor poll ratings, announced that former leader Simon Bridges had been demoted and stripped of his portfolios. The allegation was that Bridges, who had been widely reported to be preparing a fresh leadership challenge, was the subject of “an allegation of serious misconduct relating to [an] interaction with a caucus colleague”.

Collins’ statement concluded: “Members of parliament and staff should be able to conduct their duties at all times without feeling unsafe or intimidated, and all deserve to be treated with absolute respect by their colleagues in all situations.”

The colleague, it was subsequently reported, was MP Jacqui Dean, and the misconduct was a comment made in 2017, in which Bridges discussed potential sexual approaches to encourage the conception of a daughter. A complaint had been laid at the time to then leader Bill English, and Bridges had apologised, according to reports.

Bridges and other MPs sought to convene a late-night caucus meeting last night to address the allegations and the demotion, which had blindsided almost all of them. That was rejected, with MPs instead gathering at 9am, ahead of a scheduled 10am press conference, at which Collins had pledged to appear with Reti and Dean. That press conference never happened.

Instead, Reti appeared before press gallery journalists at 1pm. “The caucus was concerned with the content of the press release and the process by which it was issued,” said Reti. “Caucus moved a motion of no confidence in the leader and that motion was successful.”

He added: “There is always a sadness when something like this happens, but, you know, we get up and lift our eyes to the horizon and get on with our work.”

Arriving at parliament this morning, Bridges told media: “What we saw yesterday was truly desperate stuff from Judith Collins. I think it shows that she’ll go to any length to hold on to her leadership of the National Party.”

Speaking to media after the caucus meeting, Bridges appeared to be eyeing up an attempt to regain the leadership. “I’m going to consider it. I’m older and a bit wiser, I think I have a sense of what New Zealand needs at this time,” he said.

He declined to repeat the offending remarks of 2017, but said media reports were “on the money”. Of Dean’s response, he said: “I share her desire for a modern, inclusive workplace and environment and today I’ve again offered my apology for what happened several years ago.”

It is unclear whether other potential runners, such as Chris Bishop, Nicola Willis, or Reti himself might throw their hats in the ring, and Luxon and Mitchell have yet to confirm their candidacy. Elected for the first time last year, Luxon is a former CEO of Air New Zealand and a protege of three-term prime minister Sir John Key. His ambitions to become prime minister are no secret, but he had been widely expected to be keeping his powder dry and gathering experience at least until 2023.

As National MPs survey the damage, questions will also surround the future of long-serving party president Peter Goodfellow. His position was already under threat over candidate selection shortcomings and a serious dip in fundraising. With Collins claiming she had unanimous board support in taking action against Bridges, his role in the episode will come under scrutiny.

In a series of tweets, Collins wrote today: “I am pleased to say that I am just the MP for Papakura again. It’s been a privilege to take over the leadership of the NZ National Party during the worst of times and to do so for 16 months. It has taken huge stamina and resolve, & has been particularly difficult because of a variety of factors.”

She continued: “I knew when I was confided in by a female colleague regarding her allegation of serious misconduct against a senior colleague, that I would likely lose the leadership by taking the matter so seriously. If I hadn’t, then I felt that I wouldn’t deserve the role. I didn’t ask for the allegation to be given to me. I am proud of the support I received from Dr Shane Reti, a man of principle, and I will continue to advocate, not only for Papakura, but for those who have no voice. A big thank you to the wonderful staff in the National Leader’s Office, my Papakura Office, National Party members & my wonderful colleagues. I’m so pleased that I can spend more time with my family & friends & I will not miss the gruelling media schedule.”

In a statement, Jacqui Dean confirmed that Bridges’ remarks were “not about me”, though they she considered them “inappropriate and not something I wanted to hear”.

She added: “At the time there was an apology, but subsequently it has continued to play on my mind and with the recent reviews that have occurred in parliament the feelings have been brought back up. What matters to me is that all of us have a clear understanding of what behaviour we should expect in a modern workplace environment. Simon and I have spoken a number of times over the past few hours and he has reiterated his apology. As I’m sure can be appreciated, the publicity around this has been upsetting and I ask that my privacy is respected on this.”

Pressure on Collins had been unrelenting over most of the course of her time as leader. Janet Wilson, Collins’ press chief during the election, told Spinoff podcast The Fold in September that she had become “consumed”. She added: “She prizes loyalty above all else. But then her ugly stepsister, paranoia, steps in, and she has these almost paranoid storms.”

Wilson’s comments were prompted by Collins’ attacks on science communicator Siouxsie Wiles. “I think Friday’s speech to the National Sāmoan Group on Siouxsie Wiles was completely unacceptable for a National party leader. Completely unacceptable. The fact that she is still working her bag of tricks with the likes of Cameron Slater shows us that she’s learnt nothing since 2014,” said Wilson.