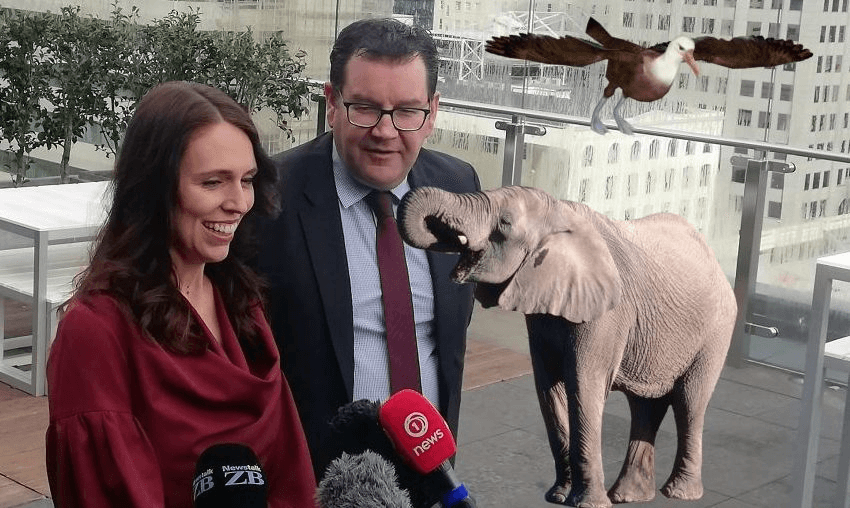 With business confidence having plunged, the prime minister’s goal this morning was to get the big beasts back onside. Did her speech, and her announcement of a new advisory council, do the trick? Toby Manhire went along to the breakfast to find out.

Jacinda Ardern has talked a lot about elephants and rooms lately. In a pre-budget speech in May she noted that business confidence surveys were “the elephant in the room and I’m quite happy to point that out.” Three months earlier at a Westpac business breakfast she said, “I should really name the elephant in the room, and that is the business confidence surveys.”

Back at Westpac’s HQ in downtown Auckland for another breakfast charm offensive this morning, the prime minister was introduced by the bank’s CEO David McLean. He was sceptical about the import of business confidence surveys, but Ardern herself had, he reminded us, called them the elephant in the room.

The badly housed elephant has been talked out of existence. So Ardern chose an alternative.

“It is not the elephant in the room,” she said shortly after eight this morning to a crowd of 120-odd business types. “It’s a flashing great neon sign with giant lights and fireworks going off behind it. We are all talking about it, and there is nothing wrong with that.”

A less glittering, but more apt description might have been to call the dismal business confidence metric an albatross around the government’s neck. Labour led governments have routinely been bashed by business on the confidence question, and even if it’s about as useful as a horoscope, it still carries symbolic weight.

The fiscal straitjacket that Labour and the Greens zipped themselves into before the last election was all about symbolising that they weren’t about to kneecap the status quo. The “fiscal hole” chalked out by Steven Joyce during the campaign was an attempt to press the nerve around perceptions of Labour’s “economic integrity” – that’s how Jacinda Ardern put it when she raised the issue during a leaders’ debate. That night she called it “the elephant in the room”.

The speech itself was an act of symbolism. It had been trailed as a “major speech”. Early in the address itself Ardern wanted to remind the audience that “this speech was the first thing I announced the day I returned to work”. When Helen Clark and Michael Cullen found themselves in the New Zealand edition of a “winter of discontent” in 2000, they sought to demonstratively mollify businesses and their pointed expressions of low-confidence by hosting a “summit”; there was an echo of that on the ninth floor of the Westpac HQ this morning.

Aside from stressing ad infinitum the “certainty” the government undertook to deliver, Ardern announced the establishment of a Business Advisory Council, a new body that would provide a “formal advice stream” to the prime minister. Definitely, absolutely, certainly, cross-my-heart-and-hope-to-die this is not a working group, said the prime minister afterwards – this posse of 10-15-ish people, chaired by Air NZ CEO Christopher Luxon, would provide an ongoing funnel of feedback and counsel from business to the Beehive.

There is of course something fairly hilarious about the creation of an advisory group for big business. If you’re searching for underrepresented voices who go unheard in the corridors of power, who lack the resource and networks to put their case in policy making, big business is probably not going top of the list. But that just underscores the symbolism in all of this. The words written on Jacinda Ardern’s flashing great neon sign with giant lights and fireworks going off behind it this morning were We promise you we are listening.

How did the message go down? The audience was strangely muted, with only one, friendly question coming from the audience, something unimaginable for a John Key appearance among the same crowd. “I think it’s just that we ran out of time,” reckoned Ardern afterwards. “I don’t take it as indicative.”

The response from Business NZ would have been encouraging. In a release its head, Kirk Hope, accepted the olive branch, hoping the government would “take heed of its concerns about the lack of clarity around policy and reform, in particular in the area of employment relations”. Ardern can be grateful, at least, that she doesn’t have the antagonists of Clark and Cullen 18 years ago, when the Business Roundtable, led by Roger Kerr, was implacable and everywhere.

Beyond the business confidence number, there are more substantial challenges this government and New Zealand businesses face, reflected in much more reliable bellwethers. Ardern refused to predict whether the announcement will shift the confidence number, but she’s probably done enough to shake something of that albatross. The PM signed off her speech this morning with a twist on a familiar mantra – Let’s Do This reorganised by an internal working group, perhaps. “Now,” she told the business elite, “let’s get on with it.”