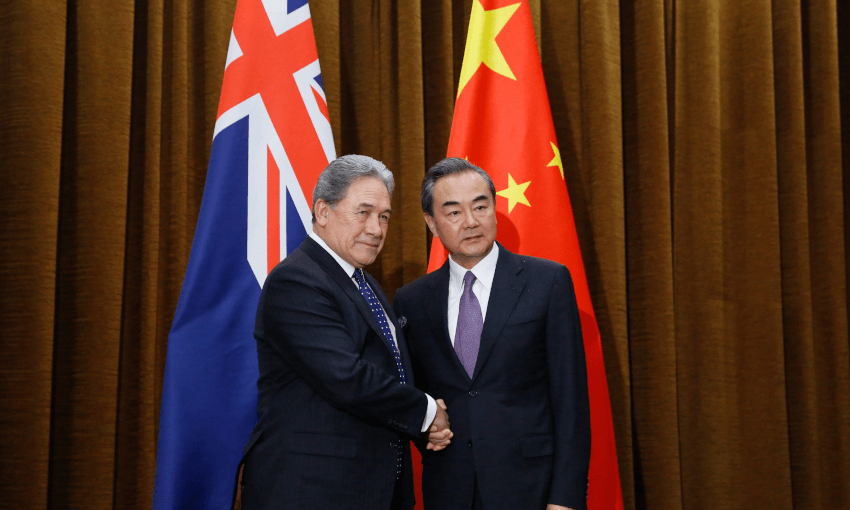 New Zealand wants to be a ‘bridge’ to China? Careful we don’t get walked over

When it comes to tension between the US and China, National and Labour are on the same side – the fence. Guyon Espiner examines a foreign policy that tries to have it both ways.

We have the Five Eyes alliance with the US but have no free trade agreement with them. We have the FTA with China but little engagement on security and intelligence.

Rather than scurrying away as the elephants stomp, Trade Minister David Parker wants his country in the middle of the fight, saying New Zealand could be a “bridge” between the two countries.

Prime Minister Jacinda Ardern hasn’t been able to fully explain how we might fulfil this role but both she and Mr Parker will be hoping for signs of a ceasefire later this week, as China and the US meet at the G20.

With billions of dollars of tariffs fired off in a trade war, Presidents Donald Trump and Xi Jinping meet in Buenos Aires with the hope of a deal or at least a de-escalation.

Despite Mr Parker’s heroic talk of bridging the gap between the sparring super powers, it’s doubtful that assisting with this is within New Zealand’s sphere of influence.

It might be more productive for the government to focus on managing the issues directly at play between New Zealand and China. There are plenty of them and they’re gaining momentum.

A decision is imminent on whether to let Huawei roll out parts of New Zealand’s 5G network. The US is putting pressure on its allies to block the Chinese telco, citing security concerns. Or is it just trying to constrain China? Australia has sided with the US. GCSB Minister Andrew Little is going to upset one side whatever his decision.

And then there is the very curious case of Anne-Marie Brady. In September last year the Canterbury University academic published her paper Magic Weapons, claiming a campaign of corrupt and covert influence by China in New Zealand.

Since then she claims her office has been broken into twice, her home targeted in a suspicious burglary and also that her car may have been tampered with.

The government’s response has been to say as little as possible but that is becoming increasingly untenable.

This week 29 academics and authors wrote to Ms Ardern expressing alarm at the reports of intimidation and demanding assurances that attacks on academic freedom would not be tolerated.

Ms Ardern insists it’s a police matter and that the investigation continues. Prof Brady believes the police have actually finished their work and her supporters fear the government’s silence is a sign of weakness.

If indeed it can be shown that operatives in any way connected to the Chinese government were responsible for the actions Prof Brady describes then this will be a big challenge for the prime minister.

What does she do? How hard does she go? This comes at a time when talks to upgrade the FTA appear stalled. There’s plenty at stake. Two-way trade with China was $8.6 billion in 2007 when the pact was signed. It is now worth more than $26b.

While the public here may demand a strong response to any proof of intimidation, China will not take kindly to a scalding from New Zealand. Back in July when the government’s Strategic Defence Policy Statement was critical of China’s military build up in the South China sea, its diplomats were quick to register their displeasure.

Perhaps the cold shoulder is already being offered. Mr Parker was unable to secure a meeting with his counterpart, China’s Commerce Minister Zhong Shan, during a recent visit to Shanghai. Ms Ardern, invited to China a year ago, had expected to visit this year. But now the trip is off. “All capitals are busy approaching the end of the year and Beijing is no exception,” she explained.

If ‘we’re too busy to meet you’ sounds like a snub then perhaps it is.