What does it look like when commissioners appointed in place of a council have to face the public? Alex Braae went to Tauranga to watch the quartet make their pitch to the local business elite.

In a flash hotel function room overlooking the harbour, Tauranga’s business elite heard why democracy had to be stopped, for the people’s own good.

This morning’s event was hosted by the local Chamber of Commerce, and was the first public appearance by the four new appointed commissioners since Tauranga’s elected council was sacked by the government at the end of last year. The commission chair, long-serving former MP Anne Tolley, said their mandate was to make the sort of tough choices that councillors either wouldn’t or couldn’t.

While it wasn’t a gathering of suits, it was clearly a well-heeled crowd who tucked into plates of bacon and hash browns this morning. The breakfast didn’t appear to include any kiwifruit, the region’s main cash crop, however. Perhaps they haven’t been harvested yet, or perhaps they’ve all already been exported through the port that provides Tauranga’s main economic base.

The case for commissioners was set out by Chamber of Commerce CEO and host Matt Cowley, who praised local government minister Nanaia Mahuta for her selection of commissioners. Criticisms had been levelled at councillors that they didn’t have the expertise to handle Tauranga’s issues. That can’t really be said about Anne Tolley’s gang of four.

The problems Tauranga faces are not just political, even if they dominated much of the media coverage of the term. Former mayor Tenby Powell spent his time in office fighting increasingly bitter running battles with a group of councillors, with personal insults and code of conduct claims flying back and forth.

Rapid growth has also strained Tauranga’s ability to function as a city and there is now a major infrastructure deficit, particularly when it comes to the requirements for new housing developments.

This morning Tolley said that before being appointed to the commission, she “thought she had retired”, not just from central government, but from politics altogether. The former East Coast MP set out out the importance of Tauranga to her former patch. The city was the “heart” of the Bay of Plenty, she said.


“On arriving here, we found that it’s arteries were pretty clogged, and it needed defibrillating.”

The previous era of infighting was over, she said. “You will never see us in public disagreeing with each other, because that’s not what good governance does.”


The hits against the former councillors kept coming throughout the morning. Tolley spent most of her introduction setting out the case for why the commissioners were brought in, describing the situation as “the worst governance” she had ever seen in her decades in politics.

Tolley made it very clear that none of the commissioners hoped to be elected next year. Like a general in a country taken over by a military junta, Tolley defended the suspension of democracy as necessary, but temporary. She did however admit to reorganising the furniture in the council chambers. 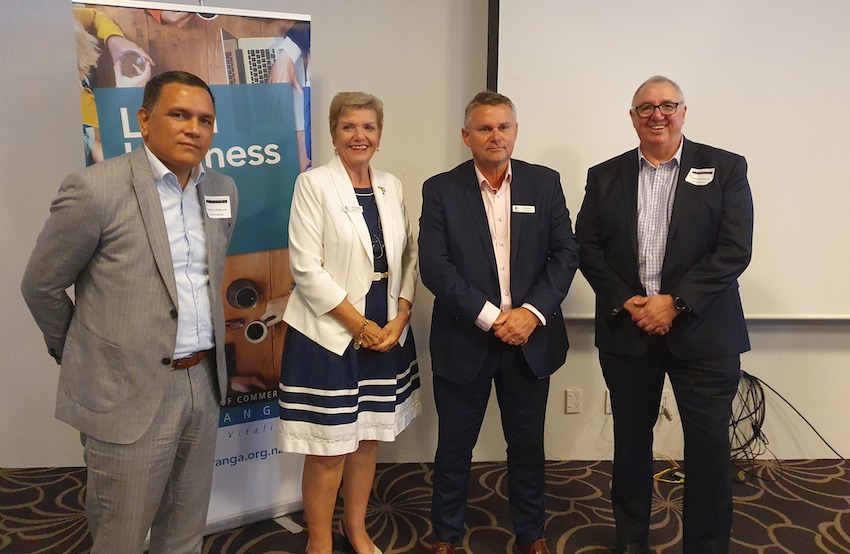 One ousted councillor who was in the room to hear what they had to say was Kelvin Clout, who still has the right to call himself a councillor and intends to run again in 2022. He was not in favour of commissioners being appointed, but accepted that there was no point in re-litigating that decision now. He also described the commissioners as “top quality people”. But the commissioners repeatedly implied that they didn’t want to see the same council be re-elected next time. Did the criticism of the previous council sting at all?

“What they were trying to subtly say is that if there’s any decent businesspeople in the room who might want to put their hand up, do it. I think the only issue with that is that it’s not exactly a plum job, becoming a councillor.”

In the immediate term, the commissioners don’t need to win over the voters to be considered legitimate – and after all, only 40% of the city actually cast a ballot at the last local body election. But they do appear to need business leaders to get onside right away. The role of the business community was talked up constantly, both now and into the future after elections return. And the commissioners need money for what they intend to do, in a city that has long had fairly low council rates – a political decision made by the voters.

One option is an increase to the differential between residential and commercial rates. Currently businesses effectively pay $1.20 for every dollar put in by residents. That’s lower than many other parts of the country. Clout noted the differential is likely to go up to closer to $1.60.

“The rubber hits the road when the long term plan goes out for consultation, and when people see the impact on their rates,” he said.


When asked by the Bay of Plenty Times about the differential, Tolley said “one of the jobs we’ve been doing through the development of the LTP [long-term plan] is looking to make sure that the costs of the city… is shared amongst all the contributors. And the commercial rate is tax neutral – they’re able to claim their rates as a tax expense.

“In the end, everyone has to take some of the pain that we’re having to inflict because of the lack of decision-making over the last few years.”

Tauranga has largely been funded by rates and debt, but is now coming up against the limits of its debt ceiling. Could some of that pain involve privatisation, or the selling off of assets? “There’s not much left to sell,” said Tolley, slightly ruefully. “The assets that are left, we want to make the best use of.”

Discussions throughout the event flirted around a more philosophical question about how the country is run: what exactly is the point of elected councillors? And if commissioners have to be brought in to make decisions that are deemed necessary, why not just have them be in charge all the time?

Tolley argued that the job of councillors – and her team of commissioners, by extension – was governance, not operations. The council, she said, is a “complex, multi-billion dollar business”. They need to be thinking at a strategic level and making decisions, rather than getting involved in “potholes” – both literal and figurative.

But many voters expect their councillors to be the people they can call to get a pothole fixed. It’s a truism that most people primarily engage with local government much more than central government, but that’s because the sort of problems people tend to need sorting out in day to day life are more likely to be within local government’s remit.

Seen through that lens, the Tauranga commissioners are a significant experiment in the future of local government. Big questions are being asked about whether the entire sector is fit for purpose, whether more centralisation is needed, and whether there are better ways of running on-the-ground services.

If the business community gets on board, it will make the commissioners’ job over the next 18 months much easier. But there’s a troubling idea implicit in this move – one that should give even the most enthusiastic backers pause for thought, because it is an idea that should be abhorrent in a democracy: that when the people vote the wrong way, the will of the people can be overruled.