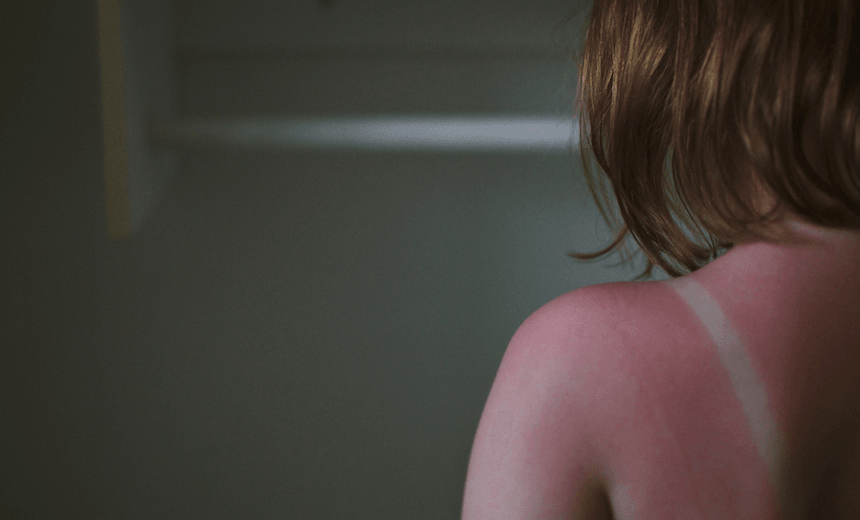 Back view of woman against sun burns on her back.

About that Stuff story on ‘edible sunblock’

Back view of woman against sun burns on her back.

I have a mental checklist of bits of my body I must not forget to put sunscreen on. The back of my neck, the tops of my ears, under my chin, the backs of my knees… Each one comes with its own painful memory of the time I forgot and regretted not being more thorough.

One place I still consistently fail to apply sunscreen is the inside of my stomach. But I can now relax: edible sunscreen is here!

Stuff published an article yesterday morning about a new supplement from GO Healthy called “Go Sun UV Protect”, which is apparently the “first of the so-called ‘edible sunscreen’ products to hit the New Zealand market”.

“Advantages of sun protection you swallow are that it lasts for 24 hours, is not affected by water or sweat, and protects all parts of the body”

Sounds pretty good, right? And the nice big picture of the packaging in the article has “Clinically Researched NutroxSun™” written on it so it’s evidence-based, right?

Well, I have to say I’m not convinced. And only partly because of the misleading advertising of GO Healthy products I’ve seen in the past.

While it does note Cancer Society reservations, the Stuff article gives them equal billing alongside an “independent lab trial” that was apparently conducted on the pill’s main ingredient in 2015. Unfortunately, the article is incredibly light on details (I have a sneaking suspicion that the author may not have read the research), but here’s what it does say:

“An independent lab trial of NutroxSun in Italy in 2015 found the onset of sunburn was delayed by 30 percent after two months of daily use.”

After two months of daily use doesn’t sound like quite the same promise as “it lasts for 24 hours”. Frankly it sounds like an expensive waste of time compared with just putting sunscreen on and not taking the pill, but maybe that’s just me.

Anyway, after reading that there’s been a trial I did what I always do and went hunting for the study. Unfortunately, it doesn’t appear to have been published in a peer-reviewed scientific journal, which is frankly a pretty big red flag. Thanks to Thomas Lumley for pointing me to the promotional PDF published by the company that came up with the ingredient “NutroxSun”.

So, assuming this research’s results are reliable, if you take this pill every day for two months you can expect it to be like you’re wearing sunscreen with an SPF of about 1.3 or 1.4. For comparison, your naked skin is SPF 1 and the Cancer Society recommends using sunscreen with SPF of at least 30.

If you take a pill every day for two months (at a low, low price of around $73.80 for two 30 capsule bottles), then… well, you’ll still have to use sunscreen if you want to avoid sunburn. Just like you would if you hadn’t spent enough money to buy over a week’s worth of food on a bunch of pills you don’t need.

Interestingly, and despite the Stuff article saying otherwise, this isn’t the first time the idea of “edible sunscreen” has come to the melanoma capital of the world. You might remember in 2014 when a bunch of news media were talking about “drinkable sunscreen” from a company called Osmosis Skincare. Their product, “Harmonized Water”, is just slightly less useful than Go Sun UV Protect, by virtue of it being plain old water.

I definitely remember when this happened, because I complained to both the Advertising Standards Authority and Medsafe about it. I’m a bit surprised Stuff doesn’t remember it too, given they wrote about it at the time.

The claim that this “is the first of the so-called ‘edible sunscreen’ products to hit the New Zealand market” has arrived with rather perfect timing. It came just the morning after I sent a three year follow-up email to Medsafe about the complaint I lodged in September 2014 regarding Osmosis Skincare’s “Harmonized Water” products. Because our current anti-quackery laws aren’t working.

I’ve also followed up with the Advertising Standards Authority, as it seems Osmosis Skincare has recently stopped complying with an upheld complaint I made against them in 2014.

So we won’t need to add “pop a pill” to our “slip, slop, slap, and wrap” mantra. If anything, this should be a reminder to be deeply sceptical of these sorts of health claims.