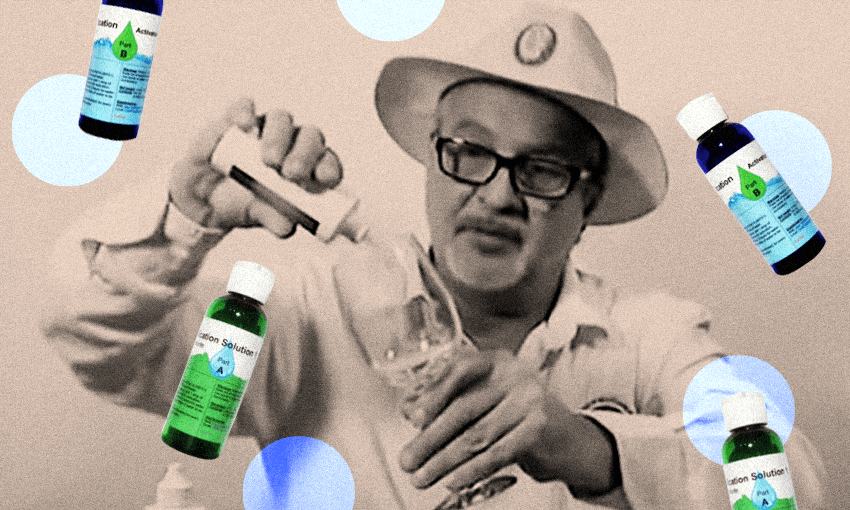 A group of US men behind the phony ‘church’ that profited from peddling the dangerous substance face criminal charges. A New Zealander with Covid was admitted to intensive care after taking the stuff. But a Waikato man just keeps promoting and selling it.

Despite the revelation that a Covid-positive patient was admitted to a New Zealand hospital intensive care unit after consuming a dangerous industrial bleach that is often branded as “Miracle Mineral Solution”, the product is still being promoted and sold by a New Zealand-based website. A site promoting MMS, and a linked site that retails it as a “water purification solution”, continue to operate even as Medsafe pursues a prosecution through the courts, the New Zealand medicines regulator has confirmed.

Miracle Mineral Solution – or MMS – contains high levels of sodium chlorite, typically found in textile bleaches or disinfectants. It gained notoriety when promoted and sold by self-styled archbishops of a sham church based in Florida who falsely claimed it could cure everything from cancer to HIV, autism to Parkinson’s – and, most recently, Covid-19. Members of the US family behind the product are currently facing criminal charges in the US.

Chris James, group manager of Medsafe NZ, told The Spinoff that the case involved a Covid-positive New Zealander who had “attempted to treat themselves with a water purification solution”. He said: “There is absolutely no evidence that these products are an effective treatment for Covid-19 or any other pathogens within the body. In fact, ingesting these products can cause dangerous and potentially life-threatening side effects, such as acute liver failure.”

The Medsafe advice is clear: “Do not buy or consume (drink) Miracle Mineral Solution products or associated products described as water purification solutions. Consuming these products is the same as drinking bleach. When consumed, these products can cause nausea, vomiting, diarrhoea and symptoms of severe dehydration. These may be life-threatening, and you should seek medical advice as soon as possible.”

A website with a .nz domain called “Miracle Mineral” that promotes the product states, “this website cannot and will not make any public claims that MMS ‘treats’ or ‘cures’ serious diseases or conditions”, before unleashing a series of false assertions about the product’s efficacy, while skating over the grave dangers of consuming it.

The site includes a denunciation of New Zealand’s “fake news mainstream media” and attacks science communicators. It features dozens of unevidenced “testimonies” ascribed to people who claim to have been “cured”, as well as lengthy instructions on how to mix and consume the product.

In 2020, forensic scientist Dr Ian Calhaem demonstrated for RNZ how sodium chlorite and hydrochloric acid, when prepared in accordance with the instructions on the New Zealand Miracle Mineral site, produced a substance “acidic enough to rust a steel bar within two hours of being immersed”.

While located on a .nz high-level domain, the site is registered to Mark Grenon, the American leader of the “Genesis II Church of Health and Healing”. Grenon, who leads the self-described “non-religious” organisation, is currently in Bogotá, Colombia, from where US federal authorities are seeking to extradite him to face charges in relation to the marketing and selling of MMS.

Grenon has a New Zealand associate, however. Roger Blake, who has described himself as a Genesis II Church “bishop”, told Newsroom in 2017 that he was involved in the MMS site. He said: “It’s sort of like a network where we all work together, the people over there might get an inquiry, they’ll forward an email onto me and ask if I can help and that sort of thing, we all work together and it’s a really good structure.”

Potential purchasers who visit the New Zealand MMS site today are sent to a “water precaution suppliers” site. That in turn directs anyone resident in New Zealand – as well as those in Sweden, Canada and the Philippines – to a water purifier products website in New Zealand. That site is registered to Blake, who runs the operation from his Ngatea Water Gardens business in Waikato.

Blake did not respond to invitations from The Spinoff to respond to questions. In 2020 he told RNZ that warnings of the dangers of the substance were “fake propaganda”, and that he consumed the product himself. Five years ago he said, “I haven’t had anyone say ‘this nearly killed me’ or anything. If it did I would drop it like a hot potato.”

The report of a patient being admitted to ICU after using the product does not appear to have shaken his belief. While website purchases are temporarily suspended “due to a fire on the premises”, they are welcomed via email. An inquiry sent yesterday prompted an enthusiastic reply and list of items for sale within three minutes.

The testimonies page on the Miracle Mineral site includes gushing reviews from people who have purchased the product at the Waikato premise as well as online. One describes attending a “two-day course in Ngatea” that was “so revealing and refreshing” that they felt “now armed with such that we have a solution to almost all health issues on the planet … Thank you, everyone, MMS family.”

Two years ago, Blake issued an appeal for donations after a July 2020 “incident”, which, he said, saw “10 officers arrive unannounced to our private residence and business locale”.  He said: “As all of my water purifier products have now been seized and removed, I am no longer able to supply your water treatment product needs until further notice. Further investigations are being conducted, and I have not been given a specified time of how long this investigation may take.”

Medsafe confirmed it was monitoring the company and pursuing legal action.

Chris James told The Spinoff the organisation is “extremely concerned with the misleading claims made about the product and has had enforcement actions under way for some time against Roger Blake and his company NZ Water Purifier Ltd. This has included issuing a breach notice and laying a number of charges with the District Court under the Medicines Act 1981. As this is an active prosecution, we are unable to provide any further information at this time.”

In 1996, former Scientologist Jim Humble, who at one point declared himself to be a billion-year-old god from the Andromeda galaxy dispatched to Earth to save humanity, stumbled upon what would become “Miracle Mineral Solution”. By his own, deeply unreliable account he cured four fellow gold miners of malaria by mixing sodium chlorite into their drinking water. In 2010, Humble welcomed born-again Christian Mark Grenon to join him in leading the “Genesis II Church of Health and Healing” – a bogus church that professed to pursue “spirituality” rather than religion. Both men declared themselves “archbishops” and set about spreading the fabulist gospel of sodium chlorite as a “miracle mineral” panacea. They travelled the world, including Australia and New Zealand, to preach and profit.

In the middle of the last decade, the two men parted ways acrimoniously, and Humble would later disavow MMS, saying it “cures nothing”. Grenon continued the scam, however, joining with several of his children to make a fortune out of selling MMS in the US and worldwide, premised on the baseless claim that chlorine dioxide could defeat 95% of known diseases. No surprise, therefore, that they saw an opportunity with Covid-19. Interest reportedly surged when then president Donald Trump urged his officials to look into such products for Covid treatment.

As they attempted to leverage off pandemic fears, however, Mark Grenon and three of his sons were arrested and indicted by a grand jury for their roles in promoting and selling MMS as part of a US federal investigation called Operation Quack Hack. While two of his sons await trial, Mark and another of his sons are today in prison in Colombia, fighting extradition.

There is no evidence to connect the patient who wound up in intensive care with the Ngatea-based operation. Of the individual who consumed the product in New Zealand, Chris James said this: “Thankfully, we can confirm the person who needed ICU treatment is now on the road to recovery. Out of respect for patient privacy, we won’t be making any further comment.”