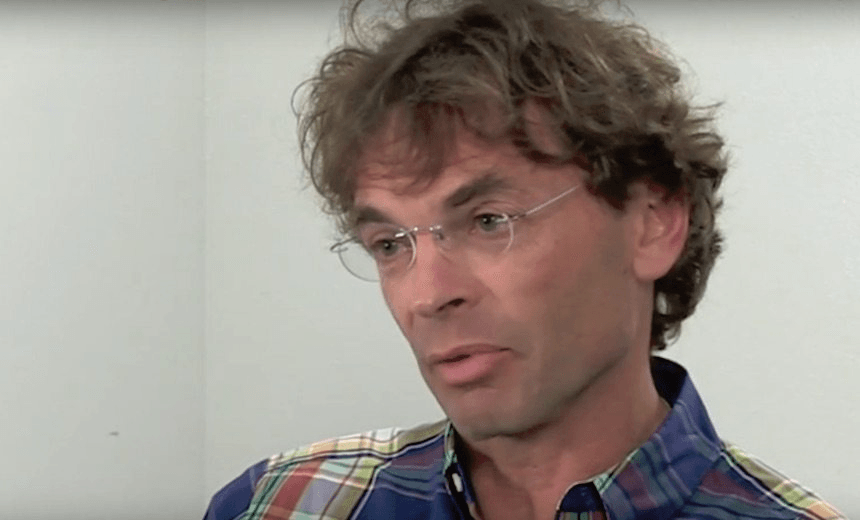 ‘There’s a lot at stake here.’ US Antarctic expert Eric Rignot on climate science in the age of Trump

By Veronika Meduna
Guest writer
Made possible by

US-based glaciologist Eric Rignot is in New Zealand this week to talk about polar ice sheets and their potential to add to predicted sea level rise. He tells Veronika Meduna that it’s more important than ever to discuss climate science and what it’s like to be a climate scientist during the Trump presidency.

Eric Rignot is based at the University of California, Irvine, and NASA’s Jet Propulsion Laboratory, where he’s been tracking changes in ice mass in several glaciers in West Antarctica for two decades. He hit the headlines in 2014 when his research showed that the Amundsen Sea region in West Antarctica had entered an irreversible state of decline, with nothing to stop the glaciers in this area from melting into the sea.

The glaciers are particularly vulnerable because they are grounded below sea level, and they sit on sea bed topography that allows the warming ocean to slip in underneath and to melt them from below.

So are these glaciers headed for total collapse?

I’d been studying that part of Antarctica since 1996, and in 2014, I came to the point … that we have learned enough and had looked at the system long enough and collected enough data to come to the conclusion that this part of Antarctica was in a state of irreversible retreat. This was the marine ice sheet instability people talked about in the 1970s, and it was right there in front of our eyes.

The key moment was really to get to the point where we’d mapped the bed topography in enough detail and don’t have questions marks anywhere in any of these troughs. They are all pretty much conducive to marine ice sheet instability. And the grounding line is retreating faster there than anywhere in the world.

This section of Antarctica alone would contribute more than a metre of sea level rise if it melted, with consequences for coastal populations, but it’s not the only place in Antarctica at risk of melting. What are the main factors?

One thing is the sea bed configuration, where the marine sectors are [ice that is grounded below sea level], and one thing is the ice shelves [floating ice, such as Larsen C], that plug the ice sheets. These are like the canaries in the coalmine. Once the ice shelves go, the glaciers can speed up and sea level rise proceeds at a much faster pace – faster by a factor 10 basically.

The big areas of [ice] mass loss are the Antarctic Peninsula, and the Amundsen Sea sector and the surrounding area to the Ross Sea. But we’re also seeing signs of change in the East Antarctic Ice Sheet, in an area called the Wilkes Land sector, which is marine based and also close to sources of warm water. These are the main places where warm water gets close to the Antarctic continent and where we see most changes today.

With research findings like this, what is it like to be a climate scientist in the US at the moment?

The previous administration was actively pursuing climate action, even though Congress and the Senate were not very supportive of that.

This administration is taking a completely different turn. For people outside of the US, you have to understand that the president doesn’t have ultimate powers. He has to govern with the Congress and Senate and the research budget in the US is decided by them. They get input from the president but at the end of the day they make their own decision. It involves a lot of people, it’s not a single congressman who decides that. And they have to factor in, in terms of earth science observations, the societal benefits of these measurements. These satellites operate for weather systems, they operate for military defence. They have a large range of applications beyond serving the purpose of studying climate change as a result of human emissions. There’s a lot at stake here.

If they were to cut down earth science data, it would affect negatively the economy and the population. It’s a reality check. What are we going to do? Are we really going to sacrifice this for some unclear reason or are we going to keep it going?

Four years, at this point in time, is a long time. How much damage could this administration do?

We faced similar difficulties during the George W Bush presidency. At the time maybe the evidence for climate change was not as strong as it is today, and that administration cut down a lot of the earth science budget, not by changing the total budget allocated to these agencies but by shifting priorities. For instance, NASA was encouraged to pursue lunar and Mars exploration, within the same budget. In the middle of that presidency, people realised that earth system monitoring was falling apart, and they reinstituted the budget and revamped the earth science programme.

Another important note is that the debate has become political but if you look at the history of science funding in the US, it was supported as strongly by the Democrats as by the Republicans. I think there’s a large faction of Republicans who are getting a bit frustrated by being seen as the guys who don’t want to support science.

On the possibility of the US doing a U-turn on the Paris Agreement and pulling its contribution to the funding of the Intergovernmental Panel on Climate Change – will it stop climate scientists from doing and talking about their work?

This is part of ongoing discussions. You can have a bill sitting in Congress that says ‘maybe we should shut down NOAA or the EPA’ … we have these discussions once in a while.

Are you personally worried about your job?

I’m not worried in the immediate future. I think any action from the new administration will take several years to come into effect. We’ve seen that in some of the executive orders – they are unlawful and have been barred by judges. The administration is learning that you can’t just change policies over night by one signature.

This administration was elected on the promise that they would deliver more jobs to fellow Americans, especially to those who feel left out by globalisation. Cutting jobs for anyone working in science and climate change is not going to be productive, and they will realise that.

One possible drawback is the development of new, clean energy in the US. Clearly this is not the time when companies can expect federal incentives to boost progress for the world to get there faster and sooner, but then again this administration will have to take a hard look at the consequences of staying in the back of all the new trends in energy production.

People have to realise that this whole debate about climate change and how we deal with it will take us to a better world, and not one where we have to tighten our belt and suffer, but where we’ll actually be better off.

Do you feel restricted in the way you can talk about climate change?

During the Bush years, there was a lot of scrutiny of the press releases we were issuing, the science we were doing. Talking about global warming was unacceptable, so they would edit a press release, but they never barred us from talking about the science. There were people who suffered from personal attacks and threats to their grants.

If you look back at the history, people who fought against CFCs, which destroy the ozone layer, or people who fought against industry to limit the inclusion of lead in gasoline, they faced more serious hardships. The difference is that these guys were single individuals. When you are to talking about climate change science today, you’re talking about thousands of scientists.

Attacking me would not do anything to climate science. It would affect me, of course, but it would have absolutely no impact on what the community is doing.

How do you keep talking about climate change if evidence doesn’t seem to matter anymore?

I don’t think this administration is going to change. They’ve formulated some opinions on some things, some of them clearly wrong. The wrongness of these ideas was pointed out to them and it’s not making them change one bit. They have a different way of thinking and I can’t relate to it. It’s the way it is.

The most important thing now is for the people to voice their concern, their disapproval of certain things that this administration does. People have the right to voice concern … whether this pressure from the population is exercised well enough remains to be seen, but basically it’s up to the people.

Eric Rignot’s public lecture ‘Future sea-level rise from warming of the polar ice sheets’ is tonight at 5.30pm at Victoria University of Wellington