No decision on extending lockdown can be made until officials are able to conclusively trace the path of the virus from the border, write Michael Plank, Shaun Hendy and Siouxsie Wiles.


New Zealand’s latest community cases, the first to be infected with the more infectious B.1.1.7 variant of Covid-19, have a plausible link to the border through one person’s workplace at LSG Sky Chefs, a business that deals with laundry and catering from international flights.

But it is not a definitive link. Indeed, prime minister Jacinda Ardern announced this morning that genome sequencing was not able to link the new infections to any cases we have seen recently in returned travellers.

Worryingly, this leaves the possibility of a more widespread community outbreak.

Even if a connection to the workplace can eventually be established, it may not be a direct human-to-human link. The LSG Sky Chefs worker is not thought to have had face-to-face contact with air crew or international travellers.

This means there may well be other cases in the chain of transmission between the border and the worker, and these cases could have sparked additional community transmission chains.

This makes the situation potentially more dangerous than the recent cases associated with the Pullman hotel managed isolation facility, which had a clear and direct link to the border. 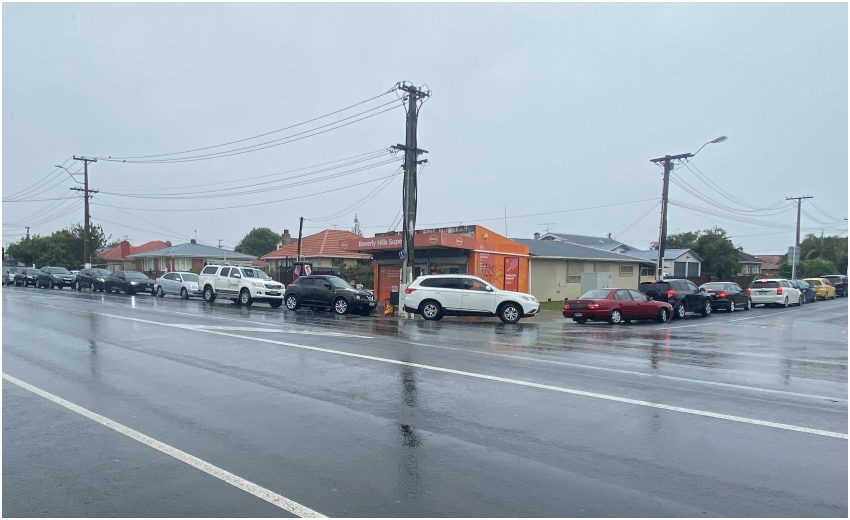 Lines for a Covid-19 test stretched almost 1km down the road from the pop-up testing site at Papatoetoe High. (Photo: Justin Latif)

Auckland returned to level three lockdown conditions at midnight on Sunday following the announcement of the three new cases. The rest of the country moved to alert level two, with both restrictions in place until at least Wednesday this week.

Genome sequencing has revealed the new community cases have the more infectious B.1.1.7 lineage. This variant (also known as VOC-202012/01) was first identified in the UK late last year. Since then it has rapidly become dominant across England.

It has also sparked outbreaks that have led to short, sharp restrictions in the Australian states of Queensland, Western Australia, and most recently Victoria.

The UK has one of the best Covid-19 genomic surveillance systems and this has allowed scientists to track the spread of B.1.1.7. Multiple lines of evidence now point to an increase in the reproductive number of the virus.

This number, often called R0, is the average number of people each infected person will go on to infect. Researchers in the UK recently estimated R0 to be 43-82% higher for B.1.1.7 than for previous variants.

This is why moving Auckland to alert level three was the right thing to do. Given the highly infectious nature of the B.1.1.7 variant, and the chance these infections may have come from a source other than the family member’s workplace, there may be another cluster of cases out there that we don’t know about yet.

We know that some family members travelled to New Plymouth, in the Taranaki region, during the Waitangi weekend. There is a risk they passed the virus on to others, but there is also a reasonable chance this was before their infectious period.

At this point, it would seem unnecessary to place the Taranaki region under stricter lockdown conditions. We will know more later in the week, once results are in from tests of people who visited locations of interest in Taranaki.

There are two main questions that need to be answered before we can consider relaxing alert levels for Auckland and the rest of the country. Firstly, we need to find out whether any of the three known cases passed the virus on to others in the community.

If so, exposure to the virus is possible and anyone should follow the instructions on the website. If all those who may have been exposed can be identified quickly, the government will feel more confident about relaxing alert levels in the next few days.

But secondly, we also need to know if there are other chains of transmission stemming from cases in between the border and the family. Testing of close and “casual plus” contacts of the three cases will help answer this over the coming days. Testing of people connected with the LSG Sky Chefs workplace and Papatoetoe High School will be particularly important.

Finally, if there are cases that were infected prior to the three cases announced on Sunday, the virus could have been spreading in the community undetected for several weeks. Modelling shows that if there are additional cases upstream of the LSG Sky Chefs worker, the outbreak may already have infected more than 50 people.

But if we can rule this out by establishing a direct link to the source of infection, the outbreak is likely to be much smaller.

If we find significant community transmission, we need to be prepared for alert level three restrictions to last several weeks. Because we are dealing with a more transmissible variant, it is even possible we might need to move to alert level four to contain and eliminate the outbreak.