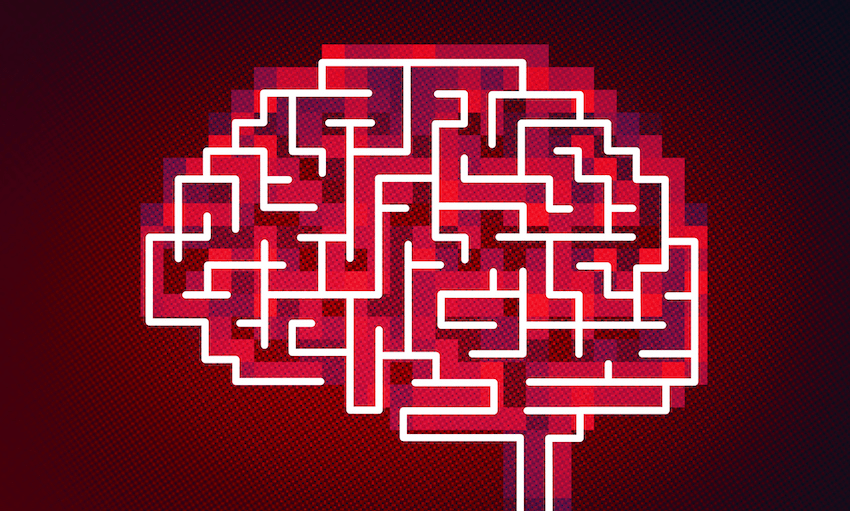 By Suresh Muthukumaraswamy
Guest writer
Made possible by

The connection between cannabis use and psychosis is far more murky than asserted by yesterday’s article on The Spinoff, writes Suresh Muthukumaraswamy, an expert in how psychoactive drugs modify brain and behaviour.

Yesterday, separate articles appeared on The Spinoff and on Newsroom (written by a colleague of mine) that raised concerns about potential links between cannabis and psychosis in the context of the current cannabis referendum. However, in various places evidence presented in these articles is misinterpreted, mis-stated or not properly contextualised within the referendum legislation as written. So let’s dig into the details.

It has often been contended that cannabis is associated with an increased risk of psychosis in youth users. While statistics such as “double the risk” or even “eight times the risk” appear scary, they fail to take into account low base rate risk of psychosis. A better way to present these statistics is as the Number Needed to Prevent – this is how many young people we would need to stop smoking cannabis to prevent one psychosis case emerging. Using UK data (we lack NZ data on psychosis prevalence in youth) this has been estimated as 1360 in heavily using young men and 2480 in heavily using young women. So we would need to stop about 1700 heavy cannabis users to prevent one additional psychosis case per year. Let’s be super-cautious and round this down to 1000. That would mean, if an extra 1000 young people started smoking cannabis heavily we would get one extra psychosis case.

In New Zealand there are around 500,000 young people (age 15-24) and it has been estimated 10% smoke cannabis heavily (around 50,000). So, after legalisation it would take around a 2% increase in cannabis use in this demographic to develop a single extra psychosis case. Would we see such rises? The best evidence comes from Canada which has a comparable regulatory scheme. If anything in Canada they have seen slight decreases in youth consumption. In summary, neither prohibition nor legalisation alone are effective interventions to prevent cannabis-induced psychosis because the Number Needed to Treat values are so large.

It is important to stress that no causal relationship has been established between cannabis and psychosis although numerous studies point to elevated risk. It is important to read papers carefully. Let’s take a study cited in yesterday’s Spinoff article. Deep in the text it is stated that “After psychotic symptoms at age 11 were controlled for, the risk for adult schizophreniform disorder remained higher among those who used cannabis at age 15; however, this risk was reduced by 31% and was no longer significant”. So after controlling for early psychosis symptoms before cannabis use was initiated there was no relationship between cannabis use and psychosis. It is also important to bear in mind the entire result depends on a sample size of just three cases in the category of interest – just three. Unfortunately, it is easy for even experts to misread medical statistics and sometimes authors of papers can over-state the case.

In several balanced review articles (here and here), Ian Hamilton – a UK academic specialising in the relationship between substance use and mental health – outlines the many difficulties in trying to estimate potential contributions of cannabis to psychosis development. Particularly problematic in these observational studies is “residual confounding”. Here scientists try to correct the observed relationship between psychosis and cannabis use for other variables such as age, gender, and other drug use – particularly tobacco. Typically, the strength of the cannabis-psychosis relationship decreases when corrected for these factors. Because our estimates of the confounds themselves can be vary noisy (for example, lifetime tobacco use is very hard to measure) some of the confound’s effect will remain in the data – residual confounding. Suffice to say, the fact that scientists have been studying this topic for nearly 40 years with much scrutiny does suggest that overall “at a population level the increased risk is weak and the vulnerabilities relatively rare”.

Although the overall risk of cannabis-induced psychosis is low, risk factors that have been observed linking psychosis and cannabis appear to be the strength of cannabis in terms of THC content, age of use and frequency of use. New Zealand’s Cannabis Legalisation and Control Bill attempts to ameliorate these by having caps on strength (15% THC maximum) and an age limit of 20 – which is a practical compromise from a harm reduction perspective. Perhaps the only thing missing I can see in the bill from a psychopharmacologist’s perspective is no mandate for cannabidiol (CBD) to be present in sold products. Although emerging, best evidence suggests CBD can ameliorate negative effects of strong THC products. Currently, the bill proposes extra taxes on  THC content – offsetting these taxes with CBD incentives might be one way to encourage the re-introduction of CBD into recreational cannabis from which it has been bred out by illicit growers.

Recreational users currently source drugs through an unregulated market that is only too happy to sell users more harmful drugs, such as synthetic cannabinoids and methamphetamine. The risk of psychosis with these drugs is far higher than with cannabis with a 15% THC limit cap as proposed. Not only that, since 2014 synthetics have killed over 70 Kiwis. From the disturbing toxicology and pathology resports recently published by ESR and Auckland City Hospital, the physical and mental health damages caused by synthetics drugs in non-fatal cases will likely be extensive. Not only that, we are likely to see THC levels in recreational cannabis continue to rise under black-market conditions with no ameliorating CBD content.

During the course of the referendum debate, I have observed in various commentaries a tendency to get overseas experts to weigh in on the debate. But it is entirely unclear whether these experts are even familiar with the proposed legislation and the particular demography of drug use that New Zealand faces. I would be curious to see how these experts would answer if they were asked to write legislation to reduce the potential mental health harms from a legalised cannabis regime – what features would it include? My guess is that it would end up looking pretty similar to the bill as it is written. When a referendum was announced I was on the fence. After reading the content of the bill, I moved into the “yes” column because it ticked all the public health boxes.

It may seem odd to say this, but the Cannabis Legalisation and Control Bill is not at all inconsistent with the desire to see New Zealand becoming Smokefree by 2025. The bill explicitly forbids selling of tobacco and alcohol at licensed vendors (Section 193) and similarly from consumption venues (Section 197). From a harm reduction perspective, one would hope that tax revenue could be used to subsidise cannabis-leaf vaporisers – which allow cannabinoid vapours to be inhaled avoiding concurrent tobacco use and without damaging tars and carcinogens entering the lungs. This represents the most healthy and precise way to dose cannabis. It allows users to accurately calibrate the doses they take. With product labelling on potency, users would be enabled to find their limits – avoiding excessive consumption. Also note that we will not see undercutting from foreign imports as Section 41 of the bill prohibits imports and exports.

Much of this perspective has been about risk. Risk is always relative. Did you know every year 1/100 rugby players in New Zealand will make an ACC claim for concussion/brain injury? That represents a far greater brain risk than cannabis. As a society we definitely are not going to ban rugby – and thankfully so! Instead we take a mature harm reduction approach, for example punishing dangerous tackles or implementing concussion protocols.

At this late stage in the process polls suggest that it is quite possible that the Cannabis Legalisation and Control Bill will not make it across the line. This may partly be due to the complexity of epidemiological data and legislation that have not always been accurately represented in public discourse. I hope this article helps those who are yet to vote see that passing the referendum would help improve the overall health outcomes from the use of cannabis – and that it’s unlikely to impact levels of cannabis-induced psychosis in our community.

Suresh Muthukumaraswamy is an Associate Professor in Psychopharmacology at The University of Auckland. His research and teaching speciality is on how psychoactive drugs modify brain and behaviour.

Read more: Everything you need to know about the 2020 cannabis referendum