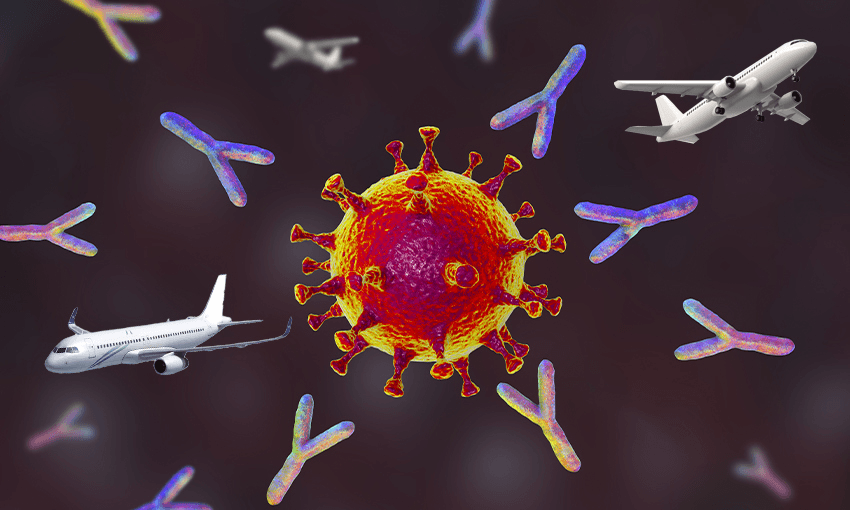 Could this new Covid test be a passport to the world?

As countries look to open up, being able to show immunity to Covid-19 may be what’s needed to ensure travellers aren’t bringing the virus in with them. A new coronavirus antibody test may be just the ticket to make that happen, but it’s not there yet. Mirjam Guesgen reports.

Scientists from Switzerland and France this week unveiled a new test that can measure how well the body can fight off the virus using neutralising antibodies. Essentially it tests whether someone is “immune” to the virus.

Details of the test were published in the journal Science Translational Medicine.

Neutralising antibodies prevent infection by blocking the virus from entering the body’s cells. It does that by clinging on to the spike protein on the virus and stopping it from linking up to the ACE2 receptor on the surface of the cells.

If spike is the key to entering cells, and ACE2 is the lock, neutralising antibodies gum up the lock/key fit.

The newly described test gives a measure of how well antibodies are blocking that linking up, or neutralising the virus.

The test works by putting both spike proteins and ACE2 molecules on the outside of tiny, fluorescent beads. If nothing’s there to stop the two from sticking together, the beads will glow brightly. Add someone’s blood serum (that’s blood with all the cells and bits that help clotting removed), containing antibodies, into the mix and the beads won’t glow as brightly.

Researchers then set a cutoff for “dimness” where 95-99% of the spike proteins have been neutralised.

From a pool of 300 people, the test could correctly pick out samples that were known to have high levels of antibodies (from someone who’d had Covid-19 before) 96.7% of the time, and ones without them (someone who’d previously tested negative for Covid-19) 100% of the time.

But the researchers went one step further than other similar antibody tests. Their methods let them put different forms of the spike protein – representing different existing or completely new virus variants – on different coloured beads and run the test on all of the forms at the same time.

“You can say, well, my serum prevented the blue, the red and the green beads from binding but it did not prevent the purple beads, which means my serum doesn’t have enough neutralising antibodies against, say, the delta virus. All this in a single tube in a couple of hours.”

The researchers did just that. They engineered their test to work with the spike proteins from the alpha and beta virus variants and ran it on blood samples from 59 patients who had been hospitalised with Covid-19.

They saw that most people had working antibodies against the original coronavirus spike protein and the alpha variant but only just over half of people could neutralise the beta variant’s spike proteins.

And people who had had more severe Covid-19 before, sometimes ending up in intensive care, had antibodies that were better at neutralising the spike proteins, including different forms of it.

On the flip side, Trono says their test could help identify people who might still be vulnerable to new variants.

Trono’s team also proposes that this new test could form part of Covid passports – travel certificates that aim to show that someone has immunity to the virus.

Several countries, including the UK, those in the European Union, Canada and Chile, are already rolling out Covid passports ahead of reopening their borders.

Some passports, like Canada’s ArriveCAN or the UK’s NHS Covid Pass, show that a person has received all doses of the vaccine. In other places, like the EU, there are different passports depending on whether someone has been vaccinated, recovered from Covid-19 or has received a negative Covid-19 PCR test. None use antibody testing so far.

But showing that someone is vaccinated isn’t enough, says Trono. “Not everyone responds equally well to vaccines,” he says, referring to people who are immunodeficient such as people with cancer, transplant recipients, or other people on immunosuppressive drugs. “You give them a passport but they’re not protected.”

The authors argue this kind of antibody test may be more useful if immunity passports are to become a widespread thing.

The issue however with this test, and others similar to it, is that it can’t actually tell how likely someone is to be reinfected.

“This crucial thing that we still need a better grasp on with Covid and immunity is what we call the correlate of protection,” explains Nikki Moreland, an immunologist from the University of Auckland. “It’s the thing that can be measured in someone to say that ‘yes, now you’re protected’.”

She says it’s “highly likely” that the correlate is neutralising antibodies but that scientists aren’t certain yet. “There’s a lot of intense scientific effort going into that right now.”

She adds that, while the new test is “really cool technology”, it hasn’t been thoroughly put through its paces yet. Until the test is trialled in the real world, to see how well it predicts whether someone is protected from reinfection, it’s difficult to say how effective someone’s antibodies are, Moreland says.