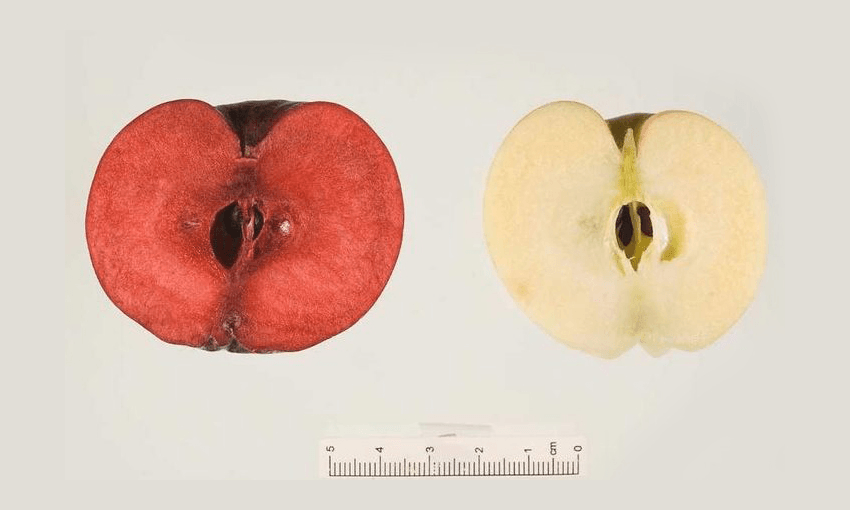 ‘The core technology of the future’: Time to rethink NZ’s GMO-free status?

Trees with red trunks and apples that are red right the way through and flower all year round. Should we back or block the genetically changed plants New Zealand scientists are growing? Charlie Dreaver reports for RNZ.

At a Plant and Food Research greenhouse in Auckland, one of the sections is filled with $300 apple trees, and Andy Allan, a professor of plant biology, is pointing out one of his favourite experiment, a tree with bright, fuchsia-coloured flowers.

“The particular red gene we’re testing is under a strong expression, so the roots are red, the trunk is red, the leaves are copper and the fruit goes on to look more like a plum, it’s so dark.”

The apple has an extra apple gene, making it genetically modified. There are other plants in this room that have exactly the same number of genes, but they’ve been edited.

Along with the apples, pears, tomatoes and petunias are thriving, but many also flower all year round and produce seeds five years earlier than usual.

Allen compares the practice of gene editing in plant breeding to key-hole surgery.

“It just makes a cut in a place you know exactly where it’s going to go to. That cut is repaired by the plant, but often the plant makes a mistake, but those mistakes are like the natural equivalent to mutation and variants you see out there in the environment.”

He says the public’s perception of the research is much more sinister than what actually happens.

“We are academics or public civil servants and we’re doing experiments using the plant’s own DNA, so the perception of what we do as being evil or dangerous, is way different than what actually happens in this greenhouse.”

Other countries would plant these crops in the field, he says, and he believes some of those growing in the greenhouse are ready for the outside world.

And the benefits of what’s being grown could be significant, he believes, including trees which would not need cooler winters to flower and grow fruit.

But everything that leaves the facility, even the soil, will have to be destroyed.

“The only thing exiting this greenhouse at the moment is knowledge.”

Parts of the farming community say they should have choice over whether to use GMOs or not.

But others, including the minister for the environment, David Parker, argue there is no need to jump the gun on introducing GMOs into the environment.

In his last report as chief science advisor for the prime minister, Sir Peter Gluckman laid out the ways genetic modification or gene editing can benefit the agricultural sector with pasture management and emissions.

“New Zealand scientists have developed promising forages using genetic technologies that could be used to make major progress through higher energy, lipid rich rye grasses which are now in field trials in the United States.

“However, these have not been and effectively cannot be subjected to field testing in New Zealand.”

He said New Zealand needed to revisit the contentious topic.

“We have such big challenges ahead of us, between environmental degradation, climate change, the future of agriculture, the future of New Zealand’s economy, the way we live, the way rural life and provincial life occurs.

“This is the core technology of the future, alongside the digital technologies and precision agriculture, we can’t afford not to have the conversation.”

GM and the law

At the moment, all applications to release GMOs, need to be approved by the Environmental Protection Authority.

Since that change was written into the act 1996, coming into force two years later, only three GMOs have been approved – a vaccine for equine flu, and two cancer therapies for clinical trial.

The Act was reviewed in 2015, but no real differences were made for those scientists and industries interested in GM and GE.

Gene editing, which uses the DNA already existing within the organism, falls under the same legislation as genetic modification, which some scientists argue is different.

Since the act was introduced there have been new technologies such as the CRISPR technique created in 2012, which involves editing parts of the genome by removing, adding or altering sections of the DNA.

Legal and Scientific researcher Dr Julie Everett-Hincks, from the University of Otago, believes legislation is due for an update.

“They didn’t even contemplate this technology back then, there have been some minor edits since then, but really with this new technology it’s trying to work out where it fits.

“And you could argue that under the current legislation that it’s having difficulty fitting, so a review with differently needed.”

But Pure Hawke’s Bay – which was instrumental in the move to make the Hastings District Council adopt a 10 year moratorium on genetically modified crops – says business would suffer if any changes were allowed and they argue that not enough is known about the technology and its effects.

Its chair, Bruno Chambers, says there are other options to investigate in order to lower emissions, which will not require GM.

“We’re not anti-science and if something came along that was genetically modified that was really going to offer huge benefits to a number of farms, then we’d be looking at it with an open mind, but it always comes back to the markets.”

Chambers believes there would be an impact on the market if New Zealand crops were no longer GM-free.

“People are just starting realise how important it is for the New Zealand brand, it’s a critical part of our selling position.”

And earlier this year, the European Court of Justice ruled gene editing, is still GM and would need to be labelled as such, and would adhere to the same rules.

An orchardist in the region, David Cranwell says having GM in New Zealand will have an impact on where he can sell his apples.

There’s also resistance to any change at this stage from the government.

David Parker agrees with the European Courts decision to include GE under genetic modification rules and has no intention of changing the legislation here.

“It takes a precautionary approach, people who want to make an application to release the GMO can, that’s then dealt with by the regulator and we think the law is fit for purpose.

“I’d have to be satisfied there was a need to change the law, and I’m not satisfied.”

He also highlights the trade benefits in keeping crops GM-free.

“Sometimes they might be overstated, but none the less they are real.”

If there are to be any changes in the use of GM, Parker says the government will first be looking at pest control, rather than agriculture.

This article was originally published on RNZ.