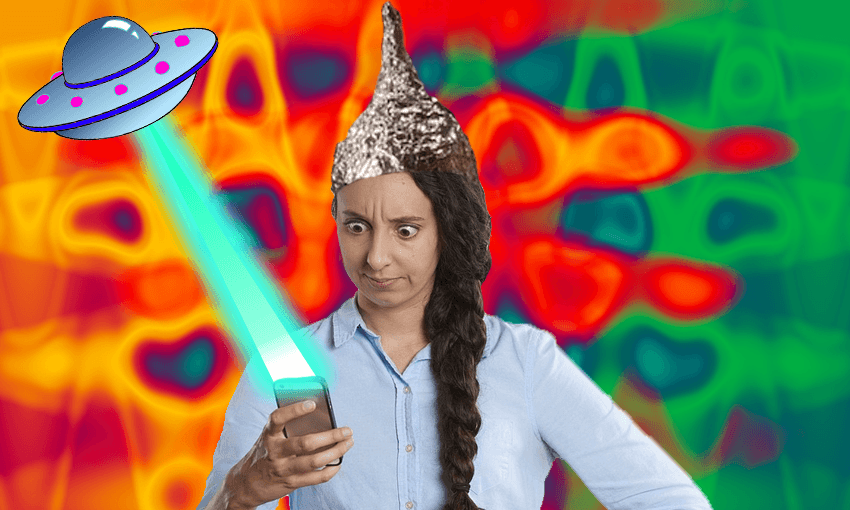 Emily Writes: What is 5G and how likely is it to fry my brain?

Forget 1080 – these days 5G is the conspiracy theory that everyone is freaking out about. But is there any basis for the scare stories? Emily Writes tries to unravel fact from fiction.

Have you heard the news about 5G? Folks are absolutely frothing over it in conspiracy groups on Facebook. They’re absolutely convinced that Elon Musk has 20,000 space missiles aimed at Gore and it’s interfering with the alignment of planets and uh… It maybe was why that seagull took that chihuahua.

The anti-5G truthers have a fair bit in common – subtle racism toward China, ableism against neurodiverse people, and an unhealthy obsession with Grimes. I wanted to sort the fact from the fiction so I thought I’d ask someone who would know. The following is an exchange between me, warrior for truth and someone who was drunk through most of my high school science classes and Dr M R. X. Dentith, a philosopher at the University of Waikato who specialises in conspiracy theory.

If I am found dead – avenge me.

Emily Writes: So apparently 5G is going to kill bees and dogs and it is causing earthquakes and scattering crowds for MILITARY PURPOSES and whales are confused they’re trying to talk to each other and they’re like *whale noise* and then it’s like 5G!! And then they all think it’s another whale but it’s 5G. So my question is: What is your name and are you paid for by Big 5G.

I’m Dr. M R. X. Dentith, and whilst I dream of being covertly paid by big business to allay suspicions about what are probably very beneficial (and not at all carcinogenic) technologies, I am not (currently) being paid by Big 5G.

I’m not sure you’re not paid for by Big 5G but I have read three blogs about 5G and you’re what….a scientist? So probably our skill level is at the same level correct?

Well, a philosopher  at the University of Waikato who specialises in conspiracy theory. So it’s probably 50/50 at this stage as to who is the more qualified in this conversation…

No. I mean, not that I’m aware of… Some people think 5G was responsible for a bunch of bird deaths outside the Hague, but a) mass bird deaths happen a lot more than people think and b) there’s no evidence a test of 5G technology occurred at the time of the event. Indeed, the initial reporting of “5G kills birds” was traced back to one John Khules, who is a bit of fear-mongerer about 5G. Did you know it also caused the wildfires in California this year… I mean it didn’t, but he thinks it did.

Don’t ask me about 5G and cockatiels, though.

Is 5G the enemy of bees?

Should I learn to drive or will I have a self-driving car soon?

You think we’ll get self-driving cars before the climate apocalypse hits? And you’re worried about 5G…

Was 5G invented by a feminist cabal to enslave the male population and instill a lesbian segregationist society?

Unfortunately, no. Whilst I don’t want to downplay the role of women in the development of telecommunication technologies (especially since the great Hedy Lamarr did incredible, groundbreaking work developing what we now call “Bluetooth” and “WiFi”), 5G is a marketing term, probably developed by men in grey suits, for a series of technologies developed by systems engineers (probably mostly men in polo shirts), who are likely to be more libertarian in their politics than they are in favour of lesbian segregationism.

Will 5G break the moon?

According to ex-BBC sports journalist and noted hater of alien, shape-shifting reptiles, David Icke, the Moon is a hollow sphere which amplifies a signal from the planet Saturn (AKA Satan) which is part-and-parcel of the control mechanism the Archons use to keep us in a hologrammatic prison. So, if anything, 5G will act as a counter to the signal from Satan. Thanks 5G!

5G is a marketing term for a fifth-generation cellular wireless standard. Basically, 5G is faster internet on your phone (and possibly your home if certain telcos decide that piping internet to your house with wires or fibre optic cables is so early 2000s). Its predecessor, 4G, is likely being used by most of your readers right now. The only real difference is that 5G uses (yet) another part of the electromagnetic spectrum.

Why is 5G the new thing people are afraid of?

Sometimes it’s just technology which gives people the fear. For a long time we were told that cellphones would give us cancer, and people used to say the same thing about transistor radios. Frankly, once upon time people thought reading too many books would overheat the brain.

And others are concerned that certain superpowers (or emerging superpowers) will install backdoors in 5G systems in order to snoop on us. Well, snoop more. Frankly, maybe we should just go back to carrier pigeons.

How do we combat anti-science propaganda when it’s linked to technology fears?

That’s a question which has launched a thousand academic articles. There is no easy answer, in part because not all fear of technology or science is irrational. Sometimes people launch products with known safety flaws (like the Ford Pinto) or which use technology to cheat environmental tests (the VW emissions scandal). Sometimes scientists let people develop cervical cancer (the Unfortunate Experiment) or syphilis (the Tuskegee Experiment) for the “good” of science. Science and technology is produced and undertaken by humans, and sometimes humans are misguided or downright deceitful. So, the problem isn’t simply how do we combat anti-science propaganda; it’s “When is it anti-science propaganda, and when is it a rational, sceptical response based upon the evidence?”

My friend said we need to be the Scully to our inner Mulders. How do we pull ourselves back from being drawn into online conspiracy theories? The YouTube videos are so slick it’s easy to get sucked in.

Putting my conspiracy theorist hat on for a moment (lined not with tinfoil but velvet; got to keep comfortable), the problem isn’t that the videos are about conspiracy theories per se (because not every conspiracy theory is false or irrational to believe; I really ought to plug my books here…) but, as you say, the videos are not just slick, but there are so many of them. It turns out that unwarranted fear-mongering means you can pump out countless videos without ever having to rely on pesky things like fact-checking or reading past the abstract of an academic article. People like Natalie Wynn or hbomberguy, who end up fisking the kind of material which is increasingly popular on YouTube – alt right race science, climate change denial, Jordan Peterson etc – produce far fewer videos because it just takes them more pre-production time to get to grips with the arguments. But if all you’re interested in is alarming people on the basis of a hazy understanding of the science, then you can slickly produce several videos a week, thus saturating the market with woo.

So, how do we pull back from that? Aside from not getting all our information from one source (*ahem* Twitter *cough* Facebook *achoo* YouTube) we could spend more time asking whether our favoured talking heads have any real expertise, which means asking what their background is, how their views fit into those of their peers, and asking whether said talking head is being sincere. A little scepticism about everything goes a long way, after all.

Should we be afraid?

You should be afraid. Deathly afraid. Afraid that Western governments sometimes cover or make up rationales to invade foreign nations. Concerned that our local political sphere is being increasingly being swayed by astroturf groups. Worried that law enforcement groups worldwide seem to be more friendly with fascists than anti-fascists.

You just don’t need to be afraid of 5G.