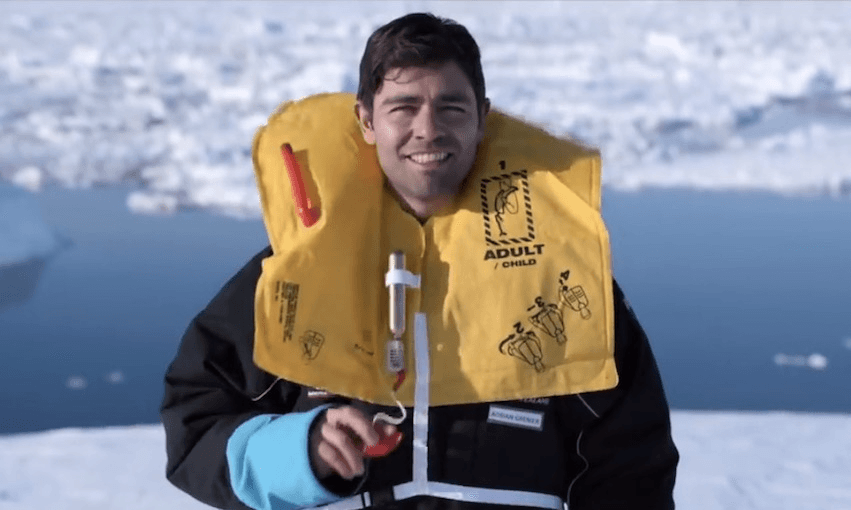 28th November 1979 was like any other day; I think it was a bit cloudy and temperate. I went to school on the bus, my mother went to work. I liked school and had a great teacher called Mrs. Kennedy. I was nine years old. My dad was away on a fantastic day trip to Antarctica that had seen him leave for Auckland the afternoon before. I had never heard of Mount Erebus, a name that would come to dominate the news for many years, and my life for many more.

My main relationship with Air New Zealand at the time was through getting my Junior Jet Club book signed by the captain, and hopefully getting to visit the flight deck, which was a thing in those days. I loved planes and one day I wanted to sit in the left seat of a big one. Like most kids of the era, I wasn’t particularly up on the news so hadn’t a clue about the missing plane. My mother knew by mid-afternoon that something was amiss though chose to spare me worry until she knew more. I spent the afternoon and evening blissfully unaware of how things were about to change forever. I woke up the next morning to the horrific news that my father and 256 other people had died when the DC-10 they were flying in hit a volcano called Mount Erebus.

Erebus is “darkness”, or the place where the dead pass immediately after dying in Greek mythology. Darkness is an appropriate word for the time that followed. Very quickly stories were circulating laying the blame with flight crew, stories that originated in very high places. A captain’s notebook turned up empty when it had left his home full. Within a few years a new term entered the Kiwi lexicon; “an orchestrated litany of lies”. Awful things were said and done. Justice was denied by obfuscation.

Time passed, and the world moved on in many ways. But a part of it stood still. For as long as I can remember I felt it important to journey to the ice. To see where it happened and to make peace with the volcano. It is not a simple place to visit, and correspondence from ministers and prime ministers were very clear about this. Only scientists and technicians got to go. Over time, I began to realise that you actually could get to Ross Island. It was a select group; if you knew someone, or were an artist, or a songwriter, or a poet, or a priest, or a filmmaker, or a journalist, or a politician, you might get a trip to McMurdo Sound. Some more than once. Curiously, no one from the bereaved families had ever been offered this opportunity. No one from the group most affected by the crash had ever stood on this hallowed ground.

I did what anyone from my sort of middle class, Pākehā background would do; I wrote a letter to the paper. My letter led to being interviewed on the TV news. Through the TV piece I was contacted by one of the daughters of Jim Collins, the captain of Flight TE901. I later celebrated a birthday with Jim’s lovely family. Spoiler alert: the crew did not cause the crash.

After the media flurry, however, all became frustratingly quiet again. The 30th anniversary was coming closer and there was a rumour that something might happen for the victims’ families. It felt like now or never. I wrote an email to the then CEO of Air NZ, Rob Fyfe, and a dialogue began. A process involving Air NZ and the New Zealand government began. A plan was afoot. A ballot was drawn. On the 30th anniversary, 28 November 2009, I and five other family members were at Scott Base to remember. Later, other family were able to visit the ice. I am not sure if everyone who needed to go got to go, though many did. I remain grateful that this happened. Through this experience I met some fantastic people: my fellow travellers, Air NZ management and employees, scientists and technicians, American Air National Guard pilots and crew.

Air New Zealand is not the company that it was on the cusp of the 1980s. Gone are the grey men in grey suits. Gone is former CEO Morrie Davis and his giant TV screen glasses. Gone is the fear of Robert Muldoon. Gone is the number eight wire, she’ll be right mate concept of flying. A striking sculpture called “Momentum” was installed at the company’s headquarters to honour those who died on Erebus and at Perpignan almost three decades later. At the dedication CEO Rob Fyfe publicly said sorry. PM John Key didn’t say sorry, but that wasn’t his style. I now had a good relationship with an entity I once despised. I was asked to speak to a group of airline staff and it was a joy and a privilege. Since 2009 there have been regular emails to the Erebus families, and an annual invitation to gather at “Momentum”. Very occasionally I have written back. These last few weeks has been one of those times.

To say I was astounded that Air New Zealand had filmed a safety video on Ross Island, Antarctica would be an understatement. I received one of those routine updates that delivered this piece of news as though it wasn’t the worst idea ever. It was acknowledged that the region had special significance to me and my family and all care and sensitivity had been applied, etc. I was invited to write if I had questions or concerns. Why, yes, I did have questions and concerns. Thank you for asking! The first one I won’t be committing to print. I dusted off my keyboard and proceeded to explain how this was an awful idea; it was offensive, it was hurtful, it was hubristic, it was insensitive, it was tone-deaf. To use the parlance of our time; the optics are terrible. I said it was a very bad idea for me, and it was a very bad idea for them. I said don’t do it. I didn’t even mention that doing shtick in Shackleton’s Hut was another disrespectful gesture. I received a reply noting my response. The next email came some days later. It was pretty much the same email with a bit more detail. I responded again, this time with a more concise outline of why this was a really bad idea. That one was not responded to.

The video was released on March 1st. I had been promised an early preview which was sent late the night before. For those of you who have not seen it, it is very well shot. It is loaded with scenery eye-candy and classic Kiwi jokers. It stars a social media influencer/ environmentalist. It is energetic fun with a message: look after the planet. Be safe on your flight. And yet, why was it ever made? Those making it knew it would be a very hard watch for some. They also must have explored the irony of a safety video in a location so clearly identified with a horrendous disaster. They didn’t show the mountain, but the mountain dominates all of the locations used in the video, barring one or two. Mount Erebus and the broken DC-10 are woven deep into the New Zealand consciousness. Many, many people knew someone, or someone who knew someone. A colleague told me today that Erebus was our JFK moment. Everyone remembers where they were when they found out. Like the mountain itself, it is a big f-ing deal. Many of us would like it not be. Now every time we fly on an Air NZ plane over the next few months, we get to think about Antarctica. I’d prefer to chose when I think of Antarctica.