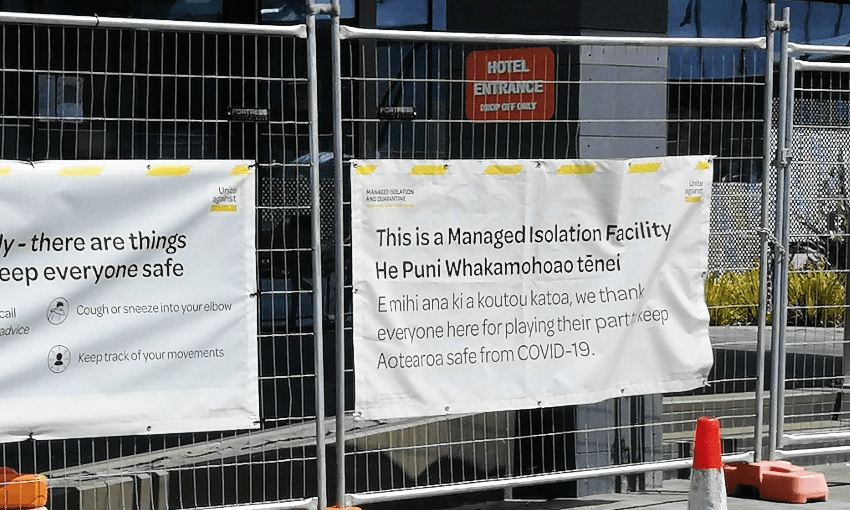 A Covid-19 isolation hotel in Auckland. Photo: The Spinoff

A Covid-19 isolation hotel in Auckland. Photo: The Spinoff
Opinion

A new studies compares data on both sides of the Tasman. Siouxsie Wiles looks at the findings.

Another day, another Covid-19 research article. You might have seen the media headlines from this one. They all went along the lines of NZ’s MIQ system four times more likely to be breached than Australia’s. Which is what the data shows. But as usual, the devil is in the details.

The new article is a collaboration between academics at the University of Otago Wellington and the University of Melbourne. Its lead author is Dr Leah Grout, but also named are the powerhouses of New Zealand Covid-19 epidemiology, Professors Nick Wilson and Michael Baker and Dr Amanda Kvalsvig. The article is a preprint which means this version hasn’t gone through peer-review.

Dr Grout and colleagues searched official websites to identify outbreaks and breaches associated with Australia and New Zealand’s managed isolation and quarantine systems. They then combined that information with the number of returning travellers, and the number of travellers and border workers testing positive for Covid-19, to calculate what they refer to as the failure risk.

So what did they find? From the middle of June 2020 till the end of March 2021, New Zealand had 127,730 people come through MIQ, with 758 people testing positive. That means 0.6% of the people returning tested positive. In that time, they say we also had 10 system “failures”. As a quick aside, I hate the use of the word failure to describe border breaches. In  my view it belittles and undermines the massive efforts being put in by the thousands of people working to keep our borders as safe as they can and to whom we all owe a debt of gratitude. In the study, the authors’ definition of failure includes any border or MIQ worker who contracted Covid-19 through their work. The authors compute what they refer to as the “failure risk per 1,000 positive cases in quarantine” by dividing 1,000 by 758 (=1.32), and then multiplying that by the number of breaches. Which for New Zealand gives a value of 13.2.

How about Australia? The first thing to note is Australia has a state-by-state managed isolation/quarantine system and there has been a massive difference in the number of returnees entering each state and the number of people testing positive. I’ll get back to that in a bit. Adding all the states together, Australia has had 255,598 people through the system and 3,400 people test positive. That means overall, 1.33% of Australia’s returnees have tested positive, which is double New Zealand’s overall rate. They’ve had 12 system breaches so crunching the numbers, Australia’s failure risk per 1,000 positive cases in quarantine is 3.5. And that’s where the four times more likely to be breached headline comes from. It’s no wonder that became the headline, it’s stated in the abstract of the paper.

But is that the only comparison we can make from the data? The authors worked out another number which they call the “failure risk per 100,000 travellers going through quarantine”. For New Zealand it’s 7.8, while for Australia its 4.7. By that measure the headline would have been that breaches were 1.6 times more likely for New Zealand. That paints a different picture.

As I mentioned earlier, Australia’s managed isolation/quarantine system differs state-by-state. Those differences are reflected in the number of times people are tested during their 14 day stay as well as in the number of returnees and people testing positive. New South Wales has had the most returnees and, unsurprisingly, the most test positive: 128,646 and 1,581, respectively. That means 1.2% of the people returning have tested positive. In that time, they’ve had three system breaches. Crunching New South Wales’s numbers gives a failure risk of 1.9 per 1,000 positive cases and 2.3 per 100,000 travellers. So much less risk than New Zealand by either measure.

But if we look at the state of Victoria it’s a very different picture. They’ve had 33,300 returnees and 462 positives which gives them a similar positivity rate of 1.4%. But their lower absolute numbers, and the fact they’ve had 4 system breaches, gives them a failure risk of 8.7 per 1000 positive cases and 12 per 100,000 travellers. By those measures Victoria is 1.6 times riskier than New Zealand or New Zealand is 1.5 times riskier than Victoria. Take your pick.

What about the consequences?

I think if we’re going to talk about risks when it comes to border breaches, it’s worth reflecting on the consequences of those breaches. Here’s an excerpt from the study: “In Australia, 12 failures were identified, one causing over 800 deaths (Victoria’s second wave) and eight out of the 12 resulting in lockdowns. In New Zealand, there were 10 failures, with one causing an outbreak with three deaths, and also a lockdown.”

On this basis another headline could have been NZ’s MIQ system saved more lives and resulted in fewer lockdowns than Australia’s.

The authors summarise all the cases that resulted from each border breach in a table in their paper. Australia’s 12 resulted in the second wave in Melbourne (returned travellers infecting workers at the Rydges Hotel and the Stamford Plaza Hotel that resulted in 19,800 cases and 800 deaths), outbreaks of six, six, 13, 22, 26, 33, and 151 cases, and three instances where a single worker was infected. New Zealand’s 10 (it should be 9 as 2 of them have now been shown to be linked) are the Auckland August cluster (the origin of which is still unknown and which resulted in 179 cases and three deaths), outbreaks of one, three, three, three and six cases, and four instances where a single worker was infected.

As well as crunching the numbers, the authors include a table of 19 recommendations for how to improve Australia and New Zealand’s quarantine systems. Many are those Professors Wilson and Baker have been recommending for months now. Like capping or suspending travel from high-risk countries and shifting facilities to rural military bases or camps. I’m not a fan of either of those options. People have a right to come home, and facilities need to be staffed, and those staff have families who need to live somewhere and will require services like schools. And there are thousands of people working in our MIQ system so housing them and their families is not a trivial matter.

Other recommendations are already in place or in progress, such as improving ventilation in the hotels to reduce the chances of airborne transmission between rooms. Other recommendations are for improvements that are out of our control, like ensuring measures are in place at departure airports and transit hubs to minimise the risk that people will become infected. Given we’ve already had a green zone breach at Brisbane airport, it’s hard to imagine how we could insist on, or police, any measures at international hubs that connect Australia and New Zealand to the rest of the world.

The importance of vaccines

Looking at each of the breaches, Dr Grout and colleagues estimate that as many as half of them could have been prevented if frontline border workers had been vaccinated. That’s why border/MIQ workers were first in line once the Pfizer mRNA vaccine was found to be safe and effective and so approved and made available in New Zealand. It also explains why the very small number of workers who refuse to be vaccinated are not being allowed to remain in a post where they may be at risk of catching Covid-19. The risk to them and the rest of the country is just too great.

As Toby Morris and I have explained before, the managed isolation/quarantine system and vaccines are all part of our “Swiss cheese model” of Covid-19 defences. We know no single barrier or safeguard is guaranteed to work all of the time because they all have “holes” in them, like some types of Swiss cheese. We’ve recently had a reminder that while the vaccines have been shown to be very safe and effective, they might not work for a small number of people. And by sheer bad luck some of those people might work at our border.

That’s why it’s so important for all of us to be using the Covid Tracer app (don’t forget to enable Bluetooth in the app!) and to be scanning the QR codes wherever we go, as well as wearing a mask when required, and staying home and getting tested if we lose our sense of smell, or have any cold or flu-like symptoms, or develop a fever or have trouble breathing, or any of the other symptoms that could be Covid-19. And of course, getting the vaccine when our turn comes.

With the trans-Tasman travel bubble open, and the fact that many countries are still choosing to try to live with Covid-19 rather than eliminate the virus, we’re going to be relying on all our slices of cheese for a while yet.