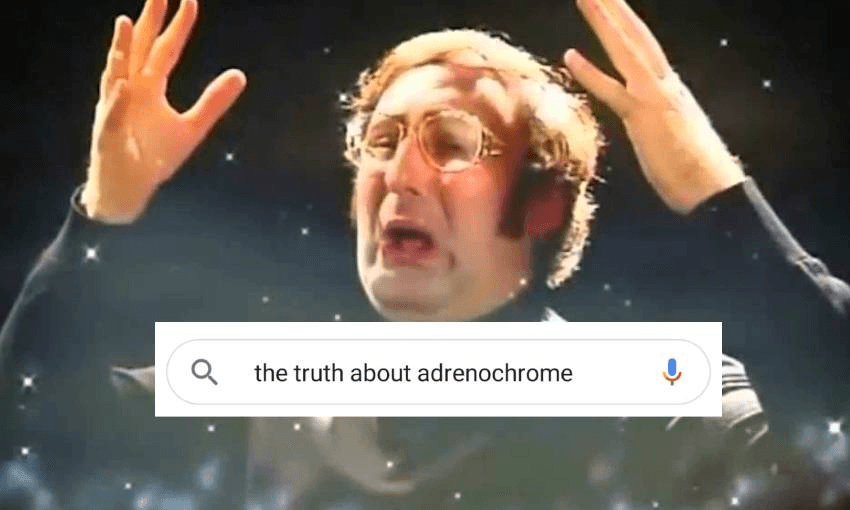 The Spinoff’s most-viewed article, by far, is an explainer about a drug that probably doesn’t exist. Josie Adams explains why a low-stakes story she wrote in a morning took flight.

In early April I wrote this story about adrenochrome, a chemical compound that doesn’t exist in any meaningful way, and how it became the centre of a QAnon conspiracy. Dubbed by another media outlet “Slenderman for boomers”, the adrenochrome conspiracy is that Hollywood/the liberal elite are torturing children to stimulate their bodies to produce adrenochrome, which is consumed by drinking their blood. Adrenochrome is either addictive or part of a Satanic ritual (opinions differ).

Yesterday, my explainer on it hit one million views*. It’s now comfortably the most-viewed piece in The Spinoff’s history, despite being irrelevant to most of our audience, or anyone else’s, really.

Have I considered the possibility I am the world’s greatest writer? Absolutely. But this is not my masterpiece. The article’s an explainer, short and straightforward. It’s not a long-form investigative exposé, or a whip-smart satire, or a heart-wrenching ode to Squirt the penguin for raising me when my father left. There’s no reason for a million people to have read this based on its merit.

It turns out they didn’t. They just clicked on an article that Google loved.

How many views are normal?

For me, a lowly staff writer with a focus on the music and e-scooter beats, a good story will rack up about 20,000 views in the month it was published. Next to the adrenochrome piece, my big-hitters have been this article about Mike Hosking and Duncan Garner being mean about a child (52,866 views) and this one where I ranked all the crew members on Star Trek (23,409 views). I said what I said about Neelix, don’t @ me.

The average story on The Spinoff gets around 5,700 views, according to media analytics tool Moz.com, the best average in New Zealand (Moz has the Herald at 3,000 and Stuff at 3,500, though both publish orders of magnitude more stories each day). The adrenochrome article is consistently hitting around the 300,000-view mark each month. In June, it got more than 385,000 views.

How are people finding it?

Around 93% of the views on “The truth about adrenochrome” come from Google, which is massively weird. Around 40-50% would be normal for my stories. Other views come from social media, or from people going to The Spinoff’s homepage and clicking around.

Readers found it using search terms like “adrenochrome queen”, “adrenochrome harvesting”, and “is adrenochrome real”. More than 60% of the article’s views came from the US. Almost 11% is from the UK, and Australia and Canada both took around 5% of the views.

Only 1.6% of the article’s views came from New Zealand, which means I have failed to deliver what the Spinoff Members want.

Hannah Kingston, a search engine optimisation (SEO) expert based in Melbourne, was kind enough to walk me through what I’d done. “Whether or not you knew what you were doing, you actually have a very good SEO-optimised article here,” she said.

Apparently I’d nailed basic SEO: I used “adrenochrome” as a keyword by including it in the title of the story, in the first 100 words, and in most of the headings. It’s got video, which keeps people on the page longer, so the rate at which people “bounce” (SEO/surfer dude jargon for “leave”) from the page is lower. The fact it’s broken up FAQ style is also a point in its favour.

Kingston said I’d hit on a rich views lode by writing on a theme that’s popular, with very little pre-existing content on it. Everyone Googling “adrenochrome” would be funnelled to my piece, because Google ranks The Spinoff as a credible site.

Here’s some multimedia to boost our views:

Why is The Spinoff considered credible by Google?

Kingston said search engines measure credibility by counting links to your site. For example, “The Age or The Australian cites The Spinoff, and they say ‘according to The Spinoff’, and then hyperlink to your site,” she said. “I reckon, and I don’t know because I haven’t dug into your data, The Spinoff would get cited quite a lot, and that would add to your credibility.”

While linking informs credibility, user experience informs linking. “Search engines aren’t sentient,” said Kingston. “They’re based on algorithms, and they can’t understand your content, whereas your users can.”

When users stay on the page instead of clicking back, Google thinks that must’ve been a good suggestion. What keeps a user on the page can vary, but Kingston’s seen some trends.

“Slick design, an interactive element, even having things like sign-offs that suggest you’re a real person,” she said. “Things like having pictures of the journalist, proving they’re humans.”

Sites that are ranked as credible linking to your site will up its credibility further; a shout-out from CNN is going to do more for your ranking than one from The Betoota Advocate.

Why did I get so much hate mail from people Googling ‘adrenochrome’?

I’ve got some emails since the story was published. One had the subject line “Lying CUNT”, with body text calling me a “yellow journalist POS [sic]”. One linked, as evidence that Hollywood is torturing children and drinking their blood, to YouTube videos by a man who falsely claimed to have invented email and believes vitamins each day keep Covid-19 at bay. He also called me a “progressive revolutionary feminist redistributionist equity championing sjw”, which is completely accurate, so swings and roundabouts, innit?

Most correspondence told me I didn’t know how to research, and that their children could do a better job than me. Research can mean different things to different people. For me, it’s peer-reviewed literature. For others, peer-reviewing is a sign that the research shouldn’t be believed, because that would mean it has mainstream approval. If research is accepted by Nature or The Lancet or espoused by doctors who haven’t been stripped of their credentials, then it’s paid for by corporate sponsors and is therefore propaganda. Sometimes that’s true, but I’ll still take Scientific American over Wikispooks, where “editors’ primary loyalty is to the truth as they see it”.

“It’s really, really easy to make something seem credible when it’s not,” said Kingston of the research rabbit holes some people are sent on. Those same things that make a page credible to readers – a face, a name, and multimedia – form the basis of social media. This is why Facebook and Instagram work so well to spread misinformation. David Farrier’s story on 5G is a great example of how a conspiracy rolls out.

“It comes down to the ease of spreading fake news, but also down to living in your own echo chamber,” said Kingston. “If you’re a conspiracy theorist, you’re probably going to seek out that content.” This formation of echo chambers could explain why it’s common to see multiple conspiracy theories intersect; as more people come into the chamber, more information is added to the conspiracy.

Should we take conspiracy theorists seriously?

It’s tempting to write these people off as a bit cooked, but they’re growing in number and in danger. Here in New Zealand, cellphone towers have been set on fire by 5G conspiracy theorists. In the Auckland viaduct last week, a woman was arrested for trespassing as she boarded a vessel searching for evidence Ghislaine Maxwell was there.

“Paleo” Pete Evans was on Art and Matilda Green’s podcast this week (now deleted) explaining that “no one’s talking about the immune system” (objectively untrue) as though eating vitamin A will supercharge your blood cells to the point where they repel Covid-19. “I think this whole fucking thing is a hoax,” he said of the current pandemic, which he calls a “scamdemic” on his Instagram account.

Some very influential people believe some very dangerous things, but from what I’ve seen there aren’t many of them. I got the same amount of hate mail for my Star Trek article last year, which has 2.4% of the views adrenochrome got. That’s a good hate-to-indifference ratio.

The minority who were upset by it accused me of being paid to write, which is true, because it’s my job. I’m a shill for Big Spinoff. But if I had the money to quit my job and become a sovereign citizen journalist dedicated to shining light into the dark, I would still write “The truth about adrenochrome”, because the truth is often really boring, and people should know that.

Update: As of 28 March 2021, ‘The truth about adrenochrome’ has reached 2.2 million page views