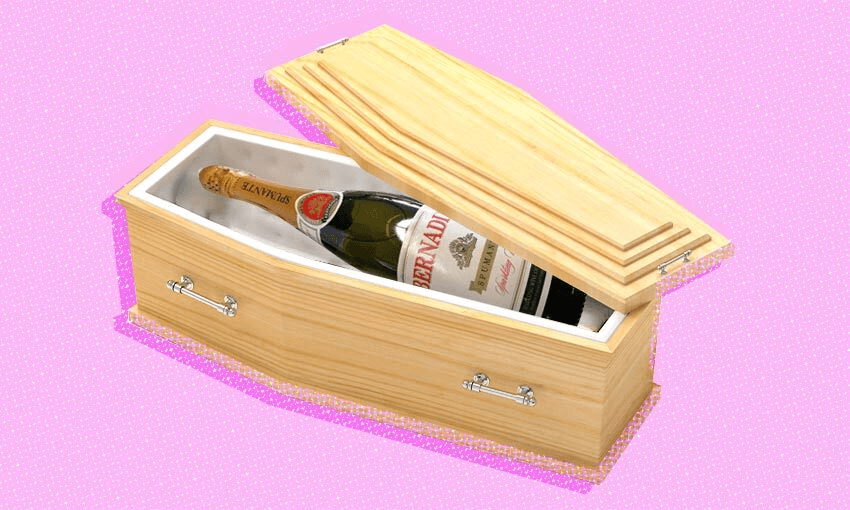 As the news breaks that the spew-inducing spumante of her youth is being discontinued, Emily Writes reflects on the end of an era.

The year is 2001. You’re wearing a denim mini from Glassons with the waistband cut off so you look like Mariah Carey. ‘Heartbreaker’ came out two years ago but you live in New Zealand so it took a while for the look to get here.

You’ve got a matching denim jacket and a satin pink handkerchief top and you’re wearing Ecko skate shoes even though you’ve never used a skateboard in your life. Your hair is perfect, with two slick slut strands sneaking out from an extremely severe ponytail. You’ve got your G-banger pulled high over your hips and popping out of your clear plastic handbag with the wooden handles is a bottle of sophistication – Bernadino.

Life is good. You’re ready for a huge night out.

I can’t even begin to tell you how many teenage nights I spent absolutely rat-arsed on Bernadino. In my clique it was the drink of choice. It’s true, it wasn’t as classy as Aquila or as cool as Alizé – but it would definitely fit in a pump bottle so you could drink it at the movies while Dan tried to grope your boobs with all of the finesse of a gorilla learning sign language.

It was a drink you could convince your friend’s creepy older brother to buy for you. It was a drink made for those under the age of 18. There wasn’t one scenario where it wasn’t the perfect liquid companion – 15th birthday, 16th birthday, Friday, Christmas in the Park, getting finger-banged at the school dance, church camp… the list goes on.

And now, it’s gone. And with it – the final vestiges of our youth.

Lion New Zealand confirmed the death of the near-toxic fizzy. The sparkling garbage drink of choice for turn-of-the-millennium kids, Bernadino is now flushed away, like so much sweet vomit.

I remember the first time I drank Bernadino. It was joyous.

I remember returning to it in my 20s because I wanted to taste that nostalgia. I wanted to return to my teen years. It didn’t taste like youthful freedom though. It tasted absolutely like what I imagine piss tastes like. How did we ever drink this shit? (I thought to myself before chugging down some Lindauer Fraise).

I am now almost an adult and so I drink rosé like the cliche that I am, and prosecco if I want to be fun (which is rare). But my memories of Bernadino linger. Just like the vomity aftertaste after a night on the Bernies.

It was a time when everything felt possible but also nothing was actually possible. We were young and dumb. And absolutely full of… teen angst. Bernadino was the place we turned to when our parents were being fucking bitches or the after-hours was closed and we really needed the morning after pill. Bernadino was our friend when Shanna didn’t invite you to her birthday even though you were meant to be best friends. Bernadino was there when The Big Kumara had a new bouncer who didn’t believe you were a Russian 42-year-old called Svetlena. Bernadino was there when you failed Year 12 maths. Bernadino was your companion, gently thrusting you into New Zealand’s problem drinking culture.

And then suddenly, you just stopped drinking it. And probably never thought about it again.

Did we suddenly realise what it tasted like? Did we suddenly have money? Whatever the reason, once Bernadino left your life it didn’t come back unless you were pulling the labels off bottles of it and replacing them with other labels to put on the tables of family you didn’t like at your wedding.

We progressed. Time marched on. No longer did we fill buckets with Bernadino and red cordial and call it punch. We took our steps toward a brighter future.

Of “bubbly” that was $4 more expensive.

Of red wine at some point but I’m not there yet.

Of becoming someone whose entire personality is that they don’t drink any more.

No more Aquila, no more Passion Pop, no more Bernadino.

Goodbye to our youth. Hello to drinking in probably exactly the same way but now we get hangovers.

We have just memories left (sort of, it’s all a bit hazy).

Farewell, Bernadino, and rest in peace. In all fairness, we probably won’t miss you.