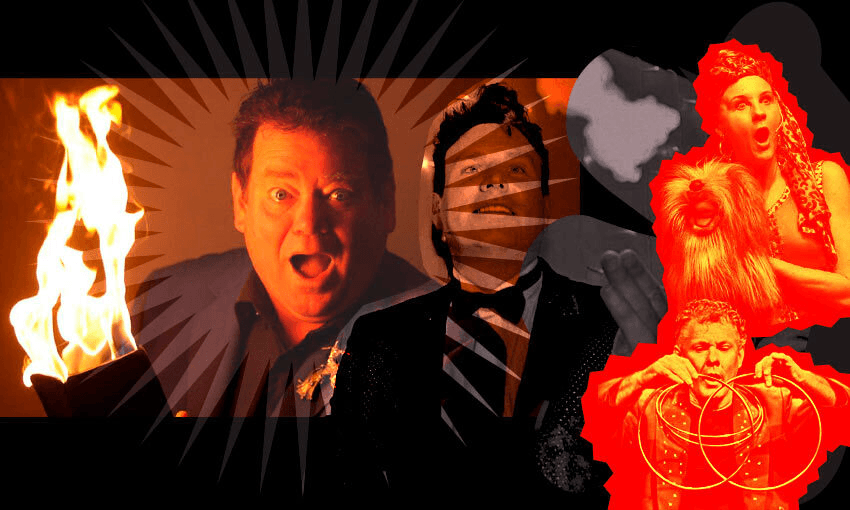 This year Aotearoa’s only organisation for professional magicians celebrated a landmark birthday. Sam Brooks talked to a few of the magicians inside the Brotherhood of Auckland Magicians to get a sense of what its like on the inner sanctum.

If you happen to be at the Surrey Hotel in Grey Lynn on the second Tuesday of the month at around 7.30pm, you’ll find two of the doors in the restaurant securely shut. Behind those doors, a motley group of people meet to discuss the craft, the art, and the passion that has driven them for many years: magic.

That group is actually an organisation called The Brotherhood of Auckland Magicians (abbreviated to the appealing “BAM”). BAM traces its beginnings to 1946, when Peter Fraser was prime minister and Rita Hayworth pinned up on walls across the world; it celebrates its 75th birthday this year. BAM’s goal: To “promote goodwill, mutual respect and cooperation amongst active performing magicians”. It’s one of many clubs for professional magicians that exist across the world, but is the only club of this nature in Aotearoa.

Just before Auckland entered its lockdown, I spoke to then president Alan Watson QSM and his successor Mick Peck behind those closed doors, to get a sense of what it’s like to be a member of this exclusive organisation.

“We have a focus here on just professionals. It’s the top magicians, and as such, we’re all friends here,” says Peck. “If you’re a hobbyist or just learning how to do magic, then you can go and join those other clubs.”

The interview happens under the watchful eye of David Hartnell MNZM (always MNZM), New Zealand’s gossip oligarch, lifelong devotee of magic and BAM’s patron. He’s also the organisation’s most prominent advocate, and arranged for me to get access to that inner sanctum after I profiled him earlier this year.

The thing that strikes me first is how naturally Watson and Peck shift into performance mode; these are people who know how to charm an audience and win them over, through hook or by crook. In this case, I’m the audience, and I’m immediately won over. (The hook? Peck tells me, with a genial smile, that my shoes are made for performing. I could be a star in shoes like these.)

That seamless shift into stage-style patter speaks to the thing that separates BAM from other similar organisations – it’s the only club specifically for professional magicians. It has an Outer Circle, made up of magicians of “good character 18 years or older with a proven interest in performing magic” who have to be recommended by an existing member. Then there’s the hallowed Inner Circle, which only includes magicians who have proven themselves to be “of a high standard of performance; demonstrable by such things as individual style, specialty acts, originality and showmanship,” according to their site.

Beyond that, there’s the Grand Master of Magic, which has only been awarded 19 times (including to Watson) since its introduction in 1969. The recipients must be performers of a “high standard” but other contributions to the field, like giving time and expertise to magic organisations or originating magical effects, are also taken into consideration. The main requirement, though, is that “Above all they are people who have served magic well, have graced our art and made a special contribution over many years.”

That rigidity isn’t just for purity’s sake. There’s a practicality to it: if your act can’t impress magicians, how is it going to be able to impress the public? “We want to see an act that you would be out there in public, getting paid for and making people happy. So it has to be a professional act,” says Peck. “If you’ve got a script, you have to know your script, obviously. The tricks have to be done flawlessly. You can’t be flashing something and have it not go right.”

The rules on admission seem surprisingly strict – you can only make it into the Inner Circle, for example, if your nomination garners “no more than two objections” – especially considering the warm nature of the magicians I’ve talked to, and the cosiness of their chosen meeting space, the rustic Surrey Hotel. If you peel away those rules and the requirements, however, you see the heart of the Brotherhood: it’s a place where people who love magic enough to make it their life can be among each other.

While the Brotherhood might have been the destination, the pathways into it, and into magic, are varied. Peck’s story is a fairly standard one: he started doing magic when he was a child, after watching superstar magicians like Paul Daniels and David Copperfield on TV, and eventually his interest led to him being identified among his friends as “the guy who does magic”.

Watson came from a family of magicians. His great, great uncle was performing during the first World War, and he passed the metaphorical wand onto Watson when he was seven.Watson says he’s now passing that love of magic to his own daughters.

The origin stories of two other members of the Brotherhood I spoke to fall somewhere in between. Brent McLeod had a burgeoning interest in magic a teenager that led him to ordering effects – never call them “tricks” – from De Larno’s, the Christchurch magic mecca that closed in the mid 1990s. Paula Wray, currently the only female member of the Brotherhood, moved to Auckland to become an actor, ended up learning some magic from an acting-class colleague, and caught the magic bug.

The word that comes up constantly when discussing the Brotherhood is “collegial”. It’s an old-fashioned term, but it fits the organisation well: that cosy room at the Surrey Hotel is a place where these magicians can come together, not just to socialise but to, arms metaphorically linked, uplift the artform of magic. This is especially important given that magicians rarely see each other perform because they’re often doing their own gigs.

McLeod believes this aspect of the organisation is crucial. “It’s nice to have people, if you think you’re doing something really well, to give you the basic truth of your act – telling you if something is a bit long, not quite right, or if you’re flashed a bit of something.”

“We were always striving to do something new, which was great,” says Wray, who has since moved to Hawke’s Bay. The monthly meetings gave her a sense of purpose, as well. “It gave us material that we could put into our shows. It’s the worst thing performing for other magicians, but I got over that because we just wanted each other to do really well.”

Beyond the opportunity to hone their skills, for BAM members the meetups are about the simple need for connection, to be among people who are like you, and heading in the same direction as you. “It can be a bit of a lonely existence being a magician,” says Peck. “Just being in show business, you go out, you do your show, you’re the big hit. Everyone loves you, and then that’s it.

“What we can do here is go and do our shows, then one night a month we come here and we’re all friends. We can talk about the good shows, the bad shows, and where things went wrong. We all leave our egos at the door.”

At the end of our conversation, Watson asks if he can look at my phone. I hand it over to him, and he inspects it. It immediately starts smoking, and I freak out a bit, despite having been in the presence of two magicians (and their patron) for nearly an hour. Watson winks and hands my phone back to me, unharmed. I look at Peck and Hartnell, who are surely as delighted by this effect when seeing it for the hundredth time as they were the first.

When the Surrey Hotel’s doors shut behind me, they’re not shutting on a secretive, exclusive, shady organisation. They’re shutting on friends and comrades whose passion has brought them together not just in service of an artform they love, but of an audience they live to entertain.

In that moment, Watson showed me what the Brotherhood of Auckland Magicians, and magic, is all about: the irreplaceable warmth of believing something that cannot possibly be real, is real.