The people who clean managed isolation facilities are doing an essential frontline service. But many are making little more than minimum wage, reports Michael Neilson for the NZ Herald.

Tina Eitiare works at the frontline of New Zealand’s Covid-19 response while supporting her family, and yet earns just 25c an hour above minimum wage.

Eitiare is one of hundreds of workers doing the high-risk work of cleaning managed isolation and quarantine (MIQ) facilities up and down the country, while earning the minimum wage of $18.90 an hour or slightly above. The government last year announced all contracted cleaners, security and caterers would be paid the living wage of $22.10, but crucially this did not include hotel staff, employed and paid for directly by the hotels.

Eitiare, 49, has worked as a hotel cleaner for the past 19 years, over that time raising seven children, while also struggling to pay the mortgage on her family home. She’s skilled and can manage other workers – and best of all, she loves her job.

But over the past year, her responsibilities and sacrifices have increased greatly. Her hotel, which the Herald has agreed not to name at Eitiare’s request, is one of 32 providers across the country operating as a MIQ facility.

Each day Eitiare goes to work she must don full-body personal protective equipment (PPE). She’s learned “deep cleaning” and sanitising, to work in a manner that protects herself – particularly as an asthmatic – and others.

She is regularly tested for Covid-19 and each night when she returns home she puts her clothes in a plastic bag, washing them separately. She showers before seeing her three children who live in the same property, but in a separate building to reduce the risk of contamination.

But despite all the caution, each day she goes to work is another filled with fear and anxiety. And despite all of this extra burden, the cleaner of nearly 20 years’ experience earns barely more than the minimum wage of $18.90. In fact, she earns less than when the pandemic began – her hours have been cut from 40 to 30 a week, meaning her pay cheque hardly covers the mortgage. She has a 10-year-old daughter at home, and two adult children who support with mortgage repayments and household bills.

“In the long run I am scared we might lose the house, lose the ability to live in the area with family nearby. I want my children, when I die, to have somewhere to stay.”

Eitiare said many co-workers were in even more precarious positions. “Some are down to 20 hours a week, on minimum wage, and the sole earners supporting their families. With rents, food costs, petrol so high, people are really struggling to survive.

“I just want to cry. We work hard, we are going through so much more than before, and we deserve to get something extra.

“We are risking our lives, our health, to put food on the table and that is the reason we do it.”

Hotel laundry attendant Mel Jones, 30, is on the minimum wage, and has been for more than a year, despite her role changing immensely.

“We were never trained for high-risk situations, yet now we are working in an epidemic, deep cleaning, sanitising, becoming very specialised cleaners but not being compensated for it.”

Her hours had been reduced since the first lockdown, and taking into account her studio apartment rent, bills, food and transport, she had very little money left over. Because of the danger and the anxiety and stress of her job, her social life has been severely affected. Whenever she was in a public space, including on the bus to work, she was paranoid about being “the MIQ worker who spread Covid-19”.

“Now I need to be very mindful in how I interact with people, as I am working in a very risky occupation.

“Life is like being at level four all the time.” 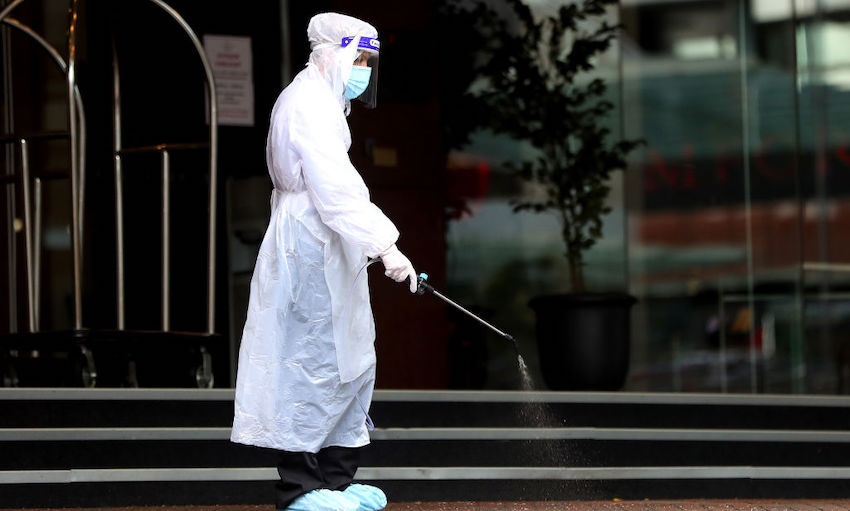 A hotel staff worker sanitises the outside of Stamford Plaza on July 10, 2020 in Auckland. (Photo: Hannah Peters/Getty Images)

Unite Union estimates about 500 people in similar work in MIQ facilities are being paid less than the living wage – most earning minimum wage. Most of these workers are women, most non-Pākehā, and many from recent migrant communities.

The existing contracts between the government and MIQ facilities provided a set payment to cover all costs, including cleaning. However, these contracts did not outline specifications on pay for cleaning staff.

In recent weeks several hotel chains had announced they would pay employees doing MIQ work at least the living wage. Accor staff and those at the Jet Park facility had recently begun getting the living wage. Rydges Auckland had increased staff pay, and Crowne Plaza Auckland, currently an MIQ facility, announced from February 24 all staff would be paid the living wage while under government contracts.

Unite Union national secretary John Crocker said now almost 50% of hotel workers were being paid the living wage, or close to. They were pleased Crowne Plaza Auckland was finally recognising staff’s hard work, but hundreds of workers in MIQ facilities were still earning below the living wage. The Herald contacted about a dozen but most did not respond by deadline.

Les Morgan, a spokesman for Sudima – which has hotels in Auckland, Rotorua and Christchurch – did not answer questions about pay for staff. However, he said they were working with the government around contract extensions, which he hoped would “allow us greater flexibility with remuneration and wellbeing packages for all team members on a permanent basis”. 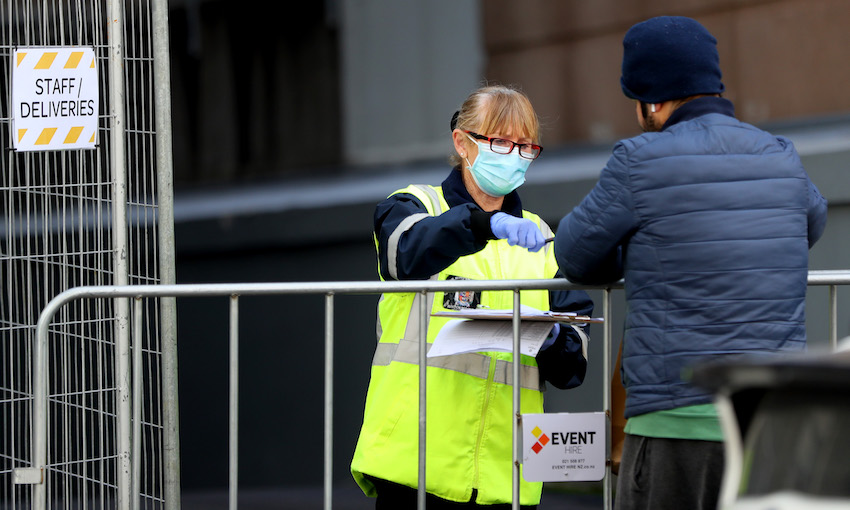 A security guard takes a delivery outside Auckland’s Rydges Hotel, which is being used as a managed isolation facility, on July 10 (Photo: Hannah Peters/Getty Images)

Crocker said MIQ contracts are set to be renewed next month, which would give the government an opportunity to add a condition that hotel workers were paid at least a living wage from then. Many healthcare workers in MIQ facilities who were part of the New Zealand Nurses Organisation were also earning below the living wage, Crocker said.

E Tū union also represents hotel workers in MIQ facilities. Organiser Mat Danaher told the Herald his organisation viewed cleaning staff as health workers and the MIQ locations as health facilities and that they should be paid fairly for this dangerous work.

“This is unacceptable, they are health workers providing frontline defence to our country. They are required to take big risks, especially with some of the new variants of Covid coming through to enable our society to function, and Kiwis to come back home.

“We believe their wages need to reflect the value of their role, and that means the living wage is the least that should be paid.

“If hotels are not paying it themselves then the government needs to step up and instruct them to pay it.”

Anna Ingleton, a spokeswoman for the Ministry of Business, Innovation and Employment – which handles the MIQ contracts – said they had asked all contracted providers whether staff were being paid at least the living wage.

“We continue to pursue this outcome with the remaining hotel providers.”

As MBIE’s contracts were renewed more assurances would be sought about living wages being paid, she said.

This story was first published on the NZ Herald. Subscribe to Herald Premium here.