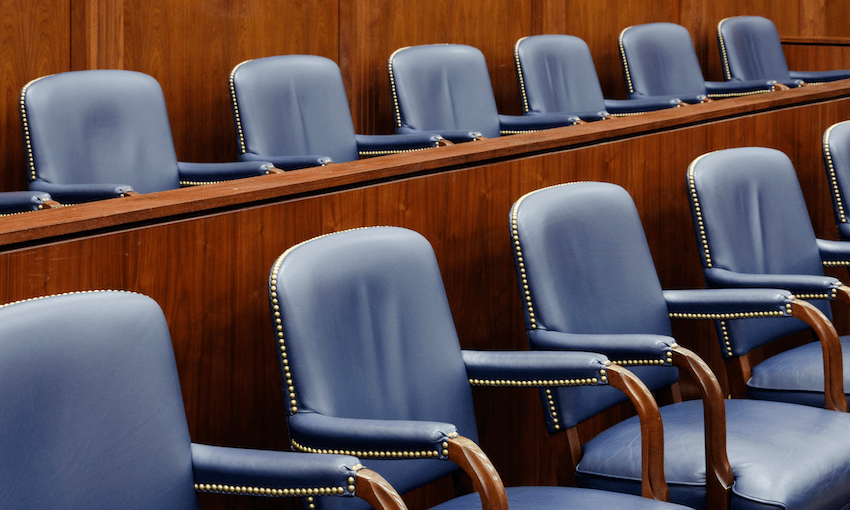 Our juries are as broken as we are

Peter McKenzie examines New Zealand’s jury system through an astounding piece of research out of Victoria University of Wellington. His conclusion? The cracks run deep.

At one point in Twelve Angry Men, cinema’s greatest legal drama, Juror 11 remarks, “This I have always thought is a remarkable thing about democracy – that we are notified by mail to come down to this place to decide on the guilt or innocence of a man we have never heard of before. We have nothing to gain or lose by our verdict. This is one of the reasons why we are strong.”

His statement is heartwarming; the movie equally so. It focuses on the “normal” men in whose hands rests the fate of a boy accused of murder. The evidence against him is inarguable. One neighbour witnessed the killing from a distance; another heard the body hit the floor and saw the boy run away. He had a history of violent crime and owned a switchblade identical to the murder weapon.

The 12th juror, Davis, slowly whittles down the confidence of his 11 colleagues. The neighbour who “saw” the killing couldn’t have: she wasn’t wearing her glasses. The other couldn’t have seen the boy run away: he had suffered a stroke and couldn’t have moved to the door fast enough. And anyone could have bought that type of switchblade at the local pawnshop. Eventually, all 12 vote not guilty. It’s a moving display of a jury’s power.

But recent research suggests that in real life it’s a power not always exercised so justly.

Robbie Taylor, a PhD Candidate at Victoria University of Wellington, recently completed his thesis on the influence of biased line-ups and unanimous eyewitnesses on jurors. In Taylor’s study, mock jurors read about a hypothetical crime and saw a police line-up from which they were told varying numbers of witnesses had identified the (innocent) defendant. The mock jurors then rated the defendant’s guilt.

What Taylor found was stunning. The greater the number of witnesses who identify the defendant as the perpetrator, the greater the likelihood the jurors would deem the defendant guilty – even where the line-up was obviously biased (for example, where one person has a scar but the rest do not). According to Taylor, “The number of witnesses seems to overcome the fact the line-up was biased; they don’t seem to understand the bias caused the consensus.”

It’s the latest in a line of research which suggests our criminal justice process is less reliable than one might hope. That’s because the memories and people which the process relies on are far frailer than we realise.

As Elizabeth Loftus, one of the 20th century’s most influential psychologists, has observed, “Our representation of the past takes on a living, shifting reality. It is not fixed and immutable, not a place way back there that is preserved in stone, but a living thing that changes shape, expands, shrinks, and expands again, an amoeba-­like creature.” (Loftus’ application of her research is controversial; she has testified about it in cases like that of Harvey Weinstein). But despite memory’s malleable nature, most witnesses and juries continue to misunderstand it as something closer to a reel of film, fuzzily playing back events exactly as they happened.

Just as worrying, the people who assess the reliability of those memories are themselves biased and personally attached. Partway through Twelve Angry Men, Juror 10 begins to rant. “This kid on trial, his type – don’t you know about them? There’s a danger here. These people are dangerous. They’re wild!”

His prejudice was explicit. More common is implicit bias; the social programming we develop at a young age which prompts us to consider certain groups with suspicion and others with respect. As Sonali Chakravarti, an associate professor of government at Wesleyan University, wrote in a recent article in the Boston Review, “Past experiences, political ideologies, and cultural priming shape how we understand events – no one can be truly impartial when asked to judge acts of intense violence and emotion.”

Each year, the District Court holds approximately 2,000 jury trials. And each year, these systemic weaknesses almost certainly cause miscarriages of justice. In 2006, former High Court judge Sir Thomas Thorp published a report indicating that there are likely 20 innocent New Zealanders in jail at any one time. The cases of most go unnoticed and unaddressed.

After decades of campaigning, last year the government established a Criminal Cases Review Commission to examine potential miscarriages of justice. It’s a glimmer of hope for the wrongly convicted. As an analogy, between 1999 and 2020 the Scottish Criminal Cases Review Commission recommended that 120 cases be reconsidered by the courts; two thirds ended in successful appeals.

But this is a remedy, not a solution. It will do little to address the root causes of miscarriages of justice, which Taylor touches on in his research. And neither are there easy answers. According to Taylor, “The research that exists about judges is not much better! So we’ve got a real problem here.”

In Twelve Angry Men one juror says to Davis, “If you want to hang this jury, go right ahead. The kid will be tried again and be found guilty, sure as he’s born.” In the movie, the well-meaning Davis nevertheless saved the day.

But while speaking to Taylor, I couldn’t help but wonder: What about all the well-meaning jurors who were nevertheless overwhelmed by the system’s weaknesses? What happened to the defendants they deemed guilty?