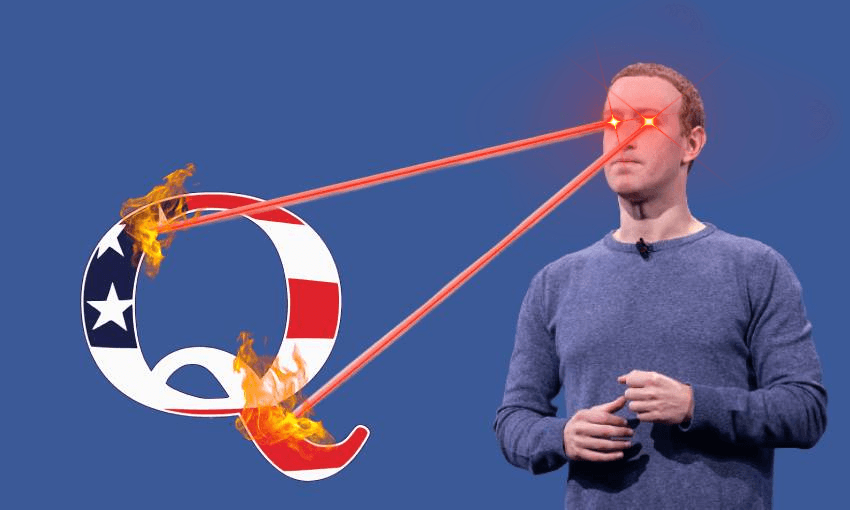 How QAnon took over Facebook, and why Zuckerberg just dealt it a massive blow

Facebook has announced a ban on the conspiracy network QAnon from its platforms. What is Q, and why does Mark Zuckerberg want him gone? We explain.

QAnon is a far-right conspiracy theorist group focused around the idea that Satanic cabal is torturing children and attempting to create a new world order. People in the group believe that its mysterious leader, Q, has inside knowledge of the workings of the US government and that President Trump is preparing to bring forth an event called “the storm” which will result in the destruction of this cabal.

Its members are spread throughout the world and across every demographic from social media influencers to political candidates.

In May 2019, the FBI officially identified QAnon as a domestic terrorist threat. Just last week, the US House of Representatives voted to condemn the group and reject its theories. To those in QAnon these actions are only taken as evidence that their cause is righteous.

To most people, condemnation is a reasonable response considering people who subscribe to the conspiracy theory have attempted to assassinate Canadian prime minister Justin Trudeau, used armoured vehicles and assault rifles to takes stands against the US government, and are spreading dangerous misinformation about Covid-19.

While QAnon began on the imageboard website 4chan, its influence is almost entirely due to its popularity on social media. That’s how it has spread through every level of US society, and how it landed in New Zealand. You’ve probably seen relatives or acquaintances post Facebook statuses about 5G and vaccines, Instagram stories about the “Plandemic” – which claims the coronavirus was manipulated to go viral – or the Covid-19 denial-heavy live streams from members of the Advance NZ party.

Members of QAnon rely on social media to get their message to new audiences. The dangers of child trafficking are an obsession for the group, and by using hashtags like #savethechildren QAnon can terrify parents of young children scrolling through Facebook and make them stop to read more. From there, it appears to be small step to believing in a widespread child kidnapping ring and that the Auckland viaduct is being flooded with cyanide.

The QAnon-rooted “Wayfair conspiracy” which went viral on Instagram and Facebook earlier this year claimed cupboards sold by the Wayfair furniture company that had been given girls’ names in fact contained kidnapped children, who were being sold via the website. It’s not true, but more importantly the conspiracy’s popularity meant a US human trafficking hotline was overwhelmed with complaints about Wayfair, preventing people who really were in danger from getting help.

Here in New Zealand, the cellphone tower arsons earlier this year have been linked to anti-5G conspiracists; 5G conspiracy theories are part of QAnon’s grand narrative, but it’s not known whether the arsonists are in QAnon themselves. In addition, anti-lockdown protests have a strong link to the QAnon-endorsed “plandemic” concept.

How strict is the ban?

For Facebook – very. In August, Facebook said it would restrict the promotion of “militarised social movements” and QAnon from its platform. In the first month of this policy, it removed more than 1,500 pages and groups related to QAnon and containing discussions of potential violence. More than 6,500 further groups and pages were removed pertaining to 300 other militarised social movements.

This week, the social network said it will outright ban QAnon. “We believe these efforts need to be strengthened when addressing QAnon,” Facebook said in a statement. “We will remove Facebook pages, groups, and Instagram accounts representing QAnon, even if they contain no violent content.”

The hashtag #savethechildren will also be targeted by Facebook’s team. When someone searches for the phrase, Facebook says it will direct them to credible child safety resources. A quick search today didn’t turn up this message, but QAnon posts bearing the slogan also weren’t visible; any that did remain were largely limited to posts criticising French Netflix show Cuties.

On Instagram, QAnon-related content that has been debunked by the company’s fact-checkers will be filtered out of the “explore” page. If anyone finds the content, it should be clearly labeled with context.

What motivates misinformation? In the third episode of Conversations That Count – Ngā Kōrero Whai Take, we attempt to find out. Subscribe and listen now via iTunes, Spotify or your preferred podcast platform.

Where else does QAnon exist?

Keeping QAnon off Facebook and Instagram should slow the network’s spread, but it won’t kill it. Social media appears to be used more for recruitment to the network than management of it.

The group was born out of the Pizzagate movement, and in 2017 someone called themselves “Q” started posting on 4chan, a website best known for being the birthplace of the “hacktivist” group Anonymous and the art of Rickrolling.

“Q” claimed to be a member of the US government with a high security clearance (“Q clearance”), and that he was leaving clues (“Q drops”) on forums about Trump’s plan to destroy the deep state (“the storm”) so these concerned citizens could help.

He and his followers soon left the depths of 4chan for Reddit, where they were repeatedly shut down for doxxing and inciting violence. “Q drops” began to be made on 4chan successor 8chan (now known as 8kun) and aggregated on websites like QMaps, but the promulgation of the conspiracy theory moved to social media – Facebook and Instagram, mainly – and to very slightly more covert apps like Telegram. QMaps was shut down in September this year, but drops continue to be posted to 8kun.

Can Mark Zuckerberg stop ‘the storm’?

If anyone has the resources, it’s him. But with 2.7 billion active monthly users on Facebook, and the website’s rules largely enforced by users flagging content instead of employees actually searching for it, the ban may not be completely effective. And, again, dismissal by figures of authority only validates QAnon’s belief; the ban won’t change their minds about the conspiracy.

It’s also hard to stop “the storm” when “the storm” is the current president of the US. While Trump is likely not a member of QAnon, some have criticised him for giving it the oxygen of publicity. When asked during a press conference for his opinion of the group he said, “I understand they like me very much, which I appreciate”. He’s also retweeted QAnon followers.

What happens when an unstoppable force (the storm) meets an immovable object (Facebook)? Something horrible, probably.