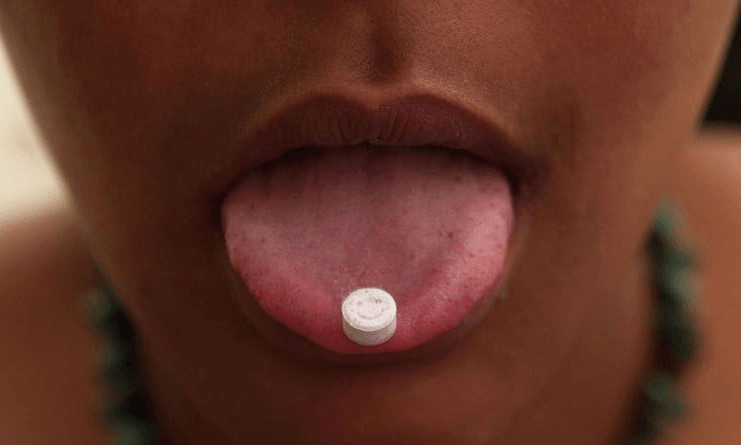 There’s some strong ecstasy going around, so we need to make pill testing easy

A surprisingly strong batch of MDMA has arrived on our fair shores. We know people are going to take it, so Wendy Allison, founder of pill testing organisation KnowYourStuffNZ, says we need to make harm reduction easier.

Historically, when people have taken “ecstasy” in New Zealand it has not usually been MDMA. It is by far the most common substance people think they’re bringing to KnowYourStuffNZ in our four years of testing at events. In our first year only 20% of what we tested actually contained MDMA.

But recently it’s making a comeback – last year 75% of MDMA samples were what people thought they were. In another new development, we’ve seen significantly more pressed pills compared to crystals in capsules. And some appear to contain multiple doses of MDMA.

Our technology (reagent testing and FT-IR spectroscopy) cannot measure dosage, but if content analysis shows mostly MDMA in a heavy pill, we can make an educated guess that a larger than usual dose of MDMA may be present. This season we’ve seen several pills weighing up to 580mg in which the main ingredient is MDMA, suggesting potentially two to three times the average dose.

The risk here arises from the perception that one pill equals one dose, and the practice of ‘bumping’ with another dose to prolong the effects. With higher dose pills, this becomes very risky. An average MDMA dose is considered relatively low risk, but higher doses can produce serotonin syndrome, leading to dangerous increases in body temperature and potentially, death.

While one in four samples contained no MDMA, the most common and worrying substitute in ‘MDMA’ lately is cathinones. Commonly known as bath salts, cathinones mimic the effects of MDMA but do a poor job. If someone unknowingly takes a cathinone and doesn’t get the expected MDMA feelings, they may assume they had a dud pill and take more. Cathinones have quite varied active and toxic doses, so even a single dose can put users at risk of inadvertently overdosing.

New cathinones are being synthesised every year. We’ve identified six different cathinones so far this season, including n-ethylpentylone which has been implicated in hospitalisations overseas, and another that is so new it’s not in our databases. Almost nothing is known about these new drugs so we can’t provide useful harm reduction information other than to advise people not to take them.

Legal drugs such as alcohol are labelled with content and dosage, so people know exactly what they’re getting and how much.  Drinkers can make informed decisions about how to use them more safely. With illicit drugs, these things are a mystery – testing fills that gap.

Testing has a twofold impact – it helps individuals make safer decisions about drug use, and it alerts the drug-using community to current risks in the market. KnowYourStuffNZ provides facts about the content of a sample, along with information about dose, duration, psychological effects, conditions in which use should be avoided, and danger signals. People can use this information to make risk-reducing decisions. And they do – half of clients choose not to take a substance that’s not ‘as advertised’, and our clients tell us that they approach even familiar substances more cautiously after testing.

But we are forced to operate in the shadows. Pill testing isn’t explicitly either legal or illegal. But knowingly permitting drug use in a venue is illegal under Section 12 of the Misuse of Drugs Act 1975 (MoDA). Events who engage us are acknowledging that people use drugs there, which makes the organisers vulnerable to prosecution, prison, loss of insurance, and withdrawal of land use permits. Because of this we can’t inform people which events we’ll attend or advertise our presence, meaning many people never know we’re there.

Meanwhile, the Health and Safety at Work Act 2015 makes event organisers personally responsible for taking all practicable steps to keep their participants safe – pill testing is a very practicable, economical and effective step to improve safety. Yet because of the MoDA, organisers must pretend they don’t know drug use is happening. This situation is, frankly, ridiculous.

Pill testing is common at events and clubs in the US, UK and Europe. Organisations like Dancesafe in the US, Energy Control in Portugal, and The Loop in the UK operate openly. This has resulted in reductions in drug-related hospitalisations, early warning systems, and raised awareness of harm reduction among drug users. Contrast this with Australia, where pill testing keeps being stymied and harsh enforcement is the norm, resulting in a number of drug deaths at recent events.

The 42-year-old Misuse of Drugs Act is not preventing drug use or drug harm, therefore it’s not fit for purpose. Luckily it’s up for review soon.

At a minimum, we would like pill testing at events to be explicitly legal. More broadly, substances should be reclassified using evidence of harm and funding should be redirected from criminal enforcement to health education, harm reduction, and treatment.

If the aim really is to reduce harm, the government needs to acknowledge that people use drugs, end prohibition and the associated illicit markets, and create regulation that includes quality control and labelling just as we have with legal drugs such as alcohol and coffee.

While we’re waiting for the ideal world to materialise and put us out of a job, we’ll carry on testing pills to avoid completely preventable deaths in our community.

One role the police have outside of enforcement is ‘Safer Communities Together’ – empowering communities to take a role in their own safety. Harm reduction fits well with this role, and we’re keen to explore ways of collaborating with them on this.

Our National Drug Policy is harm reduction focused, and the police have discretion in handling minor possession offences. This enables them to use discretion in how they approach pill testing. They could theoretically also take possession of any samples we identified as potentially deadly (such as fentanyl) and deliver them to better equipped labs for further testing.

We have effective relationships with event medics, alerting them to substances of concern and better equipping them to deal with medical situations involving drugs. More understanding of drugs leads to more compassionate interactions. While our current law stands, the police role in this is limited; once the law catches up with policy they could provide strong support for harm reduction services.

No drug use is completely safe, however we recognise that some people are willing to take risks to have a good time. To reduce the risk:

Remember a quarter of MDMA is not as presumed. You can’t tell just by looking. Test before you ingest.

There are high-dose MDMA pills out there – one pill is not necessarily one dose.

If intending to take a substance of unknown content and purity (which is all of them), only take a fraction, and wait at least an hour before taking more. Don’t snort unknown substances.

KnowYourStuffNZ operates in partnership with the NZ Drug Foundation. To contribute to their work visit their website.