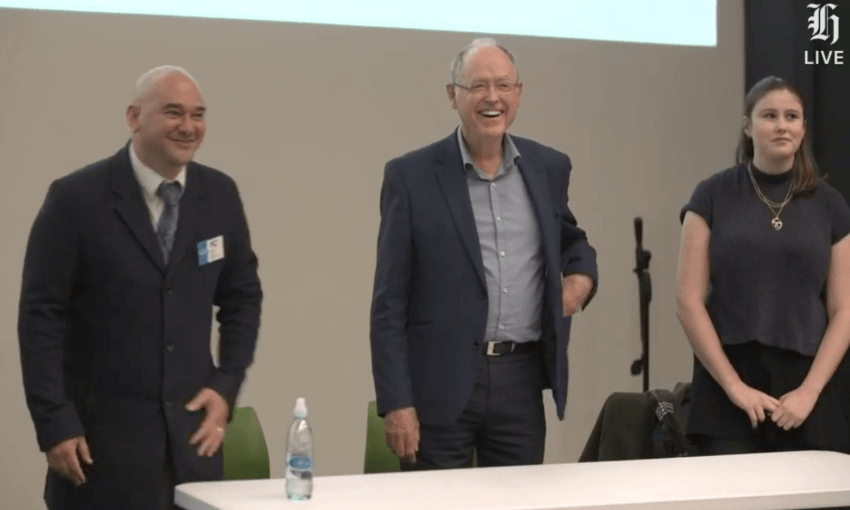 And the winner is: Don Brash, by a mile

An otherwise unremarkable Auckland University debate on free speech and PC culture turned into a cause célèbre when one of the participants, Don Brash, was banned by Massey University. Madeleine Chapman tunes in to the livestream.

The head of the University of Auckland debating society, introduced only as Chris, repeated himself five times. Don Brash had moments earlier walked onstage to a chorus of cheers, boos, and the waiata Te Aroha, sung by those who weren’t keen to hear him speak. But they were there and the very purpose of the debate had, in the week prior, morphed into Let Don Brash Speak.

The moot was PC culture has restricted free speech in New Zealand.

Elliot Ikilei, New Conservative Party leader, spoke first for the affirmative team. He spoke well, the best orator of the night, but he didn’t do much to convince me that PC culture was restricting anything. In fact, his real-life example was Israel Folau being challenged on his homophobic comments. Ikilei spoke of how it was ‘wrong’ for a Labour MP Louisa Wall to say that Folau’s comments could kill. “That is horrific. That is absolutely disgusting. And that is wrong,” he said of Wall, unintentionally paraphrasing much of the response to Folau’s original comments. In short, Ikilei used his freedom of speech to criticise someone for using their freedom of speech to criticise someone else for using their freedom of speech.

If nothing else, he sounded good.

Two of my flatmates joined me to watch Simon Wilson speak first for the negative team. He essentially read what would make for a pretty good Herald column about why Don Brash is bad. One of my flatmates loves Simon Wilson and I could see him nodding in agreement. The other loves to be edgy and disagree with everyone. He looked unimpressed.

“He’s not really arguing the point though, is he?” he said, angling for yet another flat debate. I was tired and mumbled something vague in disagreement before returning to the livestream.

“Why are the brave heroes of the free speech campaign so selective? Did you know some of them want RNZ to stop using Te Reo? That’s a complaint that we have too much free speech and it’s because of PC culture.”

It was a good and necessary burn. Because although the debate was pitched as being about free speech, it was really about Don Brash. And Brash, Wilson argued, had used his free speech in 2004 to derail the Labour government’s ‘Closing The Gaps’ policy, which aimed to assist socioeconomically disadvantaged Māori and Pacific Island ethnic groups.

“The attack on Closing The Gaps was, in my mind, the most egregious use of free speech we’ve seen in New Zealand in decades.” Wilson’s argument wasn’t just that PC Culture hadn’t restricted free speech, but that perhaps it should have.

In the Facebook livestream comments section, viewers debated whether or not KFC should be banned in New Zealand.

“Piper has a cold” is how the affirmative team’s second speaker, New Zealand student debater Piper Whitehead, was introduced. It was already clear that she did not want to be there, having looked supremely embarrassed when her team entered the theatre. Two minutes into her argument, I muted the livestream. It wasn’t that her thoughts were bad – in fact, on rewatching the debate, she made good points about the dangers of driving unpopular opinions to echo chambers such as 4Chan – she simply spoke incredibly fast and analytically. It was a good reminder of the importance of delivery. For all I know, everything she said was right. But judging by the crowd’s reaction, the livestream comments, and my own muting, no one was listening.

Luckily for Piper, she was followed by the night’s most perplexing performer, Fran O’Sullivan. If I wasn’t already aware which side the Herald business editor was arguing, I would’ve had trouble figuring it out based on what she said. Her extensive list of humorous PC gone mad moments in media was a “hello, fellow kids” moment if I ever saw one, followed by an endorsement of Brash himself and his challenging of property rights. “But back to my side,” she concluded. “I’m just giving Don a leg up because I think he needs it tonight.” I’m not sure what side she was arguing, which was perhaps her intention.

Arun, a New Zealand team mate of Piper, spoke last for the negative team. He spoke clearly and slowly, and did well to adjust when someone tried to heckle him. But even Arun couldn’t resist ending with a warning to his own side: “When people who claim to be politically correct feel the need to scream, shout and prevent people they disagree with from speaking, that doesn’t signal to people that you have confidence in your arguments. It signals to people that you don’t want the opposition to be heard because you’re afraid they might be correct.”

Three minutes later, a group of protesters screamed and shouted and prevented Don Brash from speaking. It was unfortunate timing to say the least, and allowed Brash to simply say “Madam, you’re proving my case absolutely, thank you.”

When the protesters had been quieted, Chris the moderator attempted to bring Simon Wilson back for his team’s conclusion. Instead, he too was yelled down and a chant of “Don Brash, Don Brash, Don Brash” was started. Brash returned to the mic, grinning, and said “I haven’t had this much fun in a long time.”

In that moment, Brash won. His actual argument was borderline incoherent and included the line “it’s impossible to ignore the possibility that Jewish culture is in some respects more advanced or superior to other cultures”. And yet he still won. Because where Brash would have typically spoken to a small tutorial room of PolSci101 students, he was now speaking to a full lecture theatre after receiving what must surely have been the first encore chant of his life. Even Wilson was forced to chastise a protestor who was disrupting Brash’s speech.

The whole debate was a bit of a farce. Two student debaters did their best to actually argue the moot, and four public figures presented their own personal opinions on various topics. At the end of the night, freedom of speech was not the talking point. Don Brash was. Which means he alone won.

Don Brash winning anything in 2018 means a whole lot of people are losing.